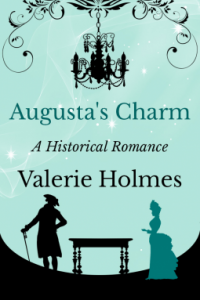 Augusta Harrow does not like her stepfather, Cornelius James Harrow, and the feeling is entirely mutual. Now with her beloved mother gone, he is all she has in the world. But that is about to change. Ordered to be his hostess one evening, Augusta thinks she is in for a boring party. But instead she finds herself surrounded by men, as her stepfather has decided it is time to marry her off.

Augusta is horrified, but what’s a girl to do?

The very next day she finds herself in an elegant carriage, being whisked away to the home of Benjamin Blood with her young housemaid Patience in tow. Augusta thinks the exotic looking man is to be her husband, but he tells her she is to be governess to his daughter Molly, and that they will soon be leaving for the Colonies.

Augusta barely has time to grasp what is happening when they arrive at Blood’s home. Wandering among the arches and long, dark corridors of Benjamin’s home, she overhears the cook making some strange comments to men hidden in the shadows. When she tells Benjamin, he pulls out two pistols and then kisses Augusta passionately. Then they turn to see the servants have pulled out their own guns. Augusta has always craved adventure, but this was beyond anything she had ever imagined.

Augusta, Benjamin and Patience race through the darkness, fleeing white slavers and men bent on revenge, as Augusta learns that her stepfather was not the man she thought he was, and Benjamin Blood might be more man than she can handle. Augusta’s Charm is a thrilling tale of danger, corruption, avarice, deception and blossoming love, peppered with gripping twists and turns.

It was the black cutout silhouette simplicity of the cover which caught my eye making me think of more “old fashioned” books of yore. The blurb, however, intrigued me with hints of action and adventure. But even that didn’t entirely prepare me for what I got. It’s a whirlwind that spins all over the place and perhaps tied up a bit too neatly at the end but it’s a wild ride to get there. There are a few PsoV changes that I wasn’t expecting given the early and lengthy viewpoint from only Augusta but some events were impossible for her to be at.

Augusta is not always a likable woman. She is quite aware of her position in society and thus won’t let Patience cross lines though she is kind to the girl. But Augusta shows her relative youth and also has moments of vulnerability such as when she longs for confirmation that she is like her beloved lamented mother. Sometimes she lets her feisty get in the way of smoothing over relations with her stepfather but he seems like a little dictator at the beginning though second glance shows he is probably not much more harsh than most men of position were in that age.

But what has she got into with the strange man who whisks her away from all she’s known? It appears even he might not be sure as events move along briskly. A creaky dank house, furtive servants and alarming overheard words do little to reassure Augusta in spite of all her fire and determination. In Benjamin Blood, Augusta is well matched. He’s got a touch of arrogance that sets her back up but he can deal with a whole pack of villains.

As spirited as Augusta is, she has the sense to acknowledge that “Mr. Blood” can get them out of a mess they still don’t totally comprehend. And as the adventure races on, she starts to appreciate just what she had and to look forward to what might come. This plot “twists and turns like a twisty-turny thing.” to quote Melchett from Blackadder. Within two page flips, some new character, danger or plot point appears. But there’s never a dull moment. With it’s shorter length, I did wonder how everything would be brought to a conclusion by the end but it was. Benjamin and his cohorts get their revenge, he realizes he could actually fall in love with spirited Augusta and she learns a bit of self control, loses some naiveté and just might fall in love with this man who has annoyed her, taught her and saved her life. After all, it’s a long voyage to the Colonies. B-