REVIEW: Lady of the Bridge by Laura Kitchell 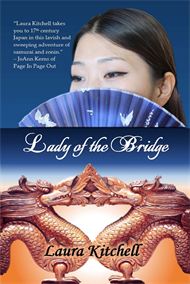 Forbidden love between a warrior princess and an elite samurai makes for an adventure set during the early days of the Tokugawa shogunate. Join this couple in a race across 17th century Japan where political unrest has created dangerous ronin, civil uprisings, and war-ravaged castles. Caught in the middle of the struggle between Shogun’s rise to rule and the old regime, this warrior princess is forced to battle for her life.

In the end, she must choose between family honor and her heart’s desire.

Years ago after I read and adored “Lady of the Imperial City,” I bought your next historical set in Japan and …. was afraid to read it. Yes, that’s a thing with me. I’m sometimes afraid that lightning will only strike once and I’ll end up being let down by my expectations so I sit on books for a while. Yeah well, I sat on this one too long and am kicking myself. Better late than never.

That book was set earlier and centered on the refined lifestyle in Kyo. It had a lot of humor to go along with all I gobbled up about the things mentioned in it. This story is a bit darker. There’s recent civil unrest that has almost torn Japan apart and former bloody battles mentioned all of which are part of the set up. There’s an iron-clad reason that Princess Saiko must be sent to Kyoto as the Emperor’s consort; as the daughter of the former Shogun, her marriage into the Imperial family and the potential birth of a son would cement the two families together and help end the bloodshed and wars.

Saiko is resigned to her duty. She knows what is owed by her to her family’s honor and is truly horrified at the thought of more deaths. With her time at home dwindling, she goes to spend time at her favorite place – an ornamental covered bridge in the gardens at her family’s estate in Sumpu. As she’s longing for a little time alone, she’s a little annoyed to discover a samurai already there. But his thoughtful words take her by surprise as he asks why she’s so sad. They talk more and she discovers a deep well of calm and intelligence in him. Knowing he’d never keep speaking to her as an equal if he knew her rank, she declines to tell him her name.

Takamori is amazed at the depth and breadth of this lady’s knowledge, education, and interests. She’s read about war and writes poetry, she knows drawing and painting, and she’s even studied archery and yawara. Hashi no Kizoku, the “lady of the bridge” as he calls her, is a woman he’s never dared dream of. As a samurai he’s devoted his life to serving his lord and not looking beyond today. He lives by the warrior’s code – “Duty and loyalty above all.” He could easily be dead tomorrow and is resigned to that. But this woman makes him want more – a future with her in it. Once he’s escorted the Princess to Kyoto, Takamori intends to finally discover who this woman is and claim her love.

Saiko dreads the moment when her stolen time with Takamori will end. It isn’t that her beloved father is being cruel but as his daughter, she knows where her duty lies and she won’t dishonor her family. But when Takamori finally discovers who she is, they’ll be up against more than even her father’s determination to see this marriage done. There is still unrest in the country and powerful men determined to quash this union and the way to do it is to kill Saiko. Can she and Takamori find a way to a future – if they survive long enough to claim it?

I’ll be honest and admit that I know only a little bit more about the early Edo period of Japan than I knew about the time period in the first book. I think I got about 1/3 of the way through the book “Shogun” and watched only an episode or two of the televised miniseries in the 70s so, yeah I don’t know that much. I did a little internet reading along the way and called to mind what I do know about samurai, katanas, and kimonos.

The early discussions that Saiko and Takamori have on the bridge told me about their broad and wide ranging interests and how meant they are for each other. I enjoyed Takamori’s conversations with his friend about “what now” in their lives as the fighting that has ruled their past up to now might be over. Saiko’s maid Okiko is a darling. She might not understand her mistress completely but she’ll stand by Saiko and can arrange a mean hair-style. Yes, that becomes important.

Once the road portion of the story begins, it kicked into high gear for me. Attacks by ronin, cross country flights, and castle fights prove even more that Saiko and Takamori are two of a kind and destined to be together. If only there wasn’t that pesky knowledge that her marriage to the Emperor is what will settle the country and help stop all the fighting. Sigh. As the page count ticked down, I honestly had no idea how this could be resolved as these two had already eliminated most of the alternatives I’d thought of. But yes, it happens and that’s all I’ll say about what. Now how it happens makes sense given Saiko’s actions, the Emperor’s detachment and sense of honor. Nuff said.

I hope you’ll revisit historical Japan at some point in another book. I enjoyed learning more about a different era of Japanese history and watching another perfectly matched couple overcome their obstacles to their HEA. B

→ Jayne
Previous article: Open Thread for Readers for April 2019
Next Post: REVIEW: The Inside Track by Tamsen Parker