REVIEW: Judge Dee and the Three Deaths of Count Werdenfels: A Tor.com Original by Lavie Tidhar 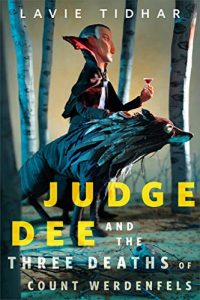 Judge Dee is back to solve a brand-new case involving the mysterious death of the vampire Count Werdenfels. The mystery? Who killed him. The twist? Three different people are proudly proclaiming to have committed the crime.

When I finished the first Judge Dee story, I said I wanted more and here it is. Poor Jonathan is trudging along through the cold with Judge Dee – again, and wishing for some hot food – again, as they head to the site of a murder at the behest of the Council – again so Judge Dee can attempt to come up with the answer to who really killed Count Werdenfels. Judge Dee, for his own purposes, once saved Jonathan who now acts as a servant to the judge of vampirekind.

The judge had found Jonathan under a pile of corpses a long way from there, on the Isle of Britain. There had been death and fire, steel and blood. There had been horror. The judge rescued him for a purpose and after that, for whatever reason of his own, kept him by his side. Jonathan was grateful, but he wished serving a vampire judge involved less cold weather and more roast pork. Or at least a nice fat chicken.

Someone has killed the three centuries old Count. Was it the Count’s vulgar widow? Or perhaps the French vampire hunter? Or maybe it was the ancient Roman vampire whom the Count had allowed to stay and who never left? All three claim to have done the deed and for a very specific purpose.

I enjoyed this short story as much as the first one though there are many similarities in the plot beyond just the set up. The clues are there along the way so the outcome wasn’t too much of a surprise. There was a bit more humor this time around –

‘Who are you?’ the judge said.

The old man said, ‘I am Helmut, sir. The count’s familiar.’

‘Is your mistress in?’

‘My lord’s widow is within. She is…*entertaining*.’

‘And yet vampires so rarely are,’ the judge said. ‘Tell me, were you close, you and your master?’

‘Were you *familiar*?’ Jonathan said.

The best part – again – is the relationship between Jonathan (who is closer to Baldrick than Dr. Watson) and Judge Dee (more Holmes than Blackadder) as Jonathan observes Dee sift through the contradictory testimonies and claims made by those with a reason to kill the Count. At the risk of repeating myself – more please! B

Judge Dee and the Three Deaths of Count Werdenfels can be read for free at Tor.

→ Jayne
Previous article: REVIEW: Judge Dee and the Limits of the Law: A Tor.com Original by Lavie Tidhar
Next Post: Bridgerton: A Discussion, Part I