REVIEW: Judge Dee and the Limits of the Law: A Tor.com Original by Lavie Tidhar 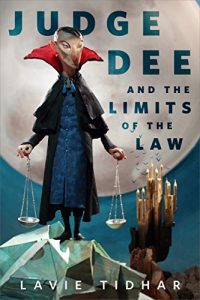 No vampire is ever innocent in Lavie Tidhar’s “Judge Dee and the Limits of the Law”, a Tor.com Original short story

The wandering Judge Dee serves as judge, jury, and executioner for any vampire who breaks the laws designed to safeguard their kind’s survival. This new case in particular puts his mandate to the test.

Last year I finally decided to read some of the Tor.com short stories that I’d been eyeing – mostly due to the cool covers – at Amazon. This was obviously one of them. Not sure just what I’d get, I dove in and was delighted with Judge Dee and his servant Jonathan.

Poor Jonathan is the long suffering and often disgruntled Englishman whom Judge Dee plucked from some only delicately hinted at horror and who now trudges along behind his master from case to case, dreaming of a warm inn and plenty of food. Instead of those, he usually has to make due with a stale bread and cheese eaten quickly and while shivering beside an outdoor fire. Judge Dee, one of the ancient vampires so old that if he were ever killed he’d probably turn into dust, doesn’t often remember or think of such creature comforts.

Judge Dee has now been called on to hear and decide a murder case. One vampire has accused a neighboring vampire widow of killing his brother. The two brothers live(d) in the flashy style Dee despises – openly carousing and turning countless minions. Just the manner to call undo attention and risk the ire and fear of human neighbors. There’s a way to survive to Judge Dee’s ripe old age and this isn’t it.

Judge Dee was a judge. He passed judgement. Vampires did not have many laws but the ones they had had been codified for millennia. And sometimes there were disputes. In such cases a judge could be sent for. This was one such case.

But who did kill the vampire brother and why? The answer is surprising and a neat twist. Since Jonathan’s is the only POV, he serves to give us a visual of vampire life and of the disputants in the case. Little clues are casually inserted in the story which all make perfect sense in the end. While reading about the case and trying to figure out “who dunnit” is entertaining, the best part of the story is the relationship between often complaining Jonathan and reserved, esthetical Judge Dee. I finished the story thinking, “More please!” B

Judge Dee and the Limits of the Law can also be read for free at Tor.