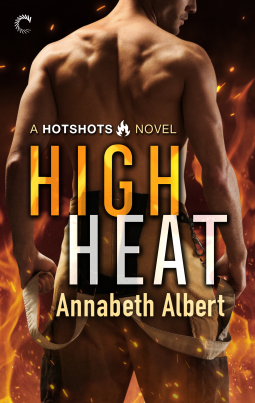 High Heat is book 2 in your Hotshots series, set in and around the firefighting/forestry community in the fictional Central Oregon town of Painter’s Ridge. I haven’t read the first book, Burn Zone (it’s on the TBR), but it’s not necessary to have done so to enjoy this novel – it stands alone well.

Garrick Nelson is a “smoke jumper” – the kind of firefighter who jump out of planes in the middle of forest fires. It’s a dangerous, high risk job. A fairly common way smoke jumpers are injured is being “treed”, ie, they become trapped in a tree when they’re parachuting into a fire. Such an incident happened to Garrick about a year before the book begins. He sustained serious injuries, including two broken legs and an incomplete spinal injury. He has been working hard on his rehabilitation and is now able to walk with the use of crutches (though not for long periods and certain terrain is very difficult for him to navigate). He uses a wheelchair the rest of the time. He starts the book determined to return to smoke jumping, the job he loves. No-one thought he would ever walk again and look where he is now? He is motivated and determined and not afraid of hard work. He’s going to make it.

His disability does mean that when a scared stray Rottweiler/Pit Bull/Labrador mix turns up on his front porch, he is unable to reach her without her being scared by his crutches or wheelchair. He goes across the road to his neighbour, Shirley, only to find her grandson, Rain Fisher, who has come to stay with his grandma for the summer. Rain is only 23 and looks younger; Garrick is immediately attracted but thinks he’s too old (he’s in his mid-30s) and he’s also a bit nervous about Shirley’s opinion so he doesn’t really think anything can happen. But Rain loves dogs and offers to help Garrick with “Cookie” the dog who ends up finding a home with Garrick even though it was supposed to be temporary. (We all know how that goes Garrick. It was inevitable.)

Garrick is pansexual and Rain is gay. As it happens, Rain has a thing for very masculine presenting guys and buff Garrick is everything Rain finds attractive. And, Garrick has a thing for confident men who like sparkles and tight t-shirts and short-shorts.

Rain had hoped to join the fire department in Portland but was unsuccessful in his application. He’s hoping to maybe pick up some work in the Painter’s Ridge area and would like to build his fitness to become a member of a hotshot team. Garrick and Rain make a bargain; in return for walking Cookie and taking her out a couple times a day, Garrick will act as a personal trainer for Rain to improve his fitness to try out for a hotshot team. (Their fitness requirements are extreme and Rain is, while not out of shape, not able to currently meet them.)

Garrick and Rain are therefore in close proximity to one another and this allows the mutual attraction to smoulder and eventually ignite (see what I did there?).

Rain was raised in a hippie community where he had few personal possessions and often felt overlooked. The community was very loving and there were many things about it that were awesome but some aspect of the experience have left their marks. Rain has been something of a dilettante, flitting from one potential career to another and everyone – his family, his grandma, his friends, thinks he’s a person who doesn’t stick, who won’t stay. He’s learned to hold onto things lightly because getting attached just means its harder when the thing is taken away from him.

Garrick was engaged before but his fiancee left and so he’s a person who’s worried about getting into a relationship with someone who won’t stay. And, he’s not sure whether he can even have sex anymore because for a long time things haven’t been working and he’s only just started to have some sporadic and unreliable arousal (largely related to Rain it’s true) – is there any point in attempting a relationship?

But Rain is so attractive and Garrick thinks, well, maybe they can do a fling?

Of course, both men catch feelings. The central conflict is around that push/pull of will he stay or will he go and each man’s ability to trust the other with their hearts. Along the way, Garrick has to come to grips with the consequences of his injury and what it means for his future, Rain has to consider what will make him happy and what part of that includes a career (and what sort of career).

Rain is delightfully open and frank about his desires and is able to coax Garrick into getting some specialist help for his sexual dysfunction. In addition, he’s also happy to explore what sex looks like for Garrick now and doesn’t require penetrative sex all the time to be happy and satisfied. Their intimate relationship is creative, inventive, satisfying and fun.

I liked the way Garrick and Rain communicated with one another. It was mostly Rain at first but he did inspire Garrick to open up and they worked really well together to build a solid relationship and friendship. There were no big misunderstandings to irritate me; the conflict was organic and made sense, the resolution did too.

I especially enjoyed the broader family in the story; Garrick and his dad, Kenny, were very close, as were Rain and his grandma. The little details about Rain’s veganism and Garrick’s support of that, taking into account nutritional requirements for firefighters just helped to build that sense of realistic world-building too.

There’s an Author’s Note at the end which talks a bit about the research you did in relation to spinal injury. I have some limited knowledge of the topic but no personal experience so I’m no expert myself. But it seemed like a well-researched, authentic and sympathetic representation of the kinds of things which people who have such injuries experience. It is of course made more difficult by the US health care system which is something which baffles me (I gather I’m far from alone in that). There wasn’t any information in the book about workers compensation. Here in Australia, Garrick would be fully covered for treatment, wages and expenses but I gather it doesn’t work the same way in the US. I chose to go with what was in the story and take it on face value but I admit I’m curious as to what workers compensation coverage smoke jumpers have. It seems to me patently unfair for Garrick to have to rely on his own insurance for a work injury. I come from a totally different cultural environment so I can’t comment on whether the portrayal in High Heat was accurate in this aspect. I expect it was though.

High Heat was an entertainingly good read with a great sense of community, fairly low conflict, largely character-driven rather than action-driven. Plus: dog! I liked it quite a bit.