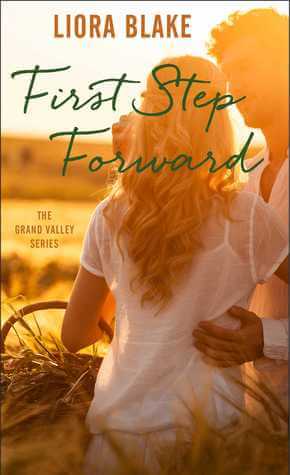 First Step Forward is the first book in your new Grand Valley series. Even though it is not New Adult, it is written in the same kind of style, with alternating first person present tense chapters from each of the main characters’ point of view. I actually like this style so it was a pleasant surprise but I know there are a lot of DA readers who want first person and/or present tense to die a fiery death.

Cooper Lowry is a wide receiver for an unnamed Denver NFL team. He’s played professional ball for eight years and realises he’s coming to the end of his career. He’s not ready for it; football is his sole focus and his one great love. When the book begins, Cooper has just been hit hard by a player by the nickname of “Stinger” and suffered a concussion.

I can’t say I liked Cooper all that much when I first met him. He was a bit of a dick.

On a forgiving day, the media refers to me as quiet, taciturn, or reserved. Every other day, they just say I’m a prick. There’s truth in both.

I was particularly unimpressed by his wishlist early in chapter three.

I don’t want a woman with a six-pack. I want her belly toned but soft, I want her ass firm but full, with plenty up top to keep me occupied, and I want some hips to hold on to. Ones that don’t include hip bones threatening to cut me open if I have her under me. In short, I want her to look and feel and move like a woman. And Whitney is nothing but perfectly toned, perfectly rounded, and all woman.

Or here when he’s reflecting on the “jersey chaser” he had in his bed the night before.

Once we got going she talked dirty, but it was a poor showing. I’m all for a girl who lets me know, in explicit detail, exactly what she wants or how she likes it, but at a certain point, I just wanted her to be quiet for a while. So much that we went a second round because I thought I might lull her into a silent stupor if she came hard enough.

Cooper did grow on me and his behaviour did vastly improve. I ended up liking him quite a bit – and that’s staying something because he was in negative numbers at this point in my read. Anyway, back to the plot.

Seeking out Epsom salts for a bath to help his aching muscles after the game in which he sustained a concussion, he is assisted in the pharmacy by another customer, Whitney Reed.  Whitney is in Denver to meet with her bank manager to try and renegotiate the loan on her apple orchard in Hotchkiss, in upstate Colorado. She is a short step away from foreclosure and losing everything she loves and her only remaining connection to her father (she used her inheritance to buy the orchard).

The next morning, Cooper and Whitney meet again and sparks of attraction fly. Leaving with a jar of Whitney’s apple butter (not a euphemism), Cooper isn’t sure he’ll ever see her again. When the team doctor sends him away with strict instructions to take it easy and not do anything strenuous or vigorous (that means no sex as well), Cooper decides to take a spin out to Hotchkiss. It’s only a five hour drive. It’s practically the next town over right? Let’s face it, Cooper was pretty much gone once he met Whitney (notwithstanding the woman in his bed the night before. There were no repeats by the way. After this point it’s all Whitney for Cooper).

Whitney and Cooper enjoy making chutney together (also not a euphemism) (it was actually educational; I even Googled water bath canning) and things progress sufficiently that Cooper is incredibly tempted to ignore medical advice about vigorous activity. It was about this time I started to like Cooper and appreciate his sense of humour.

Then it’s just me, standing here in my dark gray boxer briefs, waiting for what’s next. All I can think about is this line from a movie my high school girlfriend insisted we watch on repeat.

I’m also just a girl, standing in front of a boy, asking him to love her.

Fucking Hugh Grant movies. They’re like the earworms of romantic comedies. I’m stuck in place, half-hard, and all I can think is: I’m just a boy, standing in front of a girl, asking her to do something, anything, to make his cock stop hurting.

The romance developing between Whitney and Cooper is relatively conflict free. They’re adults, pursuing a relationship, getting to know one another. Whitney, having failed to renegotiate her bank loan but still trying to secure new financing is facing looming foreclosure and Cooper suffers a further injury which causes him to face the possibility of not playing football anymore. Both of those things are very important but they don’t really threaten the relationship.  I guess I was expecting something to happen to threaten the romance but when it came, it came late and it wasn’t very melodramatic. Cooper and Whitney like each other. They have great sex and enjoy each other’s company. And, when things are threatened very near the end of the novel they, for the most part, maturely consider their options before reaching their HEA. In that way, it was refreshing and unlike many novels I’ve read.

I enjoyed the developing relationship but I also found it fairly easy to put the book down and I sometimes lacked motivation to pick it up again. Partly that’s the remaining hangover from the Trumpocalypse and therefore not the book’s fault, but partly, I think it was that there wasn’t any real barrier to Cooper and Whitney being together for most of the book. When I read, I enjoyed the story. I liked the style and I liked (in Cooper’s case, after a while) the characters. But I didn’t feel compelled to keep going, to find out what happened next and there wasn’t really any “OMG are they going to be okay??” moment for me. Sometimes this is a good thing of course and if any DA readers are looking for a couple of adults mostly acting like adults without a lot of unnecessary drama, this book could be just the ticket.

I’m pretty sure he still genuinely likes her—thinks she’s beautiful, loves to see her smile, and wants to keep her happy.

I get that now. The way a woman can be so goddam likable and gorgeous, you just want to try to be less of a jerk than you usually are and do whatever it takes to keep her happy. That’s all. OK, maybe I want to keep her naked, too. But happily naked.

And I liked the scenes when he was with his family and clowning around with his brothers. They showed a more human side of him than I saw in the early chapters of the book. I really liked Cooper’s brother, Mikey. I had to laugh at the first conversation he had with Whitney – the representation of the shit siblings can give each other was perfect.

“I’d like to start by apologizing to your ears. Please don’t leave Pooper because I hollered like that. He’d never forgive me if I ran you off and he’s a crybaby when he doesn’t get his way. I know, because he sniffled his way through the first ten years of his life. I was there as witness.

(Pooper is not a typo – that’s the nickname his brothers – there are four – gave to him as a child. LOL)

I’ve said a lot about Cooper so far but I’m sure one of the reasons I ended up liking him as much as I did was because of Whitney. She gives him crap about some of his more neanderthal attitudes, she stands up for herself and maintains her independence. They work their way towards mutually acceptable compromise as she whips him into shape – like here when he is insisting on driving her truck to a farmer’s market they are both attending:

I count to ten, then open the truck door myself and step out, outstretching one arm to hand him the keys. He reaches for them. I yank them back.

The word is right, but the tone is all wrong. Mischief with a touch of sarcasm. Not nearly enough hangdog humility for my taste.

But Grand Junction is over an hour away, which leaves enough time for me to sharpen my tongue like Dorothy Parker and lecture him on suffragettes. Perhaps remind him that my father is dead, so a dowry is out of the question. And I’ll spend whatever time is left over declaring exactly how much I like having the right to vote and being able to wear these here trousers.

I loved how Whitney loved Cooper for himself and not for his money, not for his fame and not for his sporting prowess. It was her seeing him apart from all of those things that enabled him to begin to see what life after football could be for him and that it could be good. I liked how Whitney did not want Cooper to fix all of her problems but that she was also sensible about letting him help out occasionally, without sacrificing her principles. The resolution indicated another of those compromises which I thought placed them on equal footing although I guess it could be taken another way by a different reader.

Whitney didn’t really follow football but for Cooper, she began watching Friday Night Lights (to learn. She came for Cooper. She stayed for Tim Riggins. As one does.) And for Cooper she cheered wildly when he was completing an amazing play.

Whitney is a cheer squad for Cooper but not in a fawning way. And Cooper is the same way for her, encouraging her ambition with the apple orchard – even if he does start looking for magic goats (you have to read the book to understand about the magic goats).

While the story was fairly low conflict, I did end up enjoying it quite a bit. There’s a lot to like about Cooper and Whitney and the people around them and overall, I definitely counted First Step Forward in the win column.