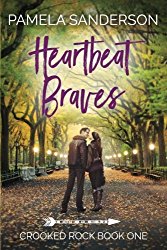 Rayanne Larson knows firsthand the struggles of native people. Working at Crooked Rock gives her the chance to do good work for Indians living in the city. She has high hopes for the Center’s progress until its new leader hands her special project over to his underachieving¬¬—and distractingly sexy—nephew.

Henry Grant’s life is going just fine. Though he knows rez life, he’s always been an urban Indian. He has no interest in the Indian Center job his uncle pushes on him. That is, until he meets Rayanne. She’s attractive and smart, and like no woman he has ever met.

Rayanne is determined to keep her distance but when the Center faces a crisis, the two of them are forced to work together and she can no longer ignore the sparks between them.

I knew there was a reason I still hadn’t worked on my best of list for this year and this book is it. Yep, it’s going on it for a number of reasons but I’ll cut to the chase and say it’s one of the best overall books I’ve read this year.

When romance readers hear the description “Indian romance,” it generally conjures up images of atrocious historical bodice rippers complete with cringe worthy names for the Indian characters and appalling cultural mistakes. Personally, with the exception of Kathleen Eagle, I’ve given up on them. Or I had until I read the excerpt for this book and decided to take a chance.

Set on the west coast, it’s a contemporary view of modern Indian life as lived by our group of employees of the Crooked Rock Urban Indian Center. Like all who work at non-profits, money is tight, the needs are great and there’s always someone trying to shut you down. Rayanne, Ester, Tommy and director Linda struggle every day to do more with less. Then a board member and old friend of Linda’s, Arnie, saddles them with his nephew Henry who knows nothing about the job or what they’re trying to do – to provide a place and services in the city for Indians away from their home reservations.

Last year, they almost got shut down but managed to finagle one more year to prove their stuff. Now they’re so close to a building of their own where they can do so much more, so much that they dream of providing but haven’t had the space or grant money to do yet. Rayanne doesn’t bother to hide that she thinks Henry is waste of space even if he is hot. When Arnie bulldozes Henry into taking over her projects, she’s even less thrilled – if that was possible. But she’s a professional and will help then let him sink or swim on his own.

As the challenges and setbacks mounted, I felt myself pulling for them all. There had to be a way to save the Center and keep doing the work of bringing urban Indians together. Henry wasn’t going to be a dick, Tommy was going to get their used bus working to transport the elders to medical care appointments, Ester would keep the IT and tech stuff humming along, Rayanne would by sheer force of will get their festival set while Linda would salvage buying the building they were pinning their hopes on. I was ready to pull out my checkbook and mail a donation. Well, not all of that happened. But what did happen occurred realistically and believably.

I loved the humor in the story, very deadpan and laid back but with a zing. This is a book that almost reads itself with great dialog that zips along almost effortlessly carrying me with it. The characters felt real to me and I got invested in them. Strong women? This story has them. The conflicts with the universal problems of elder care, tension between parents and children could happen to any group. But the story is deeply grounded in Indian characters instead of just wallpapering the book with them. References are made to the differences between tribal practices, languages and traditions. But it doesn’t come across as a social studies lesson. It doesn’t shy away from the problems faced by modern Indians either. Yet there’s plenty of romance, an upbeat ending and a hook I don’t mind that gets me excited to read the next book. It absolutely earns its A grade.