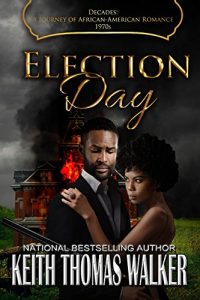 Despite legal efforts to integrate schools, black students continue to struggle with separate and unequal environments in 1970. Leo Sullivan, an ambitious mayoral candidate, seeks to close a dark chapter in Overbrook Meadows’ history, but the opposition is fierce. Falling for his campaign manager was never part of the plan. Leo and Carla must fight for their love, their safety, and the future of their beloved city.

I continue to be impressed by the “Decades: A Journey of African American Romance” series. “Election Day” uses the efforts to integrate schools – even years after the 1954 “Brown v Board of Education of Topeka” decision – as the basis for the events of this book. The details of court rulings provided after the story illustrate the struggle continues.

After the Black community living around Overbrook Meadows watched their high school graduates earn their diplomas in 1971, families gathered to celebrate. Leo Sullivan, the most prominent Black attorney in town just wanted to enjoy his niece’s accomplishment but his sister had other plans forcing Leo to acknowledge that their hometown was deliberately dragging its feet in integrating the school system despite the numerous Supreme Court decisions on the issue. After a stunning meeting with the white mayor, Leo agreed to her suggestion to meet after church and get a community action plan going.

Change could have already been done but everyone knows that it will have to come from the top. Leo sees that. What he didn’t see coming was the actual plan that the community wholeheartedly endorsed – to whit that he will run for mayor. His protests that he’s not a politician are met with an introduction to Carla, a local teacher who knows first hand the inadequacy of the high school and who was instrumental in getting a Black candidate elected to the town council. Soon Carla is running Leo’s campaign and drumming up support. She’s also trying to get Leo to believe that he’s actually got a chance. But what will happen when their efforts begin to bear fruit and those opposed to integration begin to fight back?

What really struck me throughout the book was how connected I became with the characters’ emotions and how well these were conveyed. Leo’s sister Mildred – who is a Force to Be Reckoned With – gets not only Leo but the reader to face the inequalities that the Blacks in town experienced not only in schooling but in housing. Leo, who as an educated professional was respected not only by Blacks but also by many in the White community, had been coasting along thinking that things were getting better. Mildred makes him stare the shortcomings in the face.

I was surprised that Leo is at first gobsmacked by how forceful and strong Carla is given how similar Carla is to his own sister. I would have loved to have seen more of Mildred but Carla takes no prisoners and carries the banner forward for Forces to Be Reckoned With. Thankfully Leo has the smarts and sense to appreciate Carla for who she is. Their relationship blooms against the backdrop of the efforts they make to get Leo elected and if at times this took a bit of second place to the mayoral race, given that this is a novella, I could understand.

When the forces determined to stop the campaign kick in, things get dark very quickly. Terrible racial slurs are uttered, understated but real threats are inferred, fear is deliberately invoked, and the bravery demonstrated by those determined to stand up and demand what is right is displayed. The issues were ugly, the tactics used to continue them were horrible, and I appreciate that none of this was downplayed.

In addition to More Mildred, I wish more had been done with the slightly scummy town council character but perhaps Carla turned her attention to getting him replaced. Two other (real life – yay!) characters were great additions and I wouldn’t have minded more of them or more stories based on them (hint, hint). Thank you for this grassroots look at what was needed to try and even the school playing field even if we still have a ways to go. B