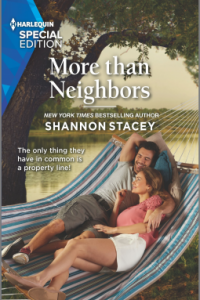 The only thing they have in common is a property line!

He’s trying to uncover his past.

She’s hoping for a brighter future.

Cam Maguire is in Blackberry Bay to unravel a family secret. Meredith Price has moved next door with her daughter. He’s unattached. She’s a widowed single mom. He’s owned by a cat. She’s definitely team canine. All these neighbors have in common is a property line. One they cross…over and over. And Cam thought he knew what he wanted—until his family’s secret changes everything.

The cat and dog mentioned in the blurb lured me in. Plus the cover image with a hammock. Yes it was the cat, dog, and hammock. That’s my story and I’m sticking to it. But why weren’t the cat and dog on the hammock? Oh well, can’t have it all.

I’m sometimes leery of a small town setting. Too often the main characters end up there against their will and then have to deal with the whole town knowing their business. That kind of happens to Cam here and people notice stuff but I didn’t mind it. Meredith grew up in Blackberry Bay (and why do so many small towns have either Bay or Cove in the name??) and returning home is something she wants to do. She wants the small town life, to be near her parents and hopes her daughter will settle in and grow to love it.

Cam is there to find himself – literally. Though his past is convoluted, it started in this small town and he felt drawn to come there himself rather than get family flunkies to empty out the cottage left to him by the grandmother he never knew. Fate keeps tossing him and his cat together with his pretty neighbor, her book loving daughter – who is sad that Cam has never, ever had a library card, and her dog.

I like that things aren’t smooth sailing and Cam and Meredith have to learn when each is joking.There are moments of irritation – lawnmowers at 8 am on Sunday morning, a cat swiping her claws at a dog who gets too nosey. And neither one is looking for romance. Well, of course not, this is a romance book after all.

Cam’s past was a bit hard to believe and I wonder just how much of a secret it could be in his family’s rarified wealthy circles. Cam’s also a bit of a reverse snob but given said family I could understand. The town does get a little prying at times but it’s all done in love and isn’t annoying. I think I see possibilities for future characters to get books and actually hope this turns out to be true.

The conflicts are believable for Cam and Meredith who both act maturely. Meredith has to think of her daughter and Cam soon begins to figure Sophie’s needs and feelings into his actions, too. Plus there’s Elinor the cat. Elinor (Cam was delighted to be able to discover and tell Sophie that the cat is named for a book character) comes and goes as she pleases and basically acts like a real cat. I should know. Soon Cam, who’s never had a pet in his life, is thinking about Elinor’s needs as well. And drinking his morning coffee from a pink cat mug.

He might not have had a loving family but Cam comes to recognize that this is what Meredith and Sophie have together. He finds that he can sink into that with relief as if he’s finally coming home. Cam likes the person he’s becoming here.

A man with a cat. A man with a fun, sexy neighbor. A man who liked to play catch with Sophie and her yapping little dog. He was a man who sat on quilts in the grass and ate cotton candy. He had a library card. He liked this version of himself.

But he and Meredith take care to try and separate their growing romantic relationship from Sophie for reasons that make sense. But they enjoy themselves. A lot.

As she leaned forward, he rose up on his knees and their mouths met halfway with a hunger that left no doubt she hadn’t shaved her legs for nothing.

Until Cam’s life in NYC crashes into things but also in a believable way based on how his family has been described. There is one character who really pissed me off. But then this same character goes on to tell Cam some home truths and ends up setting him free.  Still booyah for Meredith that she insisted Cam speak with her alone before saying anything to Sophie ’cause, yeah, Meredith’s a good mom. B+

He lifted her off her feet and kissed her so hard it took her breath away. The weeks apart and the tears were all but forgotten as she wrapped her arms around him and held him close.
It was the high-pitched squeal that finally broke up the kiss. As Cam set her on her feet, she turned to see Sophie staring at them. She was clapping and bouncing up and down on her toes, with a yipping Oscar on one side of her and Elinor on the other.
“Our family is excited for us,” she said, looping her arm around his waist.
“I’m not sure about the cat, actually.” He kissed the top of her head. “But I love the sound of that. Our family.”