Plain Daisy Gillard leads a quiet life, helping her parent’s run their antiques shop. Until handsome pediatrician Mr. Jules der Huizma sweeps into her life and becomes her personal knight in shining armor! When he whisks her away to Holland, she can no longer deny she’s falling for him. Only charming Jules is engaged to another woman, leading Daisy to wonder if he can ever truly give her his heart and make her his bride…

I picked this Neels book to read next partly because it’s the second in a loose trilogy in which I’m starting backwards with “Dearest Eulalia” and partly because of the way Sunita described it to me. IIRC she said something about how the heroine falls in a Dutch canal and is fished out by the hero. Not exactly a meet-cute but it did catch my attention.

We start the story with Daisy Gillard who is a young woman living in a small English town and who enjoys walking on the beach regardless of the weather. Currently she has a boyfriend but immediately we know he’s a loser. No actually Desmond is a dickwad. At first Daisy is infatuated with being infatuated with him but his dickwadish behavior eventually peels back the blinkers of infatuation from her eyes. Daisy realizes he’s a cad.

Someone who is not a cad – though he is blunt in his opinions – is Mr. der Huizma. At first we see a man who knows his antiques and has an eye for gifts which he finds in Gillard Antiques. He also admires the young woman who enjoys walking in gale force winds on the beach as does he. Unknown to Daisy he’s also a busy consultant (US = Attending physician) with throngs of registrars (residents), housemen (interns) and competent nursing Sisters hanging on his every word and physical exam of his pediatric patients. He also holds a position in a hospital in Amsterdam as well as manages to spend time with his family and delightful dog Bouncer. Obviously he pencils in “sleep” on the Optional List of his things-to-do.

Daisy’s dad spots what could be – and turns out to be – a lovely antique Dutch screen at auction which Daisy skillfully repairs and restores much to the astonished delight of a pair of elderly Dutchmen who spot it in the store. Purchase made, Daisy is deputed to shepherd it across the channel to its new home and then investigate a potential purchase at a store there. Daisy delivers the screen and stays for a (surprisingly for a Neels Dutch location) mediocre dinner and breakfast – though the coffee is delicious – then shrewdly bargains for the Georgian wine cabinet from an antique store before sightseeing.

Daisy isn’t even taking a selfie when she accidentally falls backward into a canal then comes up spewing nasty canal water. Luckily two people are there to haul her out and oh, guess who one of them is. It does cross her mind that the man she’s been spending time thinking about would be the one to see her looking like a drowned rat but, after she thankfully barfs up the canal water she swallowed, he calmly hauls her across to his hospital where she’s turned over to a Sister then stripped down, shoved under a hot shower, given a jab for the rats, bundled up then taken back to her hotel by her handsome savior. It’s a good thing most Neels men are doctors and aren’t upset by vomiting heroines ridding themselves of nasty Dutch canal/ditch water .

All too soon Daisy achieves “frequent flyer” status at the hospital after she’s mugged the next day and left unconscious. Jules der Huizma is told “to leave her alone” by a drowsy Daisy and, after a consult with his colleague rules out brain damage, contacts Daisy’s dad. She muttered something about a Georgian wine cabinet, Jules says. Oh yes, she was bringing it home, dad replies. Jules adds another thing to his “to-do” list.

Soon Jules is helping Daisy take the wretched wine cabinet back to England and then engineering Daisy’s return to Amsterdam as an antique store shop assistant. He thinks he’s just being nice but we know better. Of course he volunteers to chauffeur Daisy around Holland so she can see a bit more of the country and then takes her to meet his mother – still just being nice, still just fooling himself. I mean, come on, he carefully notes that Daisy and his mother like each other from the get-go. Mevrouw der Huizma is delighted with this young woman who is so unlike the cold, beautiful selfish witch Jules is engaged to. Sometimes Neels’ heroes need a good smack over their first fiancees.

Is Jules finally going to come to his senses? Will the Evil Other Woman be removed from his life? What will be the medical emergency in this book? And can Jules persuade Daisy that he really loves her and wants to marry her? 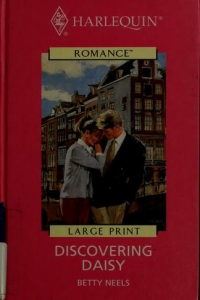 I like that though Daisy is considered “plain” (though she does have nice eyes), she’s very competent in her father’s antique business and has mad restoration skills. It’s also amusing that the first Dutch house she sees (17th century with probably older parts behind) is filled with antiques but, contrary to most Neels books, none of them to Daisy’s tastes – too dark, heavy and Germanic looking. Daisy has an eye and knows what she likes.

She also has her uncrushable jersey dress and a large amount of common sense as well as the chutzpah to (politely) tell off not only the Evil Other Woman but also a mannerless young man who interviews her for a job. Dickwad Desmond is clearly far in her past. A lot of the book is spent with Jules and Daisy still either denying what they feel or thinking things are hopeless as both are determined to keep poker faces in the face of love. There is much food eaten, much tea or coffee drunk and we see that Jules knows his way across British roads and where the best places to consume all the food and drinks are.

When he’s finally acknowledged his feelings and is free of the Evil Other Woman, Jules proceeds to rearrange his schedule so that he can woo the woman of his dreams. Let me quote from the scene that clearly shows he’s a man on a mission and will engage in competitive shopping to win Daisy.

She was reaching for Assam tea, always on the top shelf and almost out of reach, when a large hand lifted it down.

Daisy turned to face him. It really was too much. Why couldn’t he just go away? She voiced the thought out loud.

‘I came to England—and it was most inconvenient too—to talk to you, Daisy. That was impossible at Totnes, so I am reduced to going shopping with you.’

Daisy put two tins of Italian chopped tomatoes into the trolley. ‘Well, whatever it is you want to talk about, we can’t do it here.’

‘Oh, but we can! It is hardly the ideal surroundings, but I haven’t the time to look for a suitably romantic background.’

He tossed two tins of asparagus tips into the trolley, and then added a packet of ravioli. Daisy reached for a jar of coffee and he, not to be outdone, added three tins of cat food.

Then we will take it back with us; Jette has a cat and kittens.’

They were going slowly along the shelves, the list forgotten, although from time to time Mr der Huizma added some item or other to the growing pile in the trolley. At the end of the narrow aisle he put a hand over hers on the trolley handle.

Jules der Huizma will not be denied! Better get used to being loved and adored, Daisy! B

Currently the only digital edition of “Discovering Daisy” that I can find is a twofer with a book by Caro Carsen. I haven’t read that book but have liked her military series.