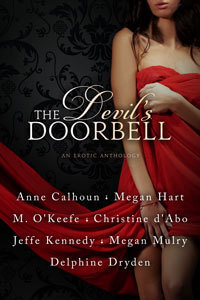 In the Garden by Anne Calhoun

Kelsey is in England for the wedding of her BFF from college. The wedding is a weekend affair at a beautiful country estate. One of the groomsmen, Julian, is a dead ringer for a guy who broke Kelsey’s heart some years earlier. He has the look of a bad boy about him and she’s been burned by bad boys before. But still…

The attraction is obviously mutual and when Kelsey decides to (effectively) fuck the bad memories of her ex away with his doppelgänger, Julian is on board with the plan.

There is more to their connection than the memory of another guy however and the story ends on a hopeful note; it’s clear that Julian might look like the other guy, and yes, he’s a bit of a rogue, but he’s not a dickbag and maybe there can be excitement and passion alongside respect and courtesy, instead of one or the other.

An excellent beginning to the anthology. Win.

Warm Unholy was my favourite of the short stories (though it was a close fought race). The reader doesn’t initially know the name of the narrator – the opening line is “Tonight, my name is Mary.” Our heroine takes on different personae, complete with wigs, outfits and even coloured contact lenses, and then, she goes to a bar and picks up a suitable stranger to have sex with. The Circle2 bar is near a hotel where travelling businessmen stay and it is a prime location for the kind of hookups she is after. There are no repeats and it’s all about sex and nothing more.  The bartender there is attentive and kind and seems to watch out for her. But he can’t know she’s been in the bar many times before. Of course he can’t.

There is a lovely melancholy to this story. Not-Mary is seeking anonymous hookups for a reason and her efforts to disguise her true self are an indicator that there is more going on. Partly she is exploring her sexuality, partly she is protecting her heart and partly she thinks the real her is insufficient to attract and keep a man. The bartender (who is also the owner of the Circle2) is cleverly shown to know more than Not-Mary thinks even while the entire tale is told solely from her POV.

It’s an unusual story in that I found it very romantic and the ending definitely qualified as HFN – but most of the sex Not-Mary has in the story is with other men and not the hero. There even one encounter which is vaguely non-consensual (she does consent but my sense was he (not the hero) didn’t care all that much whether she did or not). Readers may want to consider whether this could be a problem for them.

Maggie is a curvy redhead who has decided that being the good girl and pleasing everyone else but herself is not going to cut the mustard anymore. In a few short strokes the author conveys just what an absolute douchebag Maggie’s ex was and how much of a number he did on her head. But that’s over now and Maggie is going to wear red leather boots if she wants to, even if they’re possibly impractical and even if they’re expensive. She’s going to wear cleavage-revealing and clingy dresses and embrace her curves rather than tone everything down/being invisible. A colleague at work notices the new improved Maggie but, importantly, he was pretty impressed with Maggie 1.0 as well.

Red Leather is short – there’s not much more than a sexy after hours interlude in the stationery closet – but the characterisation is such that it was obvious that Maggie and Tim were destined to spend a lot more time together and Maggie 2.0 turns out to be the authentic version of herself. It’s empowering and happy and I liked it very much.

I’m not good at subtle. In a longer story, I can eventually (mostly) get on board and figure it out but in a short novellette, it’s much harder for me. I admit I spent some time being a bit lost here. Drowning on Dry Land is definitely not a romance – if it were longer, perhaps it had the potential to be one, but as it was, I can’t shoehorn it into the genre (and those who know me know that I tried!).

The vibe is very melancholy. Bette is a Domme who is in a relationship with Damian. He loves her and she knows it. She is still hooked on someone else (a jerk, of course). It’s kind of the erotic equivalent of Meatloaf’s Two Out of Three Ain’t Bad.  The story isn’t really about her relationship with Damian – it’s more about her moving on from her previous relationship with Mr. Jerk. The ending is vaguely hopeful in that she is now free to love elsewhere but I was left with little confidence Damian was going to be the love of her life. I’d love to be wrong on that. He seemed really nice (I am such a romance reader!).

Devil in the Dark by Christine d’Abo

I thought it was a really clever play on the anthology’s theme. The app is all about women taking control of their sexual agency and selecting what it is they want to do and how far they want to go with a particular guy (or girl).

Shona’s app is a rousing success. There’s a very hot encounter in a semi-public area. This story is also more erotica than romance but there is a hint of possibly more and I had no difficulty imagining a future for Shona and her hookup.

This one’s an F/F (well, both main characters are bi, but in terms of this story the focus is on F/F). Maddy is in London for a year. She’s nearly 30 and recently divorced. She had to sell her share of the design business she and her husband ran together and with it, she has a small nest egg to fund a kind of “gap year”. Her sexuality had been fairly bottled up in her marriage and now she’s free to explore her bisexuality and have intimate (and not so intimate) adventures.

However, London is very expensive and her nest egg isn’t going to last as long as expected. On a whim she begins to look for people advertising for some kind of sexual au pair. She replies to an ad for a “facesitter”.

Much to Maddy’s surprise, the mysterious advertiser is Cybelle. She’s gorgeous and married and obscenely wealthy and did I mention gorgeous? Her husband (also bisexual) and she have an open marriage and from time to time both have arrangements with other people.

The story is super hot and quite a bit of fun as well. I liked it very much and hardly noticed that it very clearly isn’t genre romance. :P

We Are All Found Things by M. O’Keefe

I mentioned earlier (and in many previous reviews) that I’m not great at subtle. I tend to want clarity and if it’s not there, I can find myself getting frustrated. I guess I’m not a person who can easily just go where a story wants to take her, without knowing the general direction. I like a little road map to start with.  This story is far more the former than the latter.

There is a vibe to it which I think those who loved Everything I Left Unsaid will enjoy. I find there is a distinct difference in writing style between Molly O’Keefe and M. O’Keefe.

Rennie is a sculptor (is it still called sculpting if the work is done in metal and using an arc welder?) who creates in a loft in Minneapolis. It’s not in a good area and she’s after someone to live in the upstairs apartment to report break-ins to the police and generally protect the place. Luka applies to be the tenant.

It is clear that Luka has a tortured past. Exactly what that past is, is only hinted at for much of the story. I think We Are All Found Things would work better for me on a re-read because I’d be able to relax and take in the scenery of the prose rather than be constantly wondering what the big secret about Luka was. My response was more about the way I read than the story. There were some beautiful lines in it and, the part after I understood what Luka and Rennie had been holding back was just gorgeous. Also, super hot.

Each story was easy to read in one sitting and each definitely had it’s charm. While the theme of the anthology was the notion that the clitoris had once been referred to as “the Devil’s doorbell” (why do I want to say “doorknob”??), I could have lived without each story specifically referencing it. That is very possibly unfair and more in the nature of a personal aside I guess.

We could be a medieval knight and his lady, stealing a moment out of time. We could be a Roman lord and his slave girl. I don’t like that particular adaptation, not today. We could be a Roman lady and her gladiator, because while circumstances have always conspired to lock down a woman’s sexuality, in every age and time there have been women capable of ringing their own damn doorbells.
The thought makes me giggle.
He tucks my hair behind my ear, and uses his thumb at the hinge of my jaw. “Are we amusing?” he asks.
“A little.” I explain my ridiculous thought process to him, because I am already naked and sitting on his cock. Maintaining dignity went winging into the hedgerows some time ago.
“Of course,” he says in his most thoughtful British schoolboy demeanor. “But it’s rather more fun to have someone else ring it for you. To your satisfaction.”

(from In the Garden, Anne Calhoun)