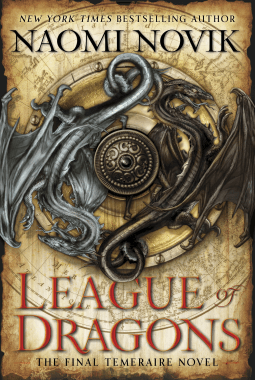 Napoleon’s invasion of Russia has been roundly thwarted. But even as Capt. William Laurence and the dragon Temeraire pursue the retreating enemy through an unforgiving winter, Napoleon is raising a new force, and he’ll soon have enough men and dragons to resume the offensive. While the emperor regroups, the allies have an opportunity to strike first and defeat him once and for all—if internal struggles and petty squabbles don’t tear them apart.

Aware of his weakened position, Napoleon has promised the dragons of every country—and the ferals, loyal only to themselves—vast new rights and powers if they fight under his banner. It is an offer eagerly embraced from Asia to Africa—and even by England, whose dragons have long rankled at their disrespectful treatment.

But Laurence and his faithful dragon soon discover that the wily Napoleon has one more gambit at the ready—one that that may win him the war, and the world.

I’ve been waiting – along with countless others – for this book, the last in the Temeraire series. When I got notification that I’d been approved for the netgalley arc, I did a happy dance. Yet at the same time, I was worried. Would I like it? Would it do justice to the series and characters? What if the finale to these (mostly) beloved books let me down? With fingers crossed, I plunged in.

The action begins during Napoleon’s retreat from Moscow during the brutal Russian winter. It’s a desperate flight, through hideous conditions as the Allies try to capture Napoleon before he can escape back to France, regroup and continue his dreams of European conquest. Needless to say, they fail and know they’re doomed to watch friends die and countries be destroyed. They also begin to realize that Napoleon’s grand plan might see them fighting the dragon populations of their own countries.

Having circled the globe and now approaching England from the East, a quick recap reminds us of what estranged Laurence from his family and caused him and Temeraire to be sent away. During a brief respite, Laurence and Temeraire are entangled in politics as they try to gain better conditions for the Russian dragons and attempt to learn the whereabouts of long ago captured Prussian dragons. Laurence and Hammond – still the weasely politician – are worried about gathering new allies and retaining the ones they have against Napoleon’s inevitable renewal of hostilities and furthering of his ambition.

Temeraire’s efforts bring the Allies an unexpected windfall but that comes with word that his implacable enemy – the death colored Celestial Lien – is seeking revenge on Temeraire which sends him and Laurence out in the face of overwhelming danger: from Russia to Prussia to France to England and back to the Continent for the finale. The action see-saws from bloody battles to the surreal black comedy of a duel which highlights Laurence’s unshakable sense of honor – which over the years we’ve seen get him into and out of trouble even as it has influenced Temeraire’s own behavior.

Iskierka can always be counted on to see the other side of the coin – she’s definitely a “glass half full” dragon and hell bent on getting that other half. When Temeraire is sulking in the depths of his gloom, she’s supremely confident, much to his annoyance. The interplay between these two is always funny. Napoleon is historically accurate but in this alternate reality of dragons, his visionary military genius turns to how best to use dragons not only in combat but also in trade. His visions are tempting to them and Temeraire has to use all his persuasion and debating skills to try and paint a true picture of what life under the Emperor’s Europe would actually mean for dragons. One of the nice bits of the book is seeing Temeraire’s leadership skills keep growing.

It’s also great to see past characters reappear, past events take on importance in this story, past alliances be revisited and Laurence’s honorable actions of the past be rewarded. Perscitia – now elected to Parliament – energetically debates with Temeraire again. The Tswanna who have little cause to trust European powers could tip the balance of the war. Laurence and Temeraire are still mistrusted and even despised by many in the Aerial Corps and who knows whom the feral dragons will cast their lot with. Then there’s a new character who is the despair of Whitehall and her parents with her modern views on eliminating all warfare. Laurence must use all his ingenuity to thwart the recalcitrant captains foisted on him by his own still pissed off Admiralty and he does so with the help of Rothchilds bank, the funds and shipping shares – really.

The end of the war and coming of peace are neatly done with all the blood, suffering and politicking of the real events. The alternate reality of the book is preserved with the Incan and Tswanna characters. I was slightly disappointed in one character who took less part and then departed in a fizzled out manner. There were also some potentially dramatic sections and scenes which had been set up only to have already taken place as the next chapter begins. Still there is peace at last, no major characters die, elements from the whole series are brought together, the dragons have made real gains in their fight for their rights and a potentially worth while future seems to be opening up for Temeraire. All in all, it’s a fitting and well done wrap up to a beloved series. B+