REVIEW: David Tung Can’t Have A Girlfriend Until He Gets Into An Ivy League College by Ed Lin

David Tung is a Chinese American high-school student in an upscale, Asian-majority, New Jersey suburb who works every day at his family’s restaurant and strategizes every homeroom about how to improve his class rank so he can get into an Ivy League college. His only release? Hanging with his “real” friends once a week at Chinese school in NYC’s working-class Chinatown. But when the pretty and popular Christina Tau asks him to a high school dance, David’s tightly regimented life gets thrown into a tailspin—especially since, as his mother likes to remind him, he’s not allowed to have a girlfriend!

Should he defy his mother and go to the dance? Or defy Christina’s wishes and spend Saturday night studying for the MCATs? And how is he going to explain all this to Betty Jung, the standout pupil from Chinese School whose opinion he can’t help but care about? Ed Lin’s YA-novel debut takes on coming-of-age in the Asian diaspora with a heartwarming and humorous exploration of race, class, young love, and the contradictory expectations of immigrant parents.

CW – underage drinking (not by hero), racism (both towards and from the Asian community)

Yeah it was the title (which reminded me of the extra long ones popular in the late 1960s/early 1970s) and the blurb which caught my interest. I really enjoyed learning about David, his never ending efforts snag that last 0.25 point in class grades, his immigrant parents who expect only the very best from him, his friends at his Chinese school in NYC, and the strong young woman who might be his girlfriend whether his parents approve or not.

David Tung is an ABC son of immigrant parents. They had to start a restaurant after his father lost his job during the 2008 recession. Some might think that David’s stated career goal – to become a physician – is a product of that upbringing and his parents’ pressure for him to achieve that regardless of what David wants. But David really does want it as shown by the fact that he focuses on MCAT questions even though he’s only about to finish his sophomore year in high school. David is that much into and ahead of the game. In his hyper-competitive school, all parents put this pressure on their children and despite the fact that Shark Beach High School has a reputation for its students getting accepted into Ivies, it’s only the best who do. Right now David is ranked eighth and is clawing for every percentage point he can in order to move up.

David might be as obsessed by grades as his peers but in other ways, he’s very different from them. His parents own their own business but it’s a restaurant in which they work hours a day, everyday while most of the other Chinese American parents in town have swanky NYC jobs in high finance or are doctors or lawyers. David starkly feels the wealth divide. Yet in his other life, at Chinatown Chinese school in NYC, he’s viewed as a rich suburban Chinese who is financially far ahead of most of his fellow (hard scrabble) students. He’s in both worlds and still not really in either world.

One thing is for sure. His mother won’t allow any hint of dating or a girlfriend so when David’s chief rival at school asks him out to a Dames Ball, he’s torn. He wants to go and schemes about how to raise the money to rent the quality of tux Christina Lau demands as well as how he’s going to get out of working at Tung’s Garden that night. Predictably, his mother hits the roof when she finds out, forcing David to renege on his “yes” and causing Christina’s friends to bully him at school. Then there’s Jean, with whom David rides the bus to school who is well on her way to being a mean girl; Al, the sole white guy at their bus stop; and David’s gang of friends at his Chinese school which is the only place where grades don’t count so he can relax and goof off. That is until they have to start working with Betty Jung – a take-no-prisoners, biracial girl who is also the best Mandarin speaker there. 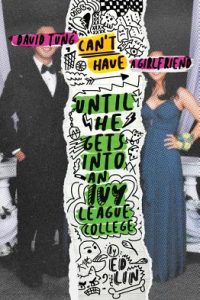 Will David get the summer internship he desperately wants? Will Christina’s friends finally leave him alone? Will his mom finally give him back his crappy cell phone? And is Betty the girlfriend David wants to have even though his mom won’t let him have a girlfriend until he gets into an Ivy League College?

We are deep in David’s day to day existence as the book starts. He’s got some stealth moves and secret tactics to help him squeeze every last bit of juice out of the grade grapes. It’s dog-eat-dog at his school and he’s going to go up in the standings whatever he has to (legally and ethically) do. I enjoyed settling into his head and watching him maneuver his way through a day. Since the book is actually more of a coming of age rather than a YA romance (though it does have a romance thread that begins about half way through the book) I didn’t mind the focus on him. The plot meanders a bit as David’s whole world is slowly introduced but as there are many things for me to learn about ABCs and FOBs, I found most of it interesting.

One thing is made clear – Asian Americans (and here specifically Chinese Americans and immigrant Chinese) are not a monolith Borg. Despite his parents being “Northern Chinese,” his mother made the decision to send David to a Chinese school that is predominantly Cantonese. As David freely admits that his spoken and written Mandarin isn’t as good as it should be, much less knowing any Cantonese, his mental translations of words not only makes sense but is helpful to readers who don’t know any Chinese languages.

David is the intersection between the Crazy Sorta Rich Asians and the hard working immigrants trying to establish themselves. Through his eyes, we get to see both populations. A few are only one note (bitchy Jean the Mean Girl) but most are more well rounded and show a variety of backgrounds and viewpoints. I might not have liked all of the characters but they felt real. For the most part, David just tries to keep his head down, works hard, and attempts to not make his mother mad. I do wish that there had been more background about his parents but since this is a first person POV, it could have seemed weird for David to know every detail about them.

The slow romance that develops is very low key but seems to be in keeping with what the Chinese community feels is appropriate and acceptable. David might chafe at some of the restrictions but he never thinks to go outside them. His mother might strictly lay down the law but there are also little moments that show she cares deeply for him and not just about how well he does.

David Tung has a wry sense of humor and a deep sense of honor. He’s hard working yet likes to goof off at times. He helps his friends, obeys his parents, and puts in effort to achieve what he already knows he wants. I actually wouldn’t mind reading about David 2.0 to see if he does get into an Ivy League College. Hint, hint. B

→ Jayne
Previous article: REVIEW: Their Christmas Baby Contract by Shannon Stacey
Next Post: REVIEW: Bones: Inside and Out by Roy A. Meals, MD