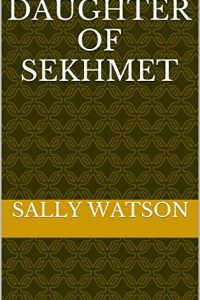 A paraquel to “The Next Pharaoh.”

General Horemheb is confident of becoming Pharaoh when Ay dies childless. Over-confident? He understands men. But not, alas, women, who are as unpredictable and disobedient as cats. The gods, possibly offended, challenge him with plots, pretenders, disappearances, assassins, magic, and willful women–not to mention an imperious kitten who rides his shoulder and whose goddess he had better not offend! Becoming the Next Pharaoh turns out more complicated than he had supposed!

Daughter of Sekhmet covers the same time frame as “The Next Pharaoh” with the same theme and central question, featuring virtually the same cast of characters – only shifting some major roles. All this with a brand new star! Mirith, nee Lilith, seizes the lead from her first nightmare on Page 1 – before Horemheb even arrived…. Sadly this is the last book in “The Ivory Cat” series. As I mentioned in my review of “The Next Pharaoh,” there were characters who seemed to vanish from that book after a chapter or two and now I know why.

Yes, as the blurb mentions, almost all the characters here were either in that book or the two that preceded it. Readers new to the series could start with either this book or “The Next Pharaoh” and probably follow along just fine. There are a lot of characters who might be hard to remember if neither of the first two books have been read but knowing exactly who the minor ones are isn’t really necessary and enough information is given about the ones who need to be known to figure out their importance in this story.

The focus of this book shifts and looks at the plot of “Pharaoh” from a different angle. Horemheb reluctantly saves a young Amurru woman who is angering the Habiru who keep her enslaved. She’s shown mage abilities and they don’t think a woman should do that. The Heretic Pharaoh Akenaten eliminated the use of mages and now, with the return of the old religion, the priests of the temples of Egypt are all desperately searching for replacements. When she predicts one too many things correctly, the Egyptian man who had trained Horemheb as a young boy neatly arranges things to his liking and Lilith is given to Horemheb who then hands her over to Piankh – which is exactly what he wanted all along.

A plan is hatched to secrete Lilith – or Mirith as she is now know since the Egyptians can’t pronounce the letter “L” – at a sepat where many of the former Royal Companions (mainly characters in the first two books) of Tutankhamun and Ankhesenamun now live. There Piankh will help train her to control her healing abilities – something that tests him to his last nerve. is a piece of work. She’s whip smart, soaks up knowledge like a sponge, is eager to learn anything and everything she can – as fast as she can – but her social graces are nil. An enslaved person for most of her life, she’s never had anyone who gave a damn about her and thus is suspicious of everyone for a long time until she begins to realize that these people mean her no harm and that she won’t have to fight and claw for a protector nor submit to sex (as she’s had to do in the past to ensure her place) if she doesn’t want it. The Egyptians are appalled when they realize what she’s had to face for so long. In Egypt they respect women and sex is consensual.

Her training isn’t easy though as Piankh is a tough nut himself and demands the best from her. This sometimes skews his approach to teaching her and it finally takes the combined wisdom of many people to work out how best to accept who she is and how she should be allowed to harness and use her abilities. This section of the book details a lot about Egyptian life and religion as Mirith knows nothing about any of it and her questing mind demands answers – detailed ones, thank you very much – to the intricacies of Egyptian religion that most people don’t even think about much less actually ask about. It keeps several characters on their toes, trying to stay ahead of her relentless questions. Mirith is rough and abrasive but I liked her determination to be in control of her life. Mirith takes no prisoners and has few fucks to give but when she does accept someone into her trust, it’s a lovely thing to see. As the plot moves towards its conclusion some of what is covered in “Next Pharaoh” is shown again but not in word-for-word exhaustive detail as we’re seeing it now from Mirith and a few others’ POV. The two bratty children who made me grit my teeth are hardly in this book (yay!) and there is less emphasis on Selket (Horemheb’s snarling, swearing kitten). Nefru (who might or might not actually be a goddess) is charmingly back along with a few of her offspring and (yes!) Sekhmet appears to help her chosen Mirith with healing. Don’t mess with a lion headed goddess.

All in all, I enjoyed my time with this interpretation of life in ancient Egypt. There’s enough that is known as well as spaces where things aren’t known, that four clever stories can be woven through the facts and sound realistic as well as respectful. Things that aren’t viewed the same now as then are not prettied up and sanitized for modern sensibilities, I’m glad to say, but neither are things sensationalized or lurid. Though this is mainly historical fiction, there is a calm, lovely romance in these last two books between Horemheb and his beloved Mutnodjmet (Nojet) the woman he waited for for years to marry. B