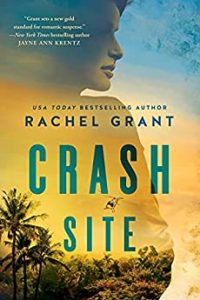 I recently listened to Dangerous Ground on audio and loved it so when I saw the second Fiona Carver book at NetGalley I was impatient to find out what was next. I read it almost straight away even though as I write this it’s October and the book isn’t out until January.

In Dangerous Ground, archaeologist Fiona Carver met wildlife photographer Dean Slater and they had a suspenseful adventure together. However, Dean carries so much baggage it was too soon for a HEA by the end of book 1. Would I get my HEA fix by the end of book 2 or would I need to wait even longer?  (No I’m not going to say here. I will say there is cause in Crash Site for readers to be more satisfied with the romantic arc than in Dangerous Ground but the details I will leave to the book itself.  There’s more story to tell – I’m not sure how many books are planned in this series, but it must surely be at least one more.

Whereas Dangerous Ground started off with loads of action and didn’t let up for almost the entire story, Crash Site has a slower start. In some respects it put me in mind of an Agatha Christie-type mystery (without the racism) – although I’m no expert on Christie, I admit. The cast is fairly large and there’s a fair bit of introduction necessary to set up the story.

Crash Site picks up nine months after Dangerous Ground. This time, rather than the Aleutian Islands and the cold, the action takes place on (fictional) Ruby Island in the Caribbean. The island is owned by Dominica but leased out on a long term to an American businessman who just happens to be a former field school buddy of Fiona’s.  Jude Reynolds is the CEO of Reynolds American Marine Freight (aka RAM Freight). He’s a billionaire with an interest in archaeology and Fiona. His lease to Ruby Island is about to expire and, keen to persuade Dominica to renew it, he hires her and a team to survey the island’s historical and cultural significance. There’s a star fort on the island and it was rumoured to have been a refuge for enslaved people who were fleeing captivity. There is also a rumour about sunken treasure. Jude also has ambition to start a streaming network, Wild Odysseys, and to that end, he has also hired a documentary crew to film the expedition.

The events in the Aleutians drew a lot of media attention and in an effort to make the documentary punchier, Jude’s machinations include bringing Dean Slater to the island to do a wildlife survey and photographs for National Geographic. The contract Fiona has signed allows to just about everything to be part of the documentary and bringing Dean and Fiona together again should help drive up ratings. Unfortunately, Jude had no idea that Fiona and Dean had feelings for one another – given his own interest in Fiona, this is perhaps the first place where his plans fall apart.

When Dean arrives, with the documentary film crew on the island via helicopter, it crashes and from there a series of unfortunate events occur – one is maybe an accident but two looks deliberate and before too long, things get very dicey for the people who remain on Ruby Island.

There were some plot points which felt a little shoe-horned in and a lot of lining up to do in order to get to the real action of the book which, for the most part, doesn’t really kick in until about the halfway mark. There are more episodic risks and tensions prior to that; it is not all introduction but I found the story less cohesive overall.

The major barrier between Dean and Fiona is that Dean is a widower who has vowed never to risk his heart again, the pain of losing his wife was too much and he refuses to face the potential of doing it again. Where that kind of fell down for me is that it’s clear as clear that Dean already loved Fiona (even if he hadn’t admitted it to himself yet) and that being the case, his devastation if something happened to her would be the same whether they were together or not. In my brain at least, it seems like not having a relationship but potentially feeling all the pain is not a good deal. If the risk is already there, why not enjoy the good stuff too? So the hemming and hawing about his feelings didn’t work as well for me because I was ready for Dean to get with the program even if he wasn’t!

I appreciated the mini-history of the African, Taino and Kalinago people who used Ruby Island as a refuge and liked as well that the cast had representatives from at least two of those groups within it. I also liked that Fiona herself was at pains to ensure that the stories of the native peoples were told by themselves. She sought to boost their voices rather than speak over them. Her place in the project was explained in the book and made sense but she consistently wanted to highlight local experts and those who shared their heritage with the island region. Where there is significant historical detail it is largely told by indigenous people. (There’s an author’s note at the end directing readers to a site, built by indigenous people, which provides more information for interested readers as well.)

The back half of Crash Site is action-packed and I enjoyed it more – there were other reasons for this enjoyment too but I won’t give away spoilers here.  It’s not quite as tightly plotted as the first Fiona Carver book but it was nonetheless an entertaining, tense read.

Crash Site is (at least currently) only available from Amazon.