I know that when I start a Carla Kelly book, I’ll get a certain number of things. An honorable hero, an unflappable heroine, some idiot secondary characters who may bluster and threaten to cause the hero and heroine some problems but who usually are mainly all hot air and dismissed as the pompous stuffed shirts they are and a gentle love story of two people finding each other – often where they least expected. As this is a linked anthology, here I get this in triplicate which makes sense since all three stories involve the military and we know how much the military, the world over and throughout time, loves its paperwork. 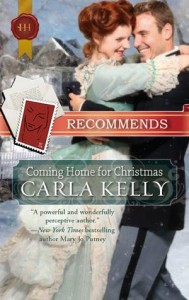 1812 Alta California and stranded Navy surgeon Thomas Wilkie wishes he were home in Scotland rather than in the Spanish held San Diego. Here by the fortunes of war and left here as a bargaining chip when his remaining shipmates finally head north to where they hope to eventually find passage home to England via the Americans in Oregon, he tends the people of the Presideo and surrounding area since he’s the only medical man between there and Tucson. When lovely Laura Maria Ortize de la Garza finds herself ostracized due to her father’s embezzling, Thomas also finds himself in the unlikely position of savior and new husband. Can this unlikely pair discover lasting love from such a beginning?

In 1855 Crimea, widowed Lillian Wilkie Nicholls trusted what she was told – namely that this war would be over in 6 weeks. Two years later she’s still Doing Good in a hospital in Anatolia as she and wards full of wounded soldiers await their return to England. With her is American military observer Major Trey Wharton who has somehow ended up as the administrator of the hospital and who, along with Lily, doesn’t suffer fools or nitwit English surgeons gladly. Their year long friendship will be ending soon – as quickly as the wheels can turn in a military environment. Or will they find the courage to speak up before it’s too late?

1877 Fort Laramie finds Army surgeon Wilkie Nicholls Wharton far from his parents in Philadelphia but finally headed home for Christmas and his long delayed marriage to a fellow Main Line Philadelphian. His hopes for a quiet journey are dashed when he’s asked to keep an eye on lovely Frannie Coughlin who’s also headed East and then has to take responsibility for transporting Nora Powell home from her 13 years of Indian captivity to whatever relatives she still has left in Iowa. Then, just as he thinks he might still get some of his medical journals read, yet another female joins them on the train and precipitates Wilkie and Frannie’s discovery of what they really want this Christmas season.

Paying homage to Garrison Keillor’s Lake Wobegone denizens, in your novels the women are strong, the men are honorable, and the children are usually cute without being annoying. The “villains” are generally just thickheads and idiots who might have a higher rank but who are usually dismissible from the main action by the hero and heroine who are as incapable of intentionally hurting anyone as they are unable to turn their backs on anyone in need. It’s more fantasy than reality but it’s a lovely fantasy to sit down to and drift into for a while as I forget just how awful the latest blaring news headline is. These are people as I would love us all to be.

I enjoyed the way the stories are varied in time and location with a mix of ages, nationalities and – let’s hear it for – experience. Lily Nicholls, who misses the comforts of marriage, and Frannie Coughlin, who earlier anticipated a marriage that never happened, are frank about their wants which delights their heroes no end. One thing I wish had been expanded was the substory of the young woman being returned to white society despite her wishes. There could be a whole book in this. The delightfully devious Sultan was a fun character and Father Hilario an example of pure compassion.

When I finish reading one of your books, I might feel as if I’d had one too many pieces of sugar sweet sheet cake but I also feel happy. These are people I’d like to meet in real life – real salt of the earth sorts.The time just flew while I read about them. And thank you so much for picking varied backgrounds for the characters and locations in which to set your stories here. I still enjoy reading Regency set anthologies but something different every now and then is a real treat. B for each novella.