REVIEW: All Stirred Up: A Novel by Brianne Moore 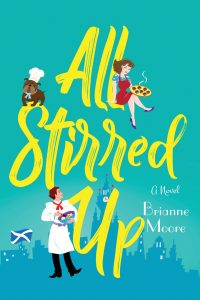 Inspired by Jane Austen’s Persuasion. She returned to save her family’s dying legacy–but found the ghosts of her past alive and well.

Susan Napier’s family once lived on the success of the high-end restaurants founded by her late grandfather. But bad luck and worse management has brought the business to the edge of financial ruin. Now it’s up to Susan to save the last remaining restaurant: Elliot’s, the flagship in Edinburgh.

But what awaits Susan in the charming city of Auld Reekie is more than she bargained for. Chris Baker, her grandfather’s former protégé–and her ex-boyfriend–is also heading to the Scottish capital. After finding fame in New York as a chef and judge of a popular TV cooking competition, Chris is returning to his native Scotland to open his own restaurant. Although the storms have cleared after their intense and rocky breakup, Susan and Chris are re-drawn into each other’s orbit–and their simmering attraction inevitably boils over.

As Chris’s restaurant opens to great acclaim and Susan tries to haul Elliot’s back from the brink, the future brims with new promise. But darkness looms as they find themselves in the crosshairs of a gossip blogger eager for a juicy story–and willing to do anything to get it. Can Susan and Chris reclaim their lost love, or will the tangled past ruin their last hope for happiness?

The cover of this book caught my attention but the story itself isn’t as rom-comic as the image would lead you to believe. Instead it’s an updated take on “Persuasion” that, for a long time, reads more like a fiction novel then a romance novel. But I liked the somewhat slower pace, the banked yet simmering feelings between Chris and Susan, and the time spent on the elements and people of their lives who brought them together, tore them apart, and now help offer a second chance.

I must confess that though I like the plot of “Persuasion,” I’ve never read the book (::ducks head::). Instead my knowledge of how well “All Stirred Up” compares to it is based on the two adaptation versions I’ve seen. Not ideal, I know, but there it is. Still I think the book does a good job at keeping the important characteristics and relationships of the people in the novel while maintaining a believable up-dated setting. Some minor characters are cut (Mrs. Clay, Admiral Croft, and one of the Musgrove sisters) There are a lot of descriptions of Edinburgh which helped me imagine the city most of the story took place in but readers’ tolerance for this will vary. There are also TRIGGER WARNINGS a character who died of cancer, past drug use mentioned, revenge porn, kitchen misogyny, and the mention of violent death of a character’s friend.

In “All Stirred Up,” the closed world of high end restaurants takes the place of the Regency ton. The portrayal of the back of house kitchens of Susan’s family’s remaining restaurant and Chris’s new one sound realistic. There is hard work, hierarchy, late nights drinking in pubs, more than a touch (initially) of misogyny (which Susan soon roots out) at the Napier restaurant, along with dedicated chefs inventing new recipes and re-imagining classics. I enjoyed the way that references were made to how GBBS has ignited public knowledge of bread (work the gluten!), puff pastry, choux pastry, and how to make creme brulee at home. Chefs and pastry chefs can’t be lazy and rest on their laurels or tried and true dishes any more.

Whether or not “middle child syndrome” is actually a thing, that’s how Susan’s character is written. She is not the privileged elder sister her father adores nor the youngest sister whose fears and meltdowns are indulged. Instead she is the peacemaker who is called on to soothe hurt feelings and reign in expenses as she tries to save and deal with the tattered remains of the family legacy. The loss of the family patriarch and the sisters’ mother in quick succession hit the sisters hard yet differently. Julia’s burgeoning career in design was cut short, hypochondriac Meg is terrified of every little hurt and ailment fearing them to be signs of mortal illnesses, and Susan’s collapse into grief helped to ruin her romantic relationship. I like that their beloved aunt gets two of the sisters quickly into counseling and ultimately the third utilizes this as well.

Susan appears to have a bit more power and agency than Anne Wentworth did. After a visit to the only remaining location of the once esteemed restaurant empire, she uses her degree and knowledge to begin to deal with the lazy and toxic environment that has been allowed to fester there. She might have to inwardly brace herself in a confrontation but she pulls it off and takes charge. In the face of massive doubt and public dismissals, she works hard to save this place her beloved grandfather started. Eldest sister Julia plays a bigger role too as Susan calls on her to redecorate “Elliots,” while Meg is more true to the role of the overwhelmed mom with marital problems.

Born and raised in the poor section of Edinburgh, Chris has fought his way up the ladder to reach some degree of international stardom via a TV cooking show. He is given a resemblance to Sam Heughan (because phroar) but this is tongue-in-cheek in the book as it is played up as intentional on the part of the show producers to capitalize on Heughan’s well known phroarness. But unlike the genteel sister of the book, Chris’s plain spoken sister Beth lays it on the line and has given me a fantastic new swear description for when someone pisses me off.

The reasons behind the orchestrated break up of Chris and Susan’s relationship are updated but relevant. There are hints of what caused the ringleader to act but thankfully the details are saved for a high impact scene late in the book. This person also apologizes to Chris before Susan learns of what happened which made it more meaningful. The things are not just piddly misunderstandings but rather are biting issues that would lead someone who cares to take action to protect one they love. And perhaps this person is correct that the time wasn’t right and the ten year interval has given Susan and Chris time to mature.

Susan’s apology is justified and needed but Chris also acted on some long held and tightly clutched misconceptions. I like that he changes these based on what he sees Susan do and how she acts – which takes some time. Their misunderstandings are based on things others (who Susan trusted) did and painful situations that they as twenty year olds weren’t quite ready to deal with. The story gives each time to reevaluate their feelings and see the other as they are now. I love how the final scene of “Persuasion” is played out here but I won’t spoil it. B