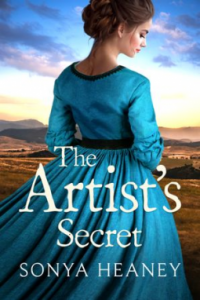 Despite their growing attraction, both Peter and Elizabeth have secrets that will come between them.

Peter Rowe’s life is in the city, but his soul is in Australia’s southern tablelands – a place he’s never seen. Taking the new land manager’s position on the thriving estate of Endmoor is the chance he needs to discover what happened to the family he has never met. What he doesn’t expect to find in the bush is his employer’s talented, beautiful sister.

Elizabeth Farrer’s world is changing rapidly. An artist whose work has begun to gain acclaim, her brother’s marriage has made her redundant in her own home and she intends to leave the country and make a life of her own. Her plans would take her far from her beloved New South Wales, but with the arrival of Endmoor’s newest employee – a man unlike any other she has met – she discovers there might just be a reason to stay right where she is.

Just as they conquer their most difficult obstacles, old prejudices rise up and threaten to keep them apart …

Elizabeth Farrer was introduced in the first book of the Brindabella Secrets series and I wanted to see what would happen to her next. Unlike some nasty romance sisters-in-law, Elizabeth warmly welcomed Alice into the family when Alice had to marry Robert Farrer to tamp down rumors about her staying at Endmoor – the Farrer family homestead. I thought if there was ever a character who deserved her own story, it’s Elizabeth.

“The Artist’s Secret” picks up two years after the first book but, I thought, stands alone well. There’s just enough backstory to fill in newcomers without going overboard. As with the earlier book, there’s lots of detail about NSW bush country though thankfully all we see of the fauna are kangaroos, a skink, some noisy birds, and the imported merino sheep. Elizabeth knows to stomp through the bush to scare off snakes and cheerfully tells new employee, and Sydney native, Peter about the spiders as big as her hand – complete with a demonstration. Alice loathes spiders as well, as it was probably one that bit her years ago. Alice is hell-on-wheels against spiders.

It’s soon obvious that Peter has been sent to do this job by his father in order to discover something. What this is isn’t clear but it sends Peter across the Farrer land looking for a specific place. Peter and Elizabeth have several run-ins in which Elizabeth manages to (slightly) embarrass herself but other than that, she’s shown as a competent young woman with artistic talent that is finally getting her noticed. Several of her paintings have been sold by an agent and she’s considering moving back to England for more training. What “secret” she has, I never discovered.

Then Australia decides to try and drown the area in an end-of-days rainstorm that calls out all hands in an attempt to keep the town from floating away. Thrown together, Elizabeth and Peter finally admit to their feelings (which they’d kept to themselves though Alice sussed it out).

Peter is nice, Elizabeth is nice, most of their neighbors are nice, Robert and Alice and their new baby are nice. The first third of the story meanders about with seeming episodic scenes that abruptly cut off after a clue is gently tossed out. I had to work to keep my interest engaged as it didn’t appear to have much of a plot.

Hints were dropped about Peter’s ethnicity but it took a while to flesh this out. He has always found the anonymity of larger Sydney easier to live in but gets some stares where he is now. There is one scene in which Peter bristles at a collection of things that stand for how Whitefellers have taken over Australia and Aboriginal land. It isn’t until the Biblical flood that any major degree of racial nastiness against Peter pops up. This opens the door for Elizabeth to apologize for her earlier statements and attitude and for Peter to discuss his family’s past.

Peter tells Elizabeth that his mixed-race mother was raised to be ashamed of her heritage and that, growing up, all discussion of her past was firmly forbidden. Peter has an encounter with an Aboriginal man in town and, somewhat shamefacedly,  confesses that he doesn’t understand when the man speaks in an Aboriginal language. As the book ends though, he’s still searching for information and the townsfolk appear to have accepted him as well as his marriage to Elizabeth. Meanwhile their union got a boosted thumbs up from Robert due to his own misalliance with Alice.

I enjoyed learning more about Australian past and imagining the Brindabella Range but must admit that the early part of the book was hard to stay interested in. It ends with unanswered questions about Peter’s people lingering as well as a conversation that Elizabeth and Robert were supposed to have about an earlier fiance from her past. But at least Alice is still indomitable. Seriously to not mess with that woman. C

→ Jayne
Previous article: REVIEW: The Country Escape by Jane Lovering
Next Post: REVIEW: All Stirred Up: A Novel by Brianne Moore