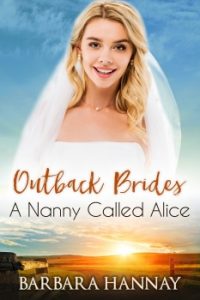 When Alice Trembath is mugged in the stark Australian outback, she has two choices: return to the US with an “I told you so” from her conservative parents and join the family business, or take a job as a nanny on a nearby cattle station. Despite being wildly unqualified, she accepts the position. She’s a fast learner and besides, she needs the money.

Hotshot businessman Tom Braydon is juggling huge responsibilities. After the death of his brother, Tom took in his orphaned nieces and managed his brother’s cattle station, while simultaneously running his own thriving business in Sydney. Tom desperately needs Alice’s help, even though she has zero experience looking after children or living in the outback. He has plenty on his plate, he doesn’t need the distraction of a romance.

But while Alice and Tom strive to ignore the chemistry sizzling between them and focus on their separate goals, love clearly has other plans.

Years ago I read one of your Harlequin books and totally flubbed up the lingo I used in my review to describe it. You graciously overlooked that and I ended up learning more Aussie slang. As with many authors, I’ve been meaning to read more of your stories so when I saw this book was part of the Outback Brides Return to Wirralong series, I jumped all over it.

Poor Alice doesn’t have the best introduction to Australia but as she muses later, it could have gone a lot worse and all she lost were things. True, tangling with the insurance company over her stolen, burned out car, her bank over her stolen credit cards, and getting her stolen passport replaced was probably about as much fun as having a redback spider sit down beside her but she triumphs. Kudos that Alice didn’t act stupidly to get herself into that situation and that she was wary when, later, a handsome man stops to help her. Still if Tom’s young nieces hadn’t been there, Alice would probably still have insisted on hiking into the nearest town. Once there, the medical clinic checks her out and the local police officer and his wife help get her some basics. Ah, there are the friendly Aussies we’ve all heard of.

) even comes up with an idea for how Alice can earn some money and have a place to stay while waiting for all her lost stuff to be dealt with. Now here is where modern readers just have to go with the idea of a man hiring a basically unknown woman to come live in his house and be a nanny for his two orphaned nieces. I went with it and did fine.

Luckily for Alice, Tom is up past his eyeballs in trying to run the family cattle station as well as keep up his Sydney business plus look after Freda and Ivy who have their youthful tantrums and moments of intransigence. They do have reason as they’re still dealing with the grief of losing their parents and the last nanny who thought Tom had asked her there in order to propose to her. I felt the girls were written believably and this is said as someone who doesn’t like either plot moppets nor sugary sweet angels.

The attraction between Tom and Alice is fairly quick but yay that they don’t immediately give into it. They are both worried about how the girls would react plus Alice has always said that this is temporary until she can be on her way to discover the beauty of Australia. She wants to spread her wings and see the world. Even after they enjoy a night or two of sizzling sex, the plan is still that Alice will eventually be leaving. Only thing is that her weeks with Tom and the girls have made Tom realize that he’s found his One.

As the book was winding down, I was worried that Alice would end up forgoing her dream of seeing more of Australia and, as she was worried, continue to settle in one place just for convenience and, yes, love. I enjoyed the way this was ultimately handled. Time for her to think is added to the rather short time they had together so that when Alice admits that she’s found what she wants (booyah to her parents!), I’m ready to believe that this across the hemispheres and fairly quick romance is real. The parts of the story dealing with the girls being ready for this change in their lives is appreciated as well. And now Alice knows that crocodiles aren’t in Victoria! B

It was only then, as Tom turned and joined the girls who were racing towards the water, that Alice remembered about crocodiles. Oh, God! Terror ripped through her. How could she have stood here, stupidly blushing about bikinis, when the whole world knew about the crocodiles in outback Australia?
Instantly, she was swamped by horrific visions of Freda and Ivy being snapped into pieces by massive, prehistoric jaws.

‘Tom!’ she screamed, frightening a flock of birds in a nearby tree. ‘Wait!’

He was already at the water’s edge, but he turned back to her, thank God. But now Alice faced a new dilemma. She couldn’t call out about crocodiles without frightening the girls.

‘You okay?’ Tom called back.

‘But what about—’ Alice tried to mouth the word, ‘croc-o-diles?’

To her annoyance, Tom merely looked impatient. ‘Excuse me? What’s your problem?’

She stepped closer. ‘Crocodiles,’ she whispered.

Now, to her chagrin, Tom laughed at her. ‘Crocodiles? Hell, no. We’re in Victoria, Alice. No big lizards here. They’re only in the tropics, in the north of Australia.’