Kathleen Gilles Seidel was once one of my favorite romance authors. After a long hiatus, she returned to the romance genre last year with Stand Tall, a trilogy about three Olympic snowboarders who are friends. I liked the first book in the series, The Fourth Summer, not so much for the romance (it was understated), but more for the heroine and for the milieu and conflict—the hero and heroine were serving on a sequestered jury and sequestration was getting to everyone on the jury. The negotiation of the interpersonal conflict within the jury held my interest. 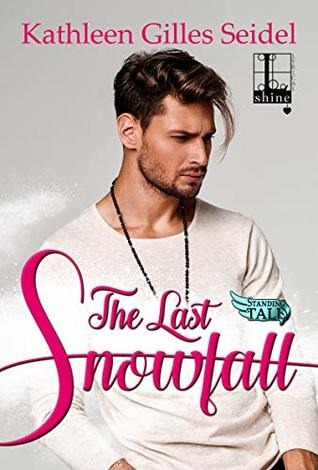 Still, I did not rush to read book two, The Last Snowfall, which suggests that I may have graded the first book in the series more highly than I should have. Late last year I did eventually get to The Last Snowfall but the opening of the book was slow and boring, and I put it down. I tried again more recently and this time forced myself to push through the slow beginning. Eventually the book engaged me.

Retired snowboarder Nate Forrest comes to back to his hometown in West Virginia (also named Forrest; his family members were prominent figures in the town until they moved away) to visit an old friend. The town is struggling; it’s a mining town and many businesses have been abandoned now that the mine is closed.

Nate’s friend, Pete, is managing some aspects of the construction of a new and shiny hotel (I never totally bought into the concept that a big, fancy hotel would be built in a run-down town no matter how scenic its surroundings, but interestingly, it’s the second book with this premise that I’ve read this year). Pete’s wife, Cheri, is holding down the fort, or rather, a hardware store the couple owns a town away. On the way there, Nate and Pete are stranded in a snowstorm but they manage to reach the house of the town’s vet and shelter there.

Lacey Berryville, the vet, has only lived in Forrest for a few years. Lacey graduated from vet school with debt but her student loans are about to be forgiven in return for her work in Forrest, a veterinarian shortage area, for three years. She is now in the third year and planning on leaving soon. Lacey has worked hard for everything she has and will miss the people (and animals) in Forrest if she leaves, but she can’t afford to buy the clinic where she works and the vet who runs it plans to sell.

Nate picks up on some tension on Pete’s part despite Lacey’s welcome, and he realizes that though faithful to his wife, Pete has a crush on Lacey that he feels guilty about. Thus, when (after Pete has left) Nate and Lacey indulge in a one night stand, both decide that Pete shouldn’t find out.

This seemed like it was going to be the novel’s main conflict but happily it’s not. Nate quickly decides he wants a committed relationship with Lacey, but she’s wary. Nate socked away a lot of money when he was competing but now he’s rudderless. His lack of direction worries Lacey. This plot concept was fresh but not very compelling.

The setting is relatively unusual; I haven’t read many books set in West Virginia coal country before.

Nate was more mature than Seth, the hero of The Fourth Summer, but he still had some growing pains and this was not a great characteristic. Lacey was pretty cool and in some ways more mature. One thing I appreciate about Seidel’s books is how competent the heroines are at their jobs and I enjoyed that here.

Another thing I enjoyed was the way two ancillary themes were developed: class differences and the differences in Nate and Lacey’s families. Nate comes from an upper middle-class family where education and stability are valued (his mother was a schoolteacher and his father was the principal). In contrast, Lacey’s family is poorer. Her parents were a makeup artist and a photographer, both of whom wanted to break into the jobs of movie star and famous artist. After they divorced, Lacey’s mom became a yoga instructor and Lacey, her mother and her brother moved around because her narcissistic mother “couldn’t seem to find a studio that appreciated her.”

Her family’s dysfunction and the constant moving around made it difficult for Lacey to trust that anything good would last. Conversely, Nate was intrepid. His parents were loving and supported his dream of winning a medal in the Olympics. The book’s underlying message was one of “Don’t let fear hold you back.”

Despite being part of a series, the book was standalone; we saw very little of the characters from the previous and upcoming novels in the series and you don’t have to read the earlier books to understand the events and characters in this one.

I wanted more chemistry between Lacey and Nate. There book was not particularly steamy but had more sex than Seidel’s books usually contain. Even so, the relationship lacked spark. I needed to feel the attraction more. I understood what Nate saw in Lacey but I wanted a stronger grasp on what (other than Nate’s money and status, which she didn’t seem to care about) Lacey could get out of a relationship with him.

The book could have used more liveliness as well. It was a struggle to get into; the beginning was sloooooow, and even once the pace picked up, the book felt a little unemotional. After I got past the first quarter, the book did get more absorbing. It is narrated in omniscient voice, an unusual choice these days and one that lends itself to infodumps. Here there were too many.

Seidel’s novels generally include a lot of description but here it really was too much. I couldn’t help but think about how much better the book would be if some of the description had been trimmed. The same wordcount could have been used to develop the characters more or complicate the plot further. A lot of description is not always something I mind, and I’ve sometimes liked it in Seidel’s books, but in this case it was too much.

Other than the excess description, the prose was okay, except for the rare but irritating use of slang like “That’s really wack.” I don’t usually mind slang in contemporary romances but it sounded off here, probably because most of the writing was in a different vein and included more formal and old-fashioned expressions. Additionally, I was unfamiliar with the term “wack” and even after looking it up in the Urban Dictionary I’m confused about which definition of the word was being used here.

There was also a lot of information about and focus on dogs, which is great if you’re a dog person. I’m not, so it got to be too much for me after a while. It wasn’t quite as bad as in the Linda Howard book with the Mary Sue dog but it was still too much.

One thing I like about Seidel’s novels is that the characters have to problem solve complicated interpersonal issues not just within their relationship or their families but also with coworkers, friends and acquaintances. That’s an aspect of her writing that I have often enjoyed in the past because it’s usually presented with depth and nuance. It was enjoyable here too. Still, a scene that came very late in the book marred that for me.

All in all, this was a dry read that did not live up to the promise of Seidel’s earlier books. C-.