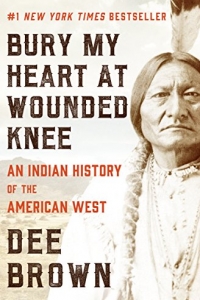 Bury My Heart at Wounded Knee by Dee Brown

When this book was published in 1970, it was hailed as one of the first books to chronicle the destruction of the American Indian tribes in the midwest and western United State solely from the American Indian perspective. As such, it’s undoubtedly an important and worthy historical document. Speaking simply as a reader, it didn’t work that well for me. The writing was dry and repetitive. I feel somewhat callous for saying that, because part of the reason it’s repetitive, of course, is that the nature of the genocide perpetrated on the native peoples was repetitive. Massacres, promises, betrayal, reservations, death. Over and over.

I think the book would’ve worked much better for me if there were more “color” – more biographical and contextual details to give me a sense of who the people were. As it was, I had a lot of trouble keeping the various historical figures straight – even ones whose names are familiar to me. Readers who come to the story with more knowledge about the various tribes and their leaders probably would have found it much easier and perhaps more rewarding reading. I’m not sure how to grade this – I’ll admit I probably skimmed at times because it just wasn’t holding my attention. A grade of C seems fair. This is the second book in the Ravenels series, after Cold-Hearted Rake. The burgeoning romance between Helen Ravenel and Rhys Winterborne was prominently featured in the first book, at times overshadowing that book’s central romance (at least for me). The plot of this one unraveled a bit differently than I was expecting. I was anticipating a continuation of the internal conflict where Rhys feels not good enough for Helen and Helen feels shy of Rhys because of her natural reserve and because she’s been so sheltered (which then leads him to think she has a disgust of him). While I was interested in that dynamic, I wasn’t disappointed to be surprised by the different direction the book actually went in. The only caveat I’d offer is that the actual conflict proves to be more external, which isn’t necessarily my favorite thing. There are still misunderstandings (and eventually, a big secret) between Helen and Rhys, but even those manage to be brushed aside with surprising ease. Still, I found both the hero and the heroine engaging, and the various other characters who will be featured in upcoming books are all appealing enough to keep me interested in the series. My grade for this was a B (a slightly higher B than the one I gave to Cold-Hearted Rake). 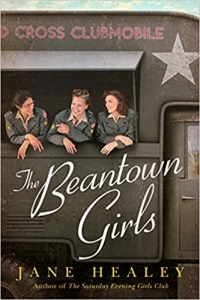 The Beantown Girls by Jane Healey

I was intrigued enough by the description of this book (three young friends from Boston become Donut Dollies in Europe during World War II) to request a sample from Amazon. I don’t do that often, and even though the sample didn’t wow me, I was still interested enough by the premise to order the book (also, it was free). The narrator, Fiona, is motivated to go to Europe to try to find her fiance, who is MIA. (This doesn’t seem like a great plan, and indeed Fiona doesn’t do much other than ask some people she meets if they can get information on the missing man.) Her friends, vivacious Viv and shy Dottie, come along for the ride, so to speak. There’s humor (the girls try to learn how to operate the donut maker), tragedy (they befriend soldiers who are later killed) and romance (everyone couples up by the end). The book *could* have worked for me, but the prose and characterization felt really juvenile and honestly kind of dull. I had to check to make sure the book wasn’t a YA (not that YA hasn’t grown in sophistication by leaps and bounds over the past couple of decades; it felt like a YA written before 1980). None of the characters came alive enough for me to care much about them, and the dialogue was stilted and awkward. I’m giving this a C solely based on the setting, which did continue to interest me in the course of the book even though the execution didn’t work for me. 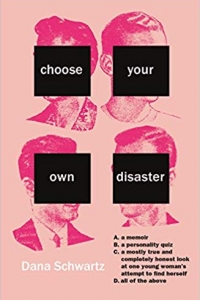 Choose Your Own Disaster by Dana Schwartz

This is billed as a “long-form personality quiz” because of the conceit the author uses of inserting pop quizzes that prompt you to “turn here” based on your answer. I didn’t actually follow along that way, but just read the book in order. Maybe it would’ve been easier with a physical copy, but I was daunted by the jumping forward and flipping back for fear of missing something in my electronic version.

Schwartz is a popular Twitterer (Twitterati?), known for @GuyinYourMFA and @DystopianYA, as well as her own account. I wanted something lighter in the non-fiction realm after the heavy Bury My Heart at Wounded Knee, so I picked up this memoir. She’s an engaging writer, but it wasn’t exactly a light read. It’s written in second person present tense, which I suppose is a nod to the “choose your own disaster” theme. It blunted the effect of some of the subjects she writes about, which I think was actually a good thing for me.

Not that the book is full of tragedy – Schwartz grew up upper-middle class outside of Chicago and went to Brown before interning for the Stephen Colbert Show. But along the way, she dealt with an eating disorder, insecurity and self-loathing, as well as dysfunctional relationships (reading her account of being That Girl – the one who chases a guy who clearly has no interest – is very cringe-inducing).

I liked Choose Your Own Disaster quite a bit, even when there were elements I couldn’t relate to. I’m probably closer to her parents’ ages than Schwartz’s, and it was jarring to me at times to read a memoir in which the narrator is in college in 2013. It seems so recent to me! Still, I was very engaged in the story, and it retains an element of mystery because you don’t really know in some instances whether A) or B) was the path she actually took, and sometimes it makes quite a difference (as when she considers cheating on a boyfriend who she actually loves). My grade for this was a B+. 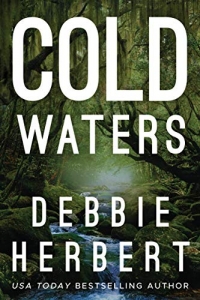 This was an Amazon freebie and I’m glad I didn’t pay for it. Violet returns to her small town of Normal, Alabama where her elderly father and older sister reside in a crumbling family mansion. She’s been gone for 10 years, institutionalized after the mysterious disappearance of her best friend Ainsley. Violet and Ainsley went skinnydipping one night when Violet was 15; Ainsley was never seen again and Violet emerged from the woods naked and confused, suffering from memory loss. I wasn’t quite clear how she ended up in a mental facility and then a halfway house for so long, since Violet was never charged with any crime, much less convicted of one. Anyway, it’s the usual “buried secrets won’t stay buried” small-town melodrama, which would be fine if it was well-done. But thin and inconsistent characterization, mediocre prose and a villain who is practically waving his/her arms and jumping up and down screaming, “It’s me! I did it!” meant I was tired of this book long before it actually ended. My grade is a D.