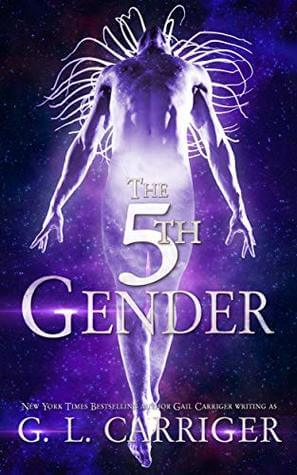 A species that has no word for murder, has a murderer aboard their spaceship.

Tristol lives in exile. But he’s built a life for himself aboard a human space station. He’s even begun to understand the complex nuances of human courting rituals.

Detective Hastion is finally flirting back!

Except that Tristol’s beloved space station is unexpectedly contacted by the galoi – a xenophobic species with five genders, purple skin, and serious attitude. They need the help of a human detective because there’s a murderer aboard their spaceship. Murder is so rare, the galoi don’t even have a word for it.

Which means that he and Detective Hastion are on the case… together.

Contains men who love other men in graphic detail, regardless of gender, biology, or skin color… and lots of emotively sexy tentacle hair.

A friend recommended this book to me and it sounded so good, just my cup of tea. I also knew that the author is an experienced writer, whose writing style I liked in the past, so the good writing at least was almost a guarantee. And that part was very true – the book was technically better written than many MANY m/m books that I have read before. The main character Tris was also very entertaining. As the blurb tells you he is in self imposed exile from his planet; learning human rituals and traditions, finding some similarities and a lot of differences – it was very amusing.

Alas, story also promised mystery and romance and I did not particularly care how either of those plot lines was executed.

Supposedly Drey and Tris interacted before since they both lived and worked on the same human station. Tris is attracted to Drey but thinks that Drey does not want anything to do with him and pretty much vice versa. All of this happened off page, so when our heroes start interacting closely, it does not feel like we are experiencing relationship in the making. It feels like a very VERY Insta love, because as I said we are supposed to take the author on her word that they would have liked to get together but because of misunderstanding each other’s intentions they did not yet.

The guys are starting to get closer when Tris is house sitting ( when I say house sitting I mean at the living quarters of the station) for the human couple who became his friends and asked Tris to watch their cat. The cat escapes and Drey helps Tris to capture cat and bring him back to the house.

“They made it back to residential quarters. Eventually. Mr Zyga had left the door open. Drey shook his head, grateful that particular kind of security wasn’t much of an issue on this station. Still, perhaps he should remind the galoi about safety precautions. “This your place?” he couldn’t help but ask. The galoi’s hair flattened. Drey had no idea what that meant but he suspected embarrassment.

“Oh no, detective! It is nice though, is it not?” Genuine curiosity was in his voice. Drey shrugged. He wasn’t much interested in interior design. One set of standard quarters looked pretty much like another to him. “It’s fine.” Tris nodded earnestly. “It belongs to *humans* female-male* heterosexual-spouses* friends* Elle and Olav.” Tristol did that sometimes, mashed together the identification of person plus species and gender. It was endearing and clearly some remnant from his native language. Drey wondered how Tris might talk about or introduce Drey to others: *acquaintance* male* single* grumpy* perhaps?”

Tris was wonderful – funny and kind and genuinely wanting to be friendly with all of his human friends and acquaintances and hilarious when he learned human customs and apparently really wanting Drey to “keep” him. Drey was tall, dark and grumpy I guess? Seriously he was not a bad character either, but if there ever was a book where Insta!Love did not work for me this was it. I have no idea why the guys ( Tris is outwardly male, so I will keep calling him that) initially wanted each other, but they both seemed very happy when they got together. Okay I guess?

Mystery was beyond disappointing. I think it was just there for Tris’ character development, but I wanted actual investigation of the murder and certainly there was pretence of that, but it went like – evidence found, boom, here is the answer.

Also, I don’t mind when science fiction setting is just used as a window dressing for good romance/mystery, but since I was already unhappy with the substance of both storylines, I could not help but look for a good world building and it was so very paper thin.