I’ve been doing quarterly “what I’ve been reading” posts pretty faithfully for a while now. Usually I have close to ten books on the list, but for various reasons I haven’t been reading much, and so I only have three to review (I also reviewed two books with Janine – How High We Go in the Dark and Sea of Tranquility). 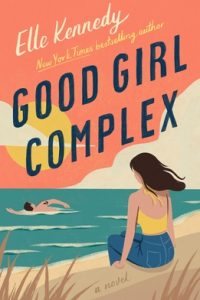 Kaetrin reviewed this back at the beginning of February and gave it a B-. I liked it a bit better; I mentioned in the comments on her review that it was a B verging on a B+ for me, but I recorded a B+ in my book log, so a B+ it is.

When I saw that Kennedy had a new series, I somehow got the impression that it was more women’s fiction-y than her previous work. I was happy enough to find out that it’s similar to the other books of hers that I’ve read – a New Adult romance set in a college town.

I didn’t have a huge problem with the set-up, in which townie Cooper tries to seduce rich girl Mackenzie to get revenge on her boyfriend, who got him fired from his bartending gig. I felt that it was handled with a light enough touch; Mackenzie wasn’t some vulnerable poor little rich girl, and Cooper wasn’t a moustache-twirling villain about it. Soon enough his feelings are real and then it’s just waiting for him to get his comeuppance when Mackenzie finds out the truth. Honestly, I felt like Kennedy left it for too late and by the time it happened I kind of wish she had chosen a different, more subversive route to resolve the conflict.

Other than that, my main complaint was one that I commonly have in NA romances – serious issues are introduced but because the characters are so young, and because of the limitations imposed by the HEA, it feels like the issues are never sufficiently addressed. In this case, both Cooper and Mackenzie have lousy parents. Both sets of parents are cliches – his are poor/druggie/criminal, while hers are rich/cold/appearances-above-all-else. I kind of wish we’d at least see the characters in therapy by the end of the story. Otherwise, the treatment feels shallow and vaguely “pull yourself up by your bootstraps”/nature over nurture, and that doesn’t sit well with me.

Niggles aside, the writing is good, the setting is appealing and the characters – especially Mackenzie – are likable. I am looking forward to future books in the series. 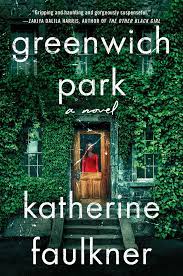 Helen has just gone on early maternity leave for her high-risk pregnancy, and she finds herself at loose ends. She meets the younger Rachel at a prenatal class; Helen’s husband cancels at the last minute and Rachel’s there alone. Rachel, younger, loud and inappropriate (she smokes and drinks in spite of her condition) attaches herself to Helen, and Helen, for reasons that I couldn’t quite figure, lets her.

I tried to accept that Helen was lonely and rather neurotic, and didn’t have the wherewithal to shut down Rachel’s persistent attempts to insinuate herself into Helen’s life. But Rachel is also repellent, and Helen did seem to be repelled by her at times. Between that and the fact that Rachel starts suspiciously turning up everywhere that Helen is, it’s hard to credit that Helen wasn’t more wary of Rachel.

From there, it’s a twisty ride through secrets of the past (something mysterious happened while Helen, her husband Daniel, her brother Rory, and Serena were all at Cambridge together) and the present (gee, why *is* Helen getting repeated calls from lenders regarding the mortgage she definitely never took out?). Meanwhile Rachel is lurking in the background like a malevolent spider, hovering over Helen and interfering with her relationship with Daniel.

The resolution was…pretty good? It tied the past and the present together neatly, and nobody’s behavior seemed hugely out of left field. I didn’t care for most of the characters that much though – Helen is too mousy to really root for, and everyone else besides Katie (who has a smaller role in spite of being one of the narrators) kind of sucked. Still, I’ll give Greenwich Park a low B+, for pure readability. It manages to build a tone of increasing claustrophobia and dread leading up to the climax, and that’s something I like out of a thriller. 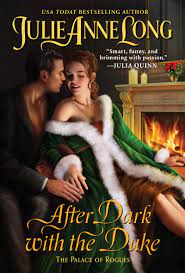 After Dark with the Duke by Julie Ann Long

If my book log is to be believed I have not read a Julie Ann Long book since I gave The Legend of Lyon Redmond a C- in 2015. So, it’s been a while. Janine mentioned enjoying this book, which is actually the fourth book in the Palace of Rogues series. I’m so glad she suggested I give it a try.

Mariana Wylde, a 25-year-old opera singer embroiled in a very public scandal over two dumb aristocrats fighting a duel over her, arrives at The Grand Palace on the Thames in the middle of the night, seeking refuge. The Palace has apparently become a sort of exclusive hotel for eccentrics and lost souls over the first three books in the series, and the two women who run the place (heroines of earlier books) agree to take Mariana in.

Arriving shortly after is the famous and universally admired Duke of Valkirk, a war hero who is retreating to the Palace for respite from social obligations so he can write his memoirs in peace. He’s a widower, and almost 20 years Mariana’s senior. The two clash at first, because the duke, given name James, is extremely disapproving of Mariana’s reputation as a heartless harlot responsible for almost getting a young man killed. (The fact that Mariana has very little, if any, responsibility for the duel, apparently doesn’t occur to him. I actually liked this detail, as I thought it was true to James’ character and the prevailing attitudes of the era.)

After an argument between the two goes too far, James is forced to make amends to Mariana by giving her Italian lessons (as an opera singer, it’s useful for her to know what she’s singing). This, of course, ends up being the catalyst for a relationship to develop.

I really liked After Dark with the Duke, mostly because I really liked Mariana. A cobbler’s daughter, she has managed to rise somewhat in the world on the strength of her voice. But she wants to rise farther, so she has enough money to support her mother (her father has died). She did get somewhat caught up in the unsavory aspects of being an opera singer, but she’s by no means the bad girl the world (or London and the duke) think she is. She takes ownership of her mistakes but is determined to overcome them – she’s just not sure how.

I liked James too – this was a book where the age difference worked for me, because if he had been 30 and as judgmental and stick-up-his-you-know, I might have found him too prissy. But somehow I felt that he had been hardened by life and the military to have a very black-and-white code. His first marriage was not a happy one; but he has a grown son whom he does love – his love for his son was one of the softening features of his personality. He fights against his attraction to Mariana but of course she’s actually what he *needs* in his life.

This might have been A range for me but for a couple of things: the barrier to the HEA is set up as insurmountable, and then it just…isn’t. I would’ve liked to have seen more of the internal conflict there for the resolution to be believable. Also, in general I felt like the ending was just sort of a fizzle, and maybe due to that the book just didn’t stay with me the way I expected it to. For those reasons, my grade is a B+. I’m looking forward to getting caught up on the earlier books in the series, and to reading book #5, which I believe comes out next month.