My 2022 reading slump continues; I don’t have much for “what I’ve been reading” for the second quarter in a row. I did read and review Steadfast, The No Show, You Were Made to Be Mine, and Sea of Tranquility, the latter two with Janine. Other than that, I read these four books: 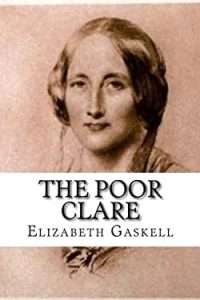 The Poor Clare by Elizabeth Gaskell

This was a strange story. I thought it was a novella going in, but it’s more of a longish short story. Wikipedia says it’s a “gothic ghost story”, but there’s not really any ghost. Rather, a series of events lead a young woman to be cursed with a doppelganger that follows her around and turns everyone, including her own father, against her. Apparently, having a clearly evil demon appear wherever you are is off-putting to the people around you. Who knew?

The narrator is a young lawyer who is tasked with tracking down the inheritor of some property in Ireland. He finds the woman, an elderly recluse named Bridget Fitzgerald. Bridget in turn asks the narrator for help finding her daughter, lost to her many years before. He finds Bridget’s granddaughter, the demon-twinned Lucy. The narrator falls in love with Lucy (she is so saccharine sweet that if it were me I might like the demon better); the narrator, unlike others, is not completely repulsed by her curse. He is determined to lift it, though, and finds that it leads back to Bridget herself.

Again, this story is strange. I think of Gaskell’s writing as being rooted in realism, but I guess her short stories (most of which I have not read) tend toward the gothic. The Poor Clare climaxes in Antwerp, of all places, where the Flemish populace are in revolt against their Austrian rulers. The narrator is searching for Bridget, who has joined the Poor Clares, a Catholic order of nuns who are unusually dedicated to a life of poverty and self-abnegation. I have the faint impression, perhaps unfair, that Gaskell was somewhat anti-Catholic (which isn’t surprising for a woman raised in 19th century England and married to a Protestant minister). I didn’t notice any overt anti-Catholicism in the story, though there is of course a whiff of mysticism that could be fairly associated with curses and evil doppelgangers. I think I would’ve liked it if the story were a bit longer; it didn’t really have much emotional heft at the length it was, and none of the characters were very interesting, save Bridget. I gave it a B. 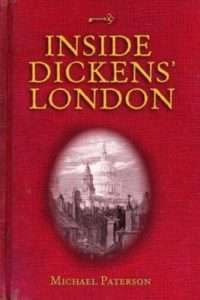 Inside Dickens’ London by Michael Paterson

I picked this up somewhere on sale; I was willing to take a risk at $2.99. The blurb:

Inside Dickens’ London draws on descriptions of life in the capital from original letters, diaries and newspapers, as well as Dickens’ own social commentary, to paint a vivid portrait of a city undergoing massive social changes. No author has ever described the city of London as well as Dickens. His eye for detail and his gift for characterization moved and entertained readers throughout the world who might never have been to the city. Many of the clichés that crowd our imaginations when we think of London, or of the Victorians, can be traced back to his writings. A unique gazetteer section with a modern-day map allows the reader to discover where places and attractions mentioned in the text can be seen in today’s London.

Sounds interesting, right? Except it wasn’t, at least not to me. This might be a good reference book for someone looking for information on Victorian London, but as a reader I found it dry and rather plodding. It’s divided into chapters such as “Entertainment”, “The Poor” and “Crime and Punishment.” I kept hoping that one of the new subjects would pique my interest, but alas, no. It’s telling that when I looked back to see which pages I marked with notes or highlights…it turns out I didn’t. I honestly started skimming midway through. 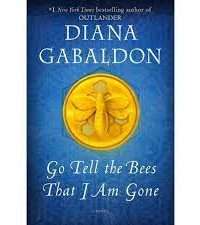 Go Tell the Bees That I Am Gone by Diana Gabaldon

What to say? I started this in December of last year and finished it in June (reading slump FTW!). Kaetrin managed to read and review it by January 10th, a feat I still marvel at. Anyway, I *was* going to write my own review, and got quite a few words into it, but general malaise has kept me from finishing it, plus Kaetrin’s review is great.

I did like it better than Kaetrin did, though. I gave it a B+, because I am immersed in the world Gabaldon has created over nine books enough that there’s only so low I can go in grading these books. Still, I am suffering from Claire Fatigue, a condition with no known antidote. And unfortunately, Brianna is kind of Claire 2.0, so even when you’re not getting Claire, you’re still often getting Claire.

Fortunately, there are a lot (a LOT) of other characters, and my attention generally perked up when we were following Young Ian and Rachel, or Jamie’s illegitimate son William (though William’s path in the book is rather meandering, and I am side-eyeing his love interest hard; I don’t quite like her).

The book is episodic, as most of the books in the series after the first few have been. Maybe “episodic” is inevitable when you end up following different sets of characters in different places. I didn’t mind it, but it means that some parts drag more than others, just based on my interest in who is on the page and what they’re doing.

The equivalent for me to Kaetrin’s weariness over bee talk (I liked the bees!) was Roger’s quest to be ordained as a Presbyterian minister. I just didn’t care that much; I don’t care about Roger that much at this point, and the storyline and Roger’s musings about his faith were kind of dull to me.

Maybe the book as a whole would have wowed me more if I’d read it more quickly. It wasn’t just boredom that kept me from finishing it, or even my general book malaise. Conversely, it was partly that I wanted to be able to savor it; who knows when the next book will be out. But I think the effect ends up being somewhat flattening – it can be hard to remember what happened at the beginning of a 900 page book by the time you finish it in any case, but when you finish it six months later, it’s well nigh impossible (at least for my creaky brain). Still, a B+ it is. 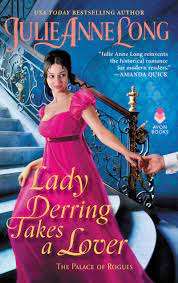 Have read books four and five in the Palace of Rogues series, I decided to start back at the beginning with this, the first book. The Countess of Derring loses her husband and discovers that she’s lost everything along with him – her home, her possessions, her friends. What she acquires is a rundown building by the docks, an old brothel the Count used to frequent, and a partner to turn it into an exclusive boarding house. That partner, Angelique Breedlove, happens to be her late husband’s ex-mistress. Together with the loyal maid and cook that Delilah, the countess, had previously employed, they work to make the building they christen the Grand Palace on the Thames into a business that will support them, and a home for various lost souls.

The hero, Captain Tristan Hardy, is a naval hero on the hunt for smugglers. He becomes one of the Grand Palace’s first clients, in disguise because he suspects Delilah and Angelique of being involved in the smuggling. Tristan and Delilah, of course, fall into insta-lust. Both are wary of entanglement for various reasons (I mean, again, he thinks she might be the criminal he’s trying to catch).

Lady Derring Takes a Lover was honestly kind of forgettable to me. The main characters, especially the hero, felt a bit cardboard. It was interesting to see the genesis of the Palace of Rogues, however. I will continue and hope I like books two and three better. I gave this a B-.