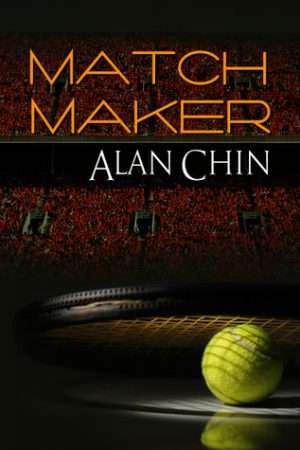 In the four years since being forced off the professional tour for being gay, Daniel Bottega has taught tennis at a second-rate country club. He found a sanctuary to hide from an unkind world, while his lover, Jared Stoderling, fought a losing battle with alcohol addiction to cope with his disappointment of not playing on the pro circuit.

Now Daniel has another chance at the tour by coaching tennis prodigy Connor Lin to a Grand Slam championship win. He shares his chance with Jared by convincing him to return to the pro circuit as Connor’s doubles partner.

Competing on the world tour is challenging enough, but Daniel and Jared also face major media attention, political fallout from the pro association, and a shocking amount of hate that threatens Connor’s career in tennis, Jared’s love for Daniel, and Daniel’s very life.

This book came up when I asked my book buddies for some recommendations for m/m romance with tennis settings. Turned out I already bought it years ago but never read before. I have to admit it was a strange reading experience. I love watching tennis, I would not have minded reading a fiction book purely devoted to tennis even without a romance in it, so correct depiction of tennis is important to me and I think that author either knows the sport well, or conducted good research where tennis terminology was concerned.

However, from the position of a fan who never played but who follows the sport a lot and reads about it a lot, some things made me scratch my head. I can, obviously, be wrong; I cannot claim any insider knowledge, only outsider one.

Daniel narrates the story and as he is a tennis coach, it makes sense that for him the coach is the figure who makes the match so to speak. And of course coaches are super important, probably more so for younger players like Connor, but it just does not seem to me that over ambitious parents of brilliant young stars who break in the first hundred will give up control, the place in their offsprings’ lives in favor of somebody else calling the shots. I know that Connor’s father does not completely disappear but still it just did not ring true to me what happened in the beginning of the book.

Daniel seems to be a very good coach, who pays attention to the mental aspects of the game too, which was fun to read about.

I am also confused about the villain of the piece. It is not as if I have the right to question the existence of homophobia on the tennis tour – once again the year is 2022, and we still do not see any out gay or bi male tennis players. I am not saying that they should come out, it is obviously their decision! I am saying that there are probably reasons why they do not. However the villain in this piece sounded completely cartoonish and just so off. I am not questioning the fact that the fictional president of the ATP can be a raging homophobe, but I am *absolutely* questioning the idea that a fictional president of the ATP would go as far as bully all three major masters clay tournaments to take back wild cards from the out gay player.

I mean at least we did not see the ATP president trying to bully any of the Slams into taking back their wild cards haha (for obvious reasons), so I guess I have to be thankful for that, but I feel like Rome or Monte Carlo masters would laugh at him too?

And the last stunt he tried to pull? I do not even want to describe it, because I rolled my eyes.

But let me talk about the love story, because blurb does mention it. Jared and Daniel are in an established relationship when the book begins, but they are having problems. I wish we would have learned why they were having problems, but this is does not ever happen. It was just so strange and I felt that this part was not well executed because this is the main relationship of the story. I mean of course the book is not a romance and I did not expect it to be a romance, but any problems between the main characters I think deserved at least an answer to the question why it happened.

I do suspect that we were supposed to make a leap between Daniel and Jared experiencing homophobia when they were playing in their early years and the issues they were having, but once again – that’s entirely my speculation. And when they are back on the circuit in the second half, their relationship surely gets more dynamic and the author has absolutely no problem showing how what was happening around them affects them! It was great – not the issues they were going through, but how they were dealing with what was thrown at them.

I appreciated that tennis always remained a major part of the story. Even when the relationship took more of the center stage, it was always connected to tennis, though some of it felt over the top.

I really liked some of the tennis related descriptions though. Here is how Connor answers the question why he likes tennis.

““Everything about tennis is awesome. The feel of the ball on your racket, the way your body moves through the stroke, hitting a difficult shot just the way you mean to, it’s all totally killer. But what I love are those times when my game kicks into light speed and I’m not there anymore. It’s just the ball and the racket, and I’m whooshing around the court making impossible shots look routine. When that happens, I can’t miss. I mean, I play wicked tennis, but it never lasts more than a game or two, sometimes a whole set. But that’s what I love, when that thing happens.” A warm wave, fired by hope, surged through my core. “That’s called being in the zone.” “Duh, I know what it’s called. I didn’t just tumble out of the cradle.””

Speaking about Connor, I liked him a lot, except when he was portrayed in the relationship, because it was cringe worthy to me how his girlfriend was portrayed. I just did not buy that they had any kind of the future together. C