Somehow I’ve managed to go this far without reading one of your books. Amazing, I know. I was surprised too when it dawned on me. But I’m afraid that “Hush,” despite the parts I liked, probably won’t turn me into a fan for life. Just too many woo-woo and WTF moments while I was along for the rocket fueled ride. 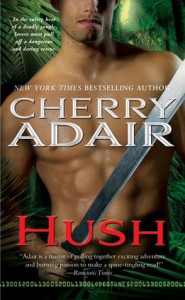 Zak Starke and his brother Gideon are adrenaline junkies in the jungle of Venezuela for another of their crazy, risk taking stunts. Why not since they have more money than many small countries. But when armed men wake him up in his hotel room, along with the hot babe he spent the night with, then kidnap him, her and his brother, things turn into a clusterfuck. Driven for hours into the jungle then held in primitive jail cells, Zak knows that as much as he doesn’t want to be responsible for anyone else’s life, he’s now in charge of saving himself, his injured brother and Acadia Gray.

Acadia is so far out of her comfort zone it’s like she’s in another solar system. Dared by her friends to come along on this trip, she’d decided to throw caution to the wind for a one night hookup with a hot guy she knew she’d never see again. Only now she’s stuck with him and his brother in a jungle hell hole and not sure she’s going to survive. Luckily for them all, she’s worked in a sporting goods store for years and came prepared – and the kidnappers dismissed her as an airhead blonde and didn’t search her.

Once they make a break for it, there’s still hundreds of miles of jungle to traverse and armed men after them. And though Zak is aware that without Acadia they’d never have got this far, he still wants to get back to civilization, get her to safety as quickly as possible and start figuring out who’s behind this elaborate plan. One problem, the thugs are still after them and everywhere they turn, it seems like things get worse.

I said rocket fueled and I meant it. The story starts with a bang up opening scene that, as a woman, had me cringing for Acadia even as the momentum started to build. The disorienting events continue to spiral faster as I learn from the description of the jungle that this is a place I never want to go. Eight inch tarantulas? I’ll pass. The statistics Acadia reels off about the kidnapping and murder rate there also strengthen my resolve to be an armchair visitor to the area.

The romance between these two is actually something that works well for me. Yes, they do go at it as much as bonobo monkeys even after a gunshot wound and days of exhausting jungle travel fleeing from armed killers but, by the end of the book, I believe that somehow these two have found in each other that lifelong someone. That somehow they’ve gone from hot sexing, to actually disliking each other to grudging acceptance to true care and end with “s/he’s the one!”

I do love the fact that despite Zak being all he-man and testosteroned up, it’s Acadia and her travel vest of goodies and headful of information that initially act as their “get out of jail” card. And her ability to play Texas Hold ‘Em. From the number of times that you mention the specific name of this fabulous travel vest, I did wonder if you were getting product placement money. As they hiked and macheted their way to freedom with no insect repellent and drank from streams along the way, I was also amazed that they didn’t end up with chagas disease, leishmaniasis or schistosomiasis.

A Swiss army knife will only get you so far and eventually Zak has to call on outside help. Isn’t it nice that he knows somebody who seems to have invented black ops? And that he’s got a shitload of money from the internet search engine company he helped invent. That’ll get you all kinds of safe houses in Caracas as well as Blackhawk helicopters. It’s along in here that my suspension of belief started to raise an eyebrow. When Zak discovers his newfound talent, my s-o-b groaned. And when the final batshit crazy villain is revealed, my s-o-b stood there, hands on hips, and said “You’ve got to be fucking kidding me!”

And that is why, even though I read the whole book in one day, and enjoyed the romance relationship, and felt like I was on one of those roller coaster rides that flips you upside down and backwards, I am grading this book an average C grade because the WTFuckery is just too much.