When I checked your website and saw this book mentioned, I got all excited and checked the eHarlequin site for ages waiting for it. Then it appeared and I read the blurb and thought, this sounds familiar. And for good reason as it was previously published as “Tenderly,” the fourth book in the Navajo Family Blessings series, way back in 1998. But just because I’d already bought a (used) copy and loved it didn’t stop me from buying it again, especially as you would get to actually see some moolah from me out of this deal. 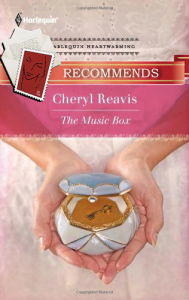 Okay the blurb is slightly different from before and there are a few differences in the book, CD players have been updated to MP3s and the sex scenes removed, but this is basically the same story I fell in love with then. And that I’ve fallen for all over again after rereading it now. Ben and Eden are two flawed people, falling in love and dealing with a lot of issues.

Ben Toomey, an officer on the Navajo tribal police force, has no idea what’s up when he gets the message that Dr. Edna Trevoy is back in the area. As a child, he helped his father and several other Navajo men when they worked with Trevoy years before when she was studying the Anasazi and he vaguely remembers Edna’s daughter Eden. As several people will warn him during the book, Eden has been raised as the kind of woman who can breeze in and really hurt a man, a rich white woman who might toy with a Navajo man but who would never love him enough to stay. He knows Eden is nothing but trouble for him but he can’t help slowly falling in love with her.

Eden’s world gets rocked when her dying mother tells her that Eden is adopted. Though Edna had never really been that close to her, at least Eden had an identity as her daughter. Now she only knows that her white mother didn’t want her and that her Navajo father didn’t either. Suddenly she’s a half caste bastard with no family and no idea of who she really is.

Ben suggests that Eden stay with his grandmother Sadie for a while and learn something about the Navajo way of life. Of how to live in harmony with oneself and one’s world. Eden agrees and begins to find her place in the world and with Ben. A man she knows the world will disapprove of and one she wonders if she has the courage to stay with.

Lots happens in this book but you pull it all off without rushing or skipping much. Eden’s feelings of abandonment then anger over her past. Ben and Eden’s quiet falling in love even though they are told there’s little hope of a future for them. Eden’s growing knowledge of her Navajo heritage. And some revelations about past events that include characters from this and past books. Revelations that thankfully don’t get rushed into a quick HEA for all. You show both the bleak and the beautiful about life on the Rez, the danger and the dullness of being a cop, and about how Eden is torn but determined to learn who she is.

Navajo daily life is woven deep into the story and the characters. It is used not only as a contrast between Ben and Eden but shows some similarities as well. Eden got sent away to Eastern boarding school while Navajo kids were forcibly shipped off to boarding schools to strip them of their heritage. I think a major thing to know from book one is about how the tribe has authority over all children with Navajo blood. Edna’s memorial service highlights several differences. The way some information is presented as Eden begins to learn about her past worked for me as it doesn’t come across as an info dump. I love Sadie and how she rules the household. Ben does what she says and replies, “Yes, ma’am.”

Clues to Eden’s heritage are scattered throughout the story but it’s only after the truth has come out that they are evident. Eden’s reaction is realistic. She gets all she knows about her family yanked away from her then something she never expected put in its place and she’s not a happy camper. She has to have time to process. Then when she does discover who her father is, she’s got to do another 180 degree turn. The scene where Eden’s grandmother finally meets her and laments the lost years almost had me in tears. Then when, as the head of the household, she questioned Ben’s intentions towards her granddaughter, I was laughing again. Ben’s proposal is a delight.

Even though this is the fourth book in the series, I think it stands alone. If pressed, I would say that reading the first book, “One of Our Own” might help readers better understand some of the secondary characters and the background regarding how the Navajo view their children. I hope that Harlequin will eventually re-release all the books (One of Our Own, Meggie’s Baby, Mother-to-Be) but I’m tickled pink that this one is available again. A-