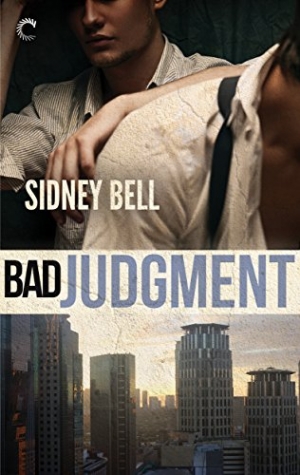 Embry Ford was a quiet, ordinary guy—until tragedy ripped his life apart. Now he’s living under the radar, desperate to hide his identity and determined to learn the truth behind what happened. Even if that means working for—and bedding—a man he loathes.

As a bodyguard to a shadowy arms dealer, Brogan Smith knows distractions can kill as easily as a bullet. But when he sets his eyes on his client’s sexy assistant, he can’t get him out of his mind. Even more unnerving: the closer he gets to Embry, the more Brogan starts to suspect he might be protecting the wrong man.

Embry was sure nothing but vengeance would satisfy him—until Brogan offers him something far more tempting. Now Embry must choose: punish the people who nearly destroyed him or fight for a future with the man who has become his entire world.

First and foremost I have to disclose that Carina press sent this book to DA as part of a regular review query email and I was so tempted by “perfect for Josh Lanyon’s fans” that I caved in to that temptation even though I’ve almost completely stopped accepting ARCs. I bought it right away, but I still read it early.

I also have to note that the person who wrote the blurb certainly knew what they were doing, because if it had been phrased a little differently there is no way I would have bothered with the story. No way.  The book starts with Brogan’s boss in the security firm asking him to participate in the protection of a difficult client, because Brogan supposedly knows how to deal with difficult clients and nothing will faze him. I want to stress, there is no indication whatsoever that the client is participating in breaking the law.  While I was not sure whether Brogan’s boss would have gone along with that, nothing later in the book indicated that the firm was shady. They did sign a non-disclosure agreement before working for this client, and that’s something they had done in the past, but that to me seemed like a good business practice.

So, a lot of things take place in the story before we get Embry’s POV, and for a long while we only hear from Brogan. The POV is third person limited.  And this experienced bodyguard who is used to dealing with difficult clients, completely forgets what his job actually is (hint, it is to protect Embry’s boss and lover) and starts flirting with Embry, who certainly knows how to snark back, and to borrow an expression from a book buddy about this trope, Brogan “starts thinking with his other head”.

The problem was that Brogan had always been the kind of man who found competence sexy. And Ford was, quite possibly, the most competent person he’d ever met, especially for someone who should’ve still had zits (but didn’t) from tripping over the last vestiges of puberty. In fact, Ford’s mastery of his environment meant that he’d single-handedly terrorized half of Touring’s middle management into excellent work performances as well.

I guess it’s good that Brogan did not think that the other guy would also find competence sexy, because to me he certainly did not show much, if any.

Perhaps worst of all, Brogan very rarely wanted things, which meant that when he did come across something he wanted, he had next to no capacity to resist. Which explained why Brogan kept biting holes in his lip when Ford ignored him. The fact that Ford could ignore him was proof that this pheromone insanity was one-sided.

I do not believe he was ever able to come up with better rationalization than this one and I did not find this one good at all.

I vented about this many times, but let me do it again. I perfectly understand that “unprofessional professionals” is a thing and many readers seem to love it. I mean, in my limited circle of book buddies I have not met people who enjoy this trope, but my circle is limited indeed, so to each their own.  I remember looking at Carina Press’ submissions page which specifically asked for this trope, so clearly it is not going anywhere. I usually extremely dislike “unprofessional professionals” especially where people involved are supposed to save lives.

It is not because I want a romance story to turn into something else, say into a detailed treatise about what the main character supposed to do at work. No, it is because in romance character’s profession is often a reflection of his personality, often of his better character traits. That’s why I think that we so often see soldiers, policemen, doctors in romance. Because part of the attraction of the romantic lead (for me anyway) is that they often want to help people. And they should be competent and taking their jobs seriously, right? A policeman who sleeps with a suspect is not taking his job seriously. Neither is Brogan, who is supposed to guard his client but instead spends his days trying to figure out first how to make Embry respond to his flirtations, then how to have sex with him, and then figuring out how to help him in his quest for revenge.

Of course there are ways to make this trope tolerable for me and the way blurb was written I thought the bodyguard knew that he was protecting a criminal from the very beginning. Now before you say it, yes I know that in the real world he would have still been obligated to do his job, whether his client was a bad guy or not, maybe more so if the client was a bad guy. But in romance I can forgive forgetting about his job to bring down the bad guy. And that’s why I felt okay taking a look at the book. But he doesn’t! At best his client is suspicious and till chapter 8 there is pretty much nothing to support those suspicions.

All he can think of is Embry, who is the executive assistant and lover of his married boss. He is thinking of Embry pretty much from the beginning of chapter two.

I want to state that I liked the banter between Embry and Brogan quite a bit, and in a different setting I would not have been as irritated with both of them as I was, but even the banter did not help when I started to think about how stupidly and unbelievably one or both of them acted at some points in the story.

“Do you often lurk outside of meetings to annoy people?” he asked.
Brogan grinned. “I’m making friendly conversation.”
Ford scowled. “You call this friendly conversation? You’re trying to fuck with me.”
“I think you just called me a liar,” Brogan said, amused despite himself. No, Ford didn’t suffer fools gladly, and he found the sharpness refreshing. “That’s not very nice.”
“I’m not a nice person,”…

Basically, throughout this book I was having suspension of disbelief issues, quite a lot of them. If you are able to suspend disbelief and roll with the punches you will enjoy the story better than I do, because where the love story was concerned, I really did like the writing and wanted to stop and reread some sentences.

Of course, based on the blurb I’m sure you’ve figured out that not everything as it seems with Embry and that he is working in the company because he is on a revenge mission, so this is basically a romantic suspense storyline. I did not buy him being able to prepare so thoroughly, but opinions can of course differ.

→ Sirius
Previous article: Friday News: Is Voynich a hoax?, global threats to creative expression, it takes a village to make a book, and Cinderella for business moguls
Next Post: DAILY DEALS: An assortment of romance from the thrilling to the heartfelt