REVIEW: April and May by Beth Elliott 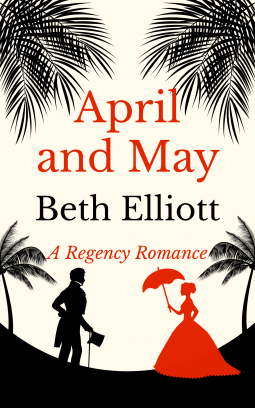 When they met in London in 1799, Rose Charteris and Tom Hawkesleigh fell instantly in love. But disapproving families and misunderstandings came between them, and the romance was over as quickly as it started.

Five years later, Tom is working for the Turkish ambassador in Constantinople and he runs into Rose once again when they cross paths in the ambassador’s quarters. Now a widow, and a fiercely independent woman, circumstances mean that Rose has no choice but to work with Tom on a top secret and dangerous document for the Sultan.

Work in Constantinople becomes increasingly perilous, with spies from all sides desperate to find out what is planned. Even back in London, danger is not far away. Rose also has the burden of finding her place in high Georgian society, as well as trying to decide between the increasing charms of both Tom and ambassador Kerim Pasha.

Will Rose be able to evade the increasing threat to her well-being that her work has led to? And will she succumb to her desires and give Tom back her heart?

Spanning the magical lands of Constantinople and the traditional streets of London, April and May is a heart-warming tale of a love that knows no boundaries.

Once I read the blurb for this book and saw it was partially set outside of the London Season – and in Constantinople no less! – I was hooked and simply had to try it. Get thee behind me Almack’s Patronesses with your watery lemonade and stale refreshments. This looks to be far more interesting.

Rose and Tom felt instantly sympatico when they met four years earlier but after an encounter in an empty room and discovery by Rose’s harridan of a sister-in-law, the two were hustled apart – their possible marriage ruined by family machinations. Letters were intercepted, emotions were devastated and both were left with bitter feelings. Rose was hurriedly married off – though quickly widowed by her naval husband – and Tom was banished by his family.

Now Rose travels with her sister and Egyptologist Aunt and Uncle while Tom has been transformed into a quasi MI6 – Mission Impossible agent. Fate tosses them together again in Constantinople with Tom reluctantly bringing Rose into high stakes political maneuvering which involves not only Britain and France but pit Ottoman military reformers against hard line conservatives.

Once they’re all back in London, Rose breathes a sigh of relief as she prefers city life while her relations yearn to be back in Egypt studying ruins and ancient languages. Several unmarried young women have designs on Tom which annoys Rose before she remembers Tom is merely an acquaintance now. Or is that all he is? Tom, of course, moodily watches male interest in Rose thinking he has no chance with her anymore. Or does he? They might have made some progress in putting the past behind them but a full understanding is still in the works.

The intrigue which has followed them from Constantinople throws Tom and Rose together even as neither can stop thinking of the other. Will they triumph over the forces at work against a British/Ottoman alliance and can they find their way back to the relationship they once almost had?

Rose and Tom finally reconnect with each other as partners in life rather than as conveniences. I was happy that a good portion of the book is set in Constantinople. The Turkish scenes seem accurate and detailed – explained well but not a pedantic history lesson. They also didn’t seem to be there merely as an exotic “other” but as a necessary part of the story. Once the setting switches to London, those sections seemed more languid with some action referred to in past tense. Still for the unusual and well done setting of Constantinople, I’ll deal with a bit of languor. B-

→ Jayne
Previous article: DAILY DEALS: An assortment of romance from the thrilling to the heartfelt
Next Post: Open Thread for Readers for October 2016