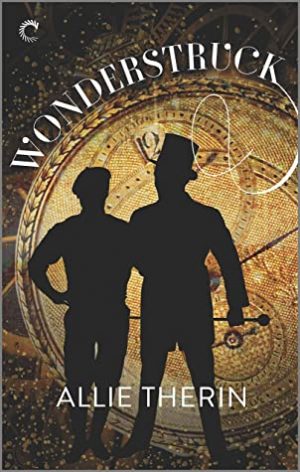 Arthur Kenzie is on a mission: to destroy the powerful supernatural relic that threatens Manhattan—and all the nonmagical minds in the world. So far his search has been fruitless. All it has done is keep him from the man he loves. But he’ll do anything to keep Rory safe and free, even if that means leaving him behind.

Psychometric Rory Brodigan knows his uncontrolled magic is a liability, but he’s determined to gain power over it. He can take care of himself—and maybe even Arthur, too, if Arthur will let him. An auction at the Paris world’s fair offers the perfect opportunity to destroy the relic, if a group of power-hungry supernaturals don’t destroy Rory and Arthur first.

As the magical world converges on Paris, Arthur and Rory have to decide who they can trust. Guessing wrong could spell destruction for their bond—and for the world as they know it.

This appears to be a conclusion to “Magic in Manhattan” series. I say appears because blurb says so, I have no idea whether the next book will be coming in Rory and Arthur’s adventures and if it will be I am not sure if I will invest in it or not. I say it because unfortunately my enjoyment of this trilogy went down instead of up with every new book. I loved the first book, liked the second book quite a bit but not as much as the first one and this one I overall liked the least.

Initially I was bored, then when the story picked up the pace and was entertaining I was annoyed at “oh I need to tell you a very important thing, but of course I will not, because – I am afraid to lose you and it is not fair to you, etc, etc, etc”. I had been there, read that too many times and do not get me wrong sometimes this works, but, man, the character better have a *very* good reason to be quiet and here as far as I am concerned well, he really did not have that good a reason.

At least I understood why I was irritated with the “I am not talking ” plot development, but I could not understand why first quarter of the story I was bored and then the feeling of the boredom kind of returned at the end after the story climaxed and then it dawned on me. I did not feel like I got enough of the payoff. I mean hunting the magical relics was something that I found fun and very promising in the first book and do not get me wrong, all the villains got punished here and good guys fully prevailed, but I was not really seeing what effect this all had on the world as a whole. It is hard to explain, but I almost felt like saying “that’s it?”

It is quite weird that I felt that way, because last quarter of the story was quite suspenseful, but somehow I was still disappointed with the ending. I guess the relics themselves disappointed me. I know that those things became very destructive for paranormals in the world of these books, but it still did not quite work for me.

I still like Rory and Arthur, although their chemistry somehow diminished for me as well.