I vaguely recall hearing about your two previous books, Broken Wing and Libertine’s Kiss, and being a bit intrigued. They sounded like a bit of something different, with unusual settings and good reader buzz. When the opportunity came recently to read The King’s Courtesan, I jumped at the chance. 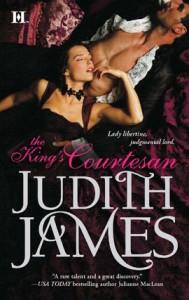 Hope Matthews and Robert Nichols both have traumatic pasts; Hope was raised in a brothel by her madam mother, who sold her to the highest bidder when she was just fourteen. Ten years later, Hope has risen in the world; she’s one of Charles II’s many mistresses. In spite of her somewhat tawdry profession, Hope has managed to retain her sweetness and innocence.

Robert’s story is even more tragic; he was only twelve when, with his parents away, Cavaliers invaded his family home and killed his beloved sister. Tormented by her memory and his own guilt at not saving her, Robert fights for the Puritans, soldiering while hunting down his sister’s killers. Once the war ends and Charles II is restored to the throne, Robert returns to his country manor, but the memories still haunt him; one of his targets has evaded him all these years. His life only becomes more empty and painful when he receives a royal decree ordering him to surrender his lands. Rebels against Charles II enjoyed a general amnesty, but it just so happens that Charles owes a powerful man a favor, and what the man wants is Robert’s estate.

All is not lost, though; when an old friend of Robert’s (the heroine of a previous book, Libertine’s Kiss) finds out about his lands being confiscated, she complains to the king (another friend and former admirer of hers, apparently). Charles decides to kill two birds with one stone: he has been trying to find a husband for Hope in order to make her more respectable. Charles is to be married to the Portuguese Infanta, and Hope, knowing her presence at Court will not be welcomed as easily by the new queen as that of Charles’ official mistress, the aristocratic Lady Castlemaine, has asked for his permission to retire to the country. She has money saved and only wants to live a quiet and respectable life. She cares for Charles, even loves him a little, but she knows he cannot really love her and would prefer to have her freedom. Charles balks at this, and schemes to wed Hope to a man who is respectable enough to restore her honor (at least the pretense of it) within the Court. Robert Nichols needs something from him, and so Charles summons him to London; he figures he’ll get Hope married off to Robert, sent off to the country for a while, and sometime after his marriage she can return to Court and to Charles’ bed.

I liked the set-up here relatively well; Robert and Hope are somewhat evenly matched in that both are at the mercy of their powerful king, and don’t actually have a lot of say in the matter of their own marriage. Robert at least is given the respect of being told about it ahead of time (Charles also graces him with a new title and some extra lands in addition to returning Robert’s original lands to him, to sweeten the pot). Hope, on the other hand, ends up tricked into marriage and bundled off with Robert to his country estate practically in the blink of an eye. She is furious with Charles, and furious with Robert as well, thinking him nothing more than a base fortune-hunter (this after feeling an overwhelming attraction upon first meeting him). For Robert’s part, he is attracted to Hope as well, but angry about the marriage and feeling like a cuckold already.

So, the story here is pretty straightforward. Robert and Hope are tied together, at least for the time being, and full of misunderstandings about each other. This leads to a dynamic that I’m less fond of: the bickering hero and heroine. Robert and Hope have a basic pattern that they cycle through on the way to and after arriving at his estate: make goo-goo eyes, get along briefly, get into a dumb fight, sulk. Lather, rinse, repeat. I was tired of it after the first go-round.

I think one of the reasons I was interested in this book was the feeling that I got that it was a bit “old-style.” And it is. But I forgot that this is a double-edged sword – those old-style romances have aspects I really like and miss (different settings!), but they also have aspects that I don’t care for (rather overly traditional and conservative gender characterizations).

Ultimately, it’s on characterization that the book really started to falter for me. Robert is a stock character – brooding, tortured soldier who feels that no one can love him because of the blood on his hands. Hope is, to be a bit flip about it, a hooker with a heart of gold. She’s had a hard life, sure, but it hasn’t kept her from being extraordinarily pure of heart and fairly pure of body. It turns out (quelle surprise!) that Hope is less experienced than advertised…considerably less experienced than one would expect of a girl raised in a brothel, sold at 14, and mistress to a king. Since the “experienced heroine” hook was part of the attraction of the book for me, I found Hope’s innocence and sweetness rather irritating. That is already not my favorite type of heroine (though it can work in some books), and I already resent the age-old romance dynamic of angelic=heroine and cynical and worldly=hero. Throw in the lack of truth in advertising, and I’m a pretty annoyed reader.

Not that Hope is entirely a softy – she deals fairly well with the at-first hostile staff of her new home, and she has a reputation of being somewhat saucy (one of the things that attracted Charles to her in the first place). Perhaps it’s in Robert’s eyes that Hope seems the most childlike and angelic:

His thoughts were filled with a sad-eyed elf with violet eyes.

She patted it absently as she watched out the window, looking for all the world like a lost little waif.

She looked as fragile as a child and he felt like a great bloody oaf.

A couple of things: descriptions of heroines that compare them to children, when observed from the POV of the hero, should be sparing to nonexistent in romance. It’s really kind of yuck. Also, maybe it’s just me, but at this point, when I hear “elf”, I think “Dobby” from the Harry Potter books, and I’m not sure that’s what the author is going for. It didn’t help that the “elf” nickname eventually sticks as Robert’s chief endearment for Hope.

In any case, the contrasting of the big, brutish hero and the tiny, childlike heroine got old pretty quickly. As did the many descriptions of her raven hair and violet eyes. (Now I’m remembering another negative of older-style romances! Constant mentions of the heroine’s physical attributes! Though my favorite will always be the Jennifer Wilde book that was told in the first person by the heroine and still managed to work in mentions of her auburn tresses every couple of pages.)

The prose in The King’s Courtesan is mostly competent, if a bit uninspired, but I had to laugh at the following pronouncement by one of the hero’s friends:

For my money, he’s been married to that cold dark bitch called war.

No. Just no. Someone – editor, crit partner – someone should have put the kibosh on that laughably melodramatic line.

Reading this over, I wonder if I seem unduly harsh. The King’s Courtesan is not a *bad* book; but it’s not a very good one, either. My grade: C.