I had started reading the first book in the Countess Ashby de la Zouche mystery series a few weeks ago but had put it down for other books. With an indefinite power outage from Hurricane Irene mucking up my day, I decided to apply myself and finish it. Once I refreshed myself about the basics of the plot, the book flew by. 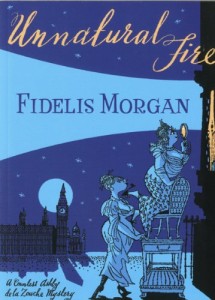 Lady Anastasia Ashby de la Zouche is on the far side of 50 in 1699 England. She’s also somewhat unstable financially and, along with her loyal maidservant Alpiew and somewhat loyal retainer Godfrey, she lives in her lifehold house in London. Reduced to selling society gossip to a weekly news sheet, she jumps at the chance offered by a suspicious wife, Elizabeth Wilson, to discover what the woman’s husband has been up to these past few months.

After following the man for less than 48 hours, Lady Asbhy and Alpiew already have a whole host of bizarre behavior to sort out. At the roughly 48 hour mark things turn bloody as they stumble across his corpse and first Lady Ashby then Mrs. Wilson are arrested for the crime. Though she’s quickly cleared and released, Lady Ashby and Alpiew are in a race against the justice system to save a woman they believe innocent of killing her husband as they attempt to find out who killed Wilson and why.

When I mentioned this book in my reading post, a few people commented about how bawdy it is and agreed with my description of “warts and all” 17th century life. No hygiene, caked on makeup, privies, horse dung, spoiled food, muck of every description – it’s all here and waiting to dazzle the reader. There’s also a wealth of period detail that doesn’t condescend too much to those who don’t know it nor, I would think, would overly bore those who are already in the know. Yet there are also anachronisms – deliberate, or not? – that I easily picked out which then makes me wonder about the rest of it. I’m no expert on the era and I don’t think any of these would affect the plot but historical sticklers might get their feathers ruffled.

As the story progresses clues begin to pile up but nothing begins to add up until very late. When all the clues do begin to fall into place things get wild with all sorts of bizarre occurrences and people who are and aren’t what they seem. The end is a crazy ride to the finish and only then can the reader sit back and think “that was weird and what about….?” Loose ends have to be tied up with information that I’m not sure how Lady Ashby could have gotten about what the dead man saw and did that lead to his death. But I will say that the plot depends on things such as alchemy and the succession which would have been important in the day.

When reading a mystery, liking the protagonists is as important to me as the plot and how the mystery is solved. In Lady Ashby and Alpiew, I think you’ve created two multifaceted people. They’ve got strengths and weaknesses but also intelligence and that drive to know the truth and see justice done. Once “Unnatural Fire” gets going, it’s compelling to keep reading and try to figure out the complicated plot. In order to discover “whodunit” and why, the reader has to remember to trace the usual path of money, power and revenge which, honestly, really hasn’t changed much whether in that fascinating age or this. B-

→ Jayne
Previous article: What Jane Has Been Reading, Week of August 29
Next Post: REVIEW: One Night in London by Caroline Linden