Your debut YA novel, Bleeding Violet, was one of my favorite books of last year, so when you emailed me with an offer to review an ARC of your second book, Slice of Cherry, I jumped at the chance. 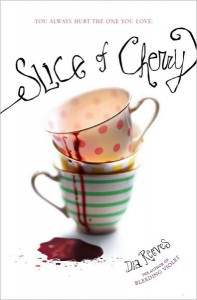 Slice of Cherry is written in third person omniscient narration, but the only character whose POV we are given is fifteen-year-old Fancy Cordelle. Fancy and her seventeen-year-old sister Kit live in Portero, Texas, a town where supernatural goings on are as commonplace as the gory Annas that sprout up wherever dead bodies are buried.

Kit and Fancy are descended from Cherry du Haven, a slave whose ghost makes each person's dearest wish come true – but not always in the way that person wants it to. As Cherry's descendants, the girls may have inherited some unusual powers. But Fancy and Kit are also the daughters of the infamous "Bonesaw Killer," and as such, they have inherited something even more unsettling- their father's thirst for blood. The story begins when a prowler's invasion of their bedroom triggers the teenage girls' penchant for violence:

Fancy only allowed three people in the whole world to get close to her: Daddy, who was on death row; Madda, who was working the graveyard shift; and Kit, who was dead to the world in the bed next to hers. And so when she awoke to find a prowler hanging over her, violating her personal space, her first instinct was to jab her dream-diary pencil into his eye.

But even in the dark of night with a stranger in her room, Fancy wasn't one to behave rashly. Daddy had been rash, and now he was going to be killed. No, Fancy would be calm and think of a nonlethal way to teach the prowler why it was important not to disturb a young girl in her bed late at night.

Kit wakes up soon after Fancy and she doesn't have the same compunctions. She wants to kill the prowler immediately. After knocking him unconscious and dragging him to the cellar, where their serial-killer father sawed his victims, the girls argue about what to do with the prowler.

Fancy is terrified of losing Kit the way she lost her father to death row, so she promises that if Kit refrains from killing the prowler, Fancy will try to use her power to see distant places to show Kit their father.

Fancy has the ability to see things in transparent surfaces, and she uses a kinetoscope for that purpose. But although the kinetoscope shows the sisters Fancy's imaginary world, the Happy Place, they cannot catch a glimpse of their father.

Meanwhile, Kit has been slashing the intruder's skin in her anger and frustration. Afterward, Fancy stitches him up, but refuses his pleas for release. She doesn't want Kit to be taken away from her the way their father was.

Soon visits to the cellar for cutting and stitching the prowler's skin become routine to the girls, who even nickname the prowler Franken. Their sweet-natured, hardworking mother, whose name is Lynne but whom they call Madda, has no idea what her daughters are getting up to, and the girls fear that if she learns that they have graduated from dissecting animals to cutting on a human being, she will hate them.

When an old man tries to rape Kit, Kit kills her would-be rapist in what starts out as self-defense. But her sadistic urges – ones Fancy secretly shares – come to the fore, and Fancy is more worried than ever that she will lose Kit.

There are also two brothers, Gabriel and Ilan, who show an interest in Kit and Fancy, despite the fact that Kit and Fancy's father killed the brothers' dad. But the girls are contemptuous of the boys at first, or indeed of anyone outside their family. Fancy even refuses to speak to outsiders and lets Kit do all her talking for her. What began as a defense mechanism when so many people rejected them for being the Bonesaw Killer's daughters has become unhealthy, but the girls don't see this.

When Madda insists that Kit and Fancy have become too close, and signs them up for separate art and music summer classes, Fancy and Kit are chagrined. Meanwhile, there is the problem of Franken, who is developing a Stockholm Syndrome-like attachment to Kit. Fancy wants to get rid of him, but how can she do so without leaving evidence?

Fortunately, Juneteenth, a time when families go to Cherry Glade so teenagers can make a wish and ask the ghost of Cherry du Haven to grant it, is coming up. Fancy plans to ask never to be separated from Kit. But Fancy's visit to Cherry Glade has some unexpected consequences…

As mentioned before I loved Bleeding Violet and my expectations of Slice of Cherry were high. But while I admire a lot of the writing in Slice of Cherry, I feel much more ambivalent about this novel than I did about its predecessor.

The prose in Slice of Cherry is strong, as the two paragraphs I quoted above showed. You have a vivid way with descriptions. I loved metaphors like this one: "The sun floated just over the horizon, the sky streaked with red as though God had killed someone and hadn't bothered to clean it up."

The worldbuilding is unusual, and even though there is much less grounding in the mythology of Portero in this novel than there was in Bleeding Violet, I still enjoyed the wacky, disturbing goings on that popped up from the ground or in a reflective surface, sometimes when I least expected it.

My biggest reservation about this novel is the main characters. It's not that Kit and Fancy aren't well drawn, but rather that I didn't care for them very much, and as a result I didn't care about what happened to them that greatly, either.

I have a soft spot for flawed and morally ambiguous characters, so I don't think it was the girls' darkness per se that troubled me. Rather, I think it was their amorality. Their consciences seemed close to nonexistent at times. They didn't seem to have a strong sense of the value of a human life or much empathy, either. I think a character can be deeply flawed and still possess those qualities, and I kept hoping they would make an appearance in Kit and Fancy's emotional makeup.

The girls did grow into healthier (if not healthy) people – in fact, Slice of Cherry is the story of that growth process, of how Fancy and Kit learn to let other people into their lives, to contribute to society in their twisted way, and at the same time, to acknowledge who they are and discover that they can be accepted and even loved despite their flaws.

All of the above are themes I normally enjoy, but in this case, I just couldn't connect with Fancy and Kit. It wasn't until the last hundred pages that I started liking them. I understood that it was partly the rejection of the townspeople that had made Kit and Fancy so insular, but somehow I didn't feel their vulnerability the way I did Hanna's in Bleeding Violet. (Incidentally, Hanna and Wyatt's cameo appearance in this book was my favorite scene). Gabriel and Ilan appealed to me more, but I couldn't really understand Ilan's attraction to Fancy, who didn't even speak to him for over half the book.

Besides this, the book sometimes felt more like a series of vignettes stitched together (no pun intended!) when I would have preferrred more cohesiveness to the plot. I also wish there had been more dialogue tags because at times I had to reread to figure out which character a particular line belonged to.

It's tough to grade this book because although I couldn't warm to the characters, the writing itself was quite good, and I'm sure there are other readers the book would appeal to more than it did to me. Still, my own enjoyment was greatly hindered by my inability to sympathize with Kit and Fancy, and so, I think I'll give this one a C.