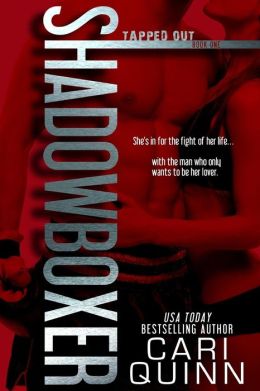 I bought this book at the bargain price of 99c and as of today, the book is still priced at that amount. Mia Anderson is an underground MMA fighter and she believes if she could get the current king of underground MMA fighters, Tray “Fox” Knox, she’d get a big payday that would allow her to start a new life with her baby sister in a city other than New York.

While I liked Mia, I struggled A LOT with the concept. Tray is a taller and stronger trained fighter who is on the top of his game. I’d have a better time believing it if Tray was the same size as Mia but her belief she could beat him because she was quicker than him just never rang true to me. Every time Mia brought it up, I just felt like it was a contrived pipe dream. Mia is described as “no match for [Tray’s] height of six-foot-three.”

Part of me was frustrated that Mia just didn’t buy a couple of bus tickets to a place that wasn’t so effing expensive and get a job waiting tables or bartending. That seemed more realistic than her desire to fight Tray.  Why wouldn’t she try to get the attention of a legitimate UFC trainer and try to beat the top woman on the tour instead of Tray? Oh sure, that’s a different story but this plot point that I was unable to run away from just wasn’t believable to me.

I did like Mia but sometimes she was overly prickly. Nearly every kind gesture of Tray’s is met with a slap in the face. For instance, when Tray suggests she meet his trainer, she responds with “Damn, it’s true.” I slowly shook my head. “I’ve heard rumors that sometimes sleeping with a guy makes them go batshit and think they own your vagina.” I understood that her reactions were fear based and that she was trying to protect herself but it was wearying over time.

Tray’s backstory, the disaffected rich boy, paled in comparison to Mia. Perhaps if Mia’s angst wasn’t as tragic, Tray’s would have a little more impact. Did he need a personal conflict other than he just liked to fight to place him in Mia’s circle? I wasn’t sure.  Tray’s really a nice guy despite the fact that he hides things from Mia. He doesn’t exactly see through Mia’s tough girl persona but rather keeps coming back for more because he’s so far gone for her. Sweetness counts for a lot with me in heroes.

The prose was quite nice and it was the writing that made me continue with the story even though Mia and the plot were problematic.

“I made the mistake of glancing down the hallway and sucked in a breath. A pair of doctors in scrubs walked toward the waiting room and the image brought back a flood of memories, none of them good. The walls seemed to swell and contract right along with my head.”

The other nice thing about this book is that it took unexpected turns. I was surprised by what happened in the story and I feel like it takes a lot to surprise me these days. C