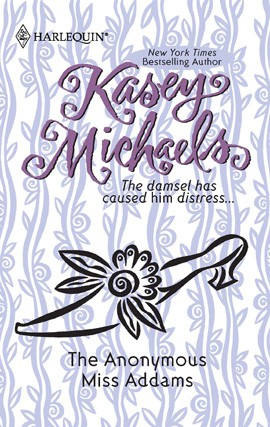 He was London’s most eligible–and outrageous–bachelor. But though Pierre Standish didn’t give a whit for polite society, he could not deny his father’s latest request. To prove himself a true gentleman, Pierre had to perform a random good deed. The task proved unimaginatively easy when, en route to London, Pierre came upon a damsel lying in the road. Her clothes bespoke her an urchin, but although his anonymous Miss Addams had lost her memory, Pierre was certain she was a well-bred lady. A lady whose innocence and plight might just ensnare the ton’s most unattainable rogue.

Years ago I read and enjoyed some of your early trad regencies and remember them as being funny and light reading. When I was smack in the middle of a longer, non-fiction, war torn story, I needed a break, a breather, something to lighten my spirits before plunging back into world war. Ha! I thought. I got a number of Kasey Michaels’ older trad regencies a while ago when I saw them for sale at eHarlequin. That’s the ticket.

The intriguing intro bit got things off to an good start – what’s going on here, who are these people talking so calmly about killing and what’s the relationship of these two? I quickly flipped the page, eager to discover the answers.

Then opening chapter drops like a brick. What is this? Is this lengthy scene about this book? No, obviously it’s explaining something from the past so why have it here? It seems that it’s one huge info dump about another book’s events. The whole time I’m plowing through it, in the back of my mind I’m hearing the mechanical voice intoning “stall, stall, stall” and the sounds of the plane going down.

Thankfully the engine then sputtered back to life and this one got cranking with an interesting set up of the hero Pierre being admonished by his father to accomplish two Good Deeds. As he’s headed back to London, the opportunity to achieve them quickly arrives when Pierre saves an apprenticed chimney sweep from an oppressive master and finds an unconscious young woman in the middle of the road.

Lots of fast paced dialog followed. I enjoyed the valet Duval and Pierre’s repartee. I was not so enamored of the sweep Holloway’s cant but then too much cant usually does me in, even in a Heyer novel. Caroline is a plucky heroine who verbally gives as good as she gets. She doesn’t ever let Pierre off the hook that way and I liked their linguistic battles.

The mystery of who Those People from the intro are and what they are up to isn’t bad. The battle royale between Caroline and Pierre is great fun. At this point my impression was that they’re evenly matched, meant for each other and they’ll have a lifetime of pitched volleys ahead of them. I was even okay with the amnesia plot which usually sends me screaming.

Unfortunately then the book faltered a bit later as the truth begins to be revealed and after another nod to a past book dumps more returning characters in the mix. This is when I got annoyed and wanted to slap the smug off Pierre and his father for all the reasons the ladies blow up at them for. Even with both women practically imploring them to tell who amnesiac Caroline is, they’re too clever for their own britches. Men! But then Pierre goes into morose self flagellation mode over not telling Caroline about the danger she was in. At this point I do agree with his father in snapping him out of it. Then I had to remind myself that he’s had a lifetime of self satisfaction ingrained in him so what could I expect.

The final resolution of the mystery is tongue-in-cheek fun and I do approve of the way Pierre handles the whole drama but by this time, his high handedness earlier had left it’s mark on my opinion of the whole. I finished the book hoping that Caroline gives him daily grief and brings him down a peg. Or two. C+