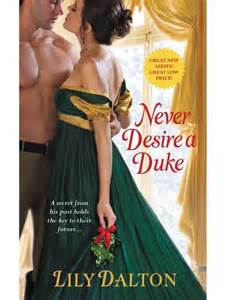 I believe I’ve mentioned that this year has been rough for me, historical-romance-wise. Historicals remain my first romance love, though, so I return to the sub-genre like the swallows to San Juan Capistrano (or possibly like lemmings to a cliff). Anyway, someone somewhere mentioned that Never Desire a Duke had positive buzz prior to its release, so I thought I’d give it a try.

The story opens on a marriage breaking apart: Vane Barwick, the Duke of Claxton (is it just me or is that name a mouthful? historical romance names and titles are starting to read more and more like Madlibs to me) arrives home to find his young wife Sophia miscarrying. As if that weren’t distressing enough, he quickly discovers that she wants nothing to do with him; her miscarriage was apparently brought on by a fall she suffered fleeing the house after uncovering a salacious note from an ex-mistress of his. They are both heartbroken about the loss of the baby, Vane feels guilty and Sophia is angry.

Cut to about a year later – it’s almost Christmas time and Sophia is nestled in the bosom of her loving family. She and Vane have been estranged ever since the miscarriage, and he has in fact been traveling on diplomatic missions for the better part of that time. Sophia has somewhat gotten over her initial shock and hurt about the dirty letter – it was from an EX-mistress, after all. But now she is freshly devastated by the fact that her husband has ignored her for months and essentially run away to the continent rather than deal with their issues (note, though, that there’s no evidence Sophia made any overtures to talk, either). Also, she’s heard rumblings and rumors about the female company he’s keeping these days, and she is not happy about it.

At a party in honor of her beloved grandfather, Sophia first runs into a very presumptuous noblewoman, Lady Meltenbourne, who inquires about the duke’s whereabouts in a most impertinent manner, informing Sophia of something that she is apparently the last to know: Vane is back in London. Just like that, he shows up at the party. The two have an aborted confrontation, and Sophia flees to Camellia House, Vane’s childhood home located in a village near London. She’s had the house prepared expecting that she might go there after Christmas, to contemplate the next steps in her marriage and perhaps write Vane a letter suggesting that they reunite for the purposes of having a child and then separate.

The conceit of the isolated house felt like just that – a conceit. All the more so when a major snowstorm hits and Sophia (and of course, Vane, who has followed her to Camellia House) are stranded there alone. Or more or less alone – Vane’s scapegrace brother shows up with Lady Meltenbourne, and then Lord Meltenbourne shows up, out for Vane’s blood (a circumstance that doesn’t improve Sophia’s opinion of her husband’s fidelity).

The others are packed off to the village and the relative isolation does what it’s supposed to do – bring Vane and Sophia together so they can fight, almost have sex, and then fight some more, and Sophia can learn all about why Vane’s so tortured.

As it turns out, Vane is tortured for the usual reasons; what it pretty much boils down to is, he had a crappy father. I felt for him, I guess, but somehow maybe less than I was supposed to.

Vane and Sophia also go on a quest of sorts, a kind of scavenger hunt of the kind his mother used to devise for Vane and his brother when they were children. Vane participates reluctantly, mostly because Sophia wants to. As it turns out, this quest is a very special one designed by his mother to reveal some truths that Vane needs to hear. How his long-dead mother knew that Vane would grow up to need just these lessons and why she picked such a complicated, unlikely-to-succeed method to teach them were both mysteries to me.

If I haven’t made it clear, I didn’t like Never Desire a Duke all that much. I didn’t really dislike it, either. The plot had potential but the characters and writing were blah for me. I know I’m supposed to care about Vane and his inability to be open about his feelings and about Sophia and the pain she’s suffered, but I just wasn’t that interested. I’ve read it all before and this book didn’t really bring anything new to the table in terms of characterization.

Writing this review has crystallized for me that one of my problems with the book was Sophia: I found her pretty annoying. She’s led this charmed life, marries someone whom she thinks is a great guy, and at the first adversity she pretty much loses it. At times it felt like she just kept finding new things to be mad at Vane about. First it’s “causing” the miscarriage and then it’s the way he ran away. When they’re reunited at the party she flees from him but then blames him for not pursuing her; obviously he doesn’t care enough to do so, and he’s probably off with some other woman, she thinks. This makes Sophia appear to be fairly immature and her suffering shallow.

Also, early on, Sophia nags Vane into writing a list of all the women he’s slept with that she might know or encounter in society. Now, clearly this is a terrible idea, but she insists on it and Vane capitulates. She then spends most of the rest of the book carrying around the list against her heart, seemingly believing that this will protect her from getting hurt again. It’s like she wants to have a reason to be angry at him.

It didn’t help that I felt like Sophia’s “goodness” was oversold at times. We get it: she helps widows and orphans and she just loves everyone and is the nicest nice who ever niced. Even when being told about Vane’s horrible father and how horrible he was, she is just aghast to find that he was sent to sea as a child, even though she acknowledges that it was fairly common at the time.

I didn’t love Vane but at least I felt he was trying; there were times when I thought he could bend a little more but he did have a background that explained his limitations.

The prose was serviceable but there were a few rough patches; I sometimes had POV confusion because it would switch in the middle of the scene with no break or other indication that we were now getting, say, Vane’s POV as opposed to Sophia’s. I noted a few anachronisms, as when Vane replies testily to something Sophia says with a careless “Whatever.” Also, Sophia’s reaction to orgasm surely belongs in the Pantheon of Purple Prose:

Her heart stopped beating – certainly it did – and she glimpsed a paradise created of violet and velvet and stars.

I don’t know if they had neurologists in 19th century England, but if I was her, I’d get that checked out. I think she may have had a minor stroke.

Sophia has a real TSTL moment near the end when she decides that Vane can’t forgive her for something and she runs away. I was out of patience with her at that point. To quote Vane, “Whatever.” My grade for Never Desire a Duke is a C.