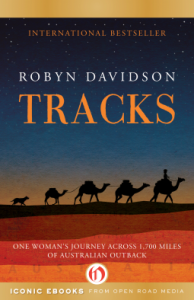 I arrived in the Alice at five a.m. with a dog, six dollars and a small suitcase full of inappropriate clothes. . . . There are some moments in life that are like pivots around which your existence turns.

For Robyn Davidson, one of these moments comes at age twenty-seven in Alice Springs, a dodgy town at the frontier of the vast Australian desert. Davidson is intent on walking the 1,700 miles of desolate landscape between Alice Springs and the Indian Ocean, a personal pilgrimage with her dog—and four camels. Tracks is the beautifully written, compelling true story of the author’s journey and the love/hate relationships she develops along the way: with the Red Centre of Australia; with aboriginal culture; with a handsome photographer; and especially with her lovable and cranky camels, Bub, Dookie, Goliath, and Zeleika.

The book cover and the opening line are what hooked me on reading this book. And they about say it all. The cover might be a bit misleading in that Davidson usually walked alongside her camels rather than riding one of them and they were probably not as stair step perfect in size but still the cover conveys desert journey with camels and dog. The line pretty much shows both the humor inherent in Davidson’s writing and the fact that frankly she was in no way ready for this trip when she started. Or for that matter, for a long time into the preparations.

I quickly realized that amide the chuckles there would be a lot of grim information about the Australia of 1977 – and maybe of Australia today though I sincerely hope things have changed and from what’s written in the epilogue, it seems this might be the case. Rampant misogyny, alcoholism and racism – and sometimes all 3 at once – were alive and well in Alice Springs then.

Camel handling seems to be an art crossed with a strong arm and not something I’d be looking to take up any time soon but good onya for deciding to make the dream come true. I read with fascination and horror all that’s involved with getting a trained camel to do what you want and trying to train a newbie to do the same. Not my cuppa. I can see this taking a good long while to learn and become confident with but when it’s mentioned that it’s been two years since she arrived there, I thought, “Lady it’s time to either go or get off the pot.”

And when, from what was written, she appeared to be reinventing the camel wheel, I had to wonder, “Why?” This wasn’t rocket science. This wasn’t inventing how to get to the moon. People had been saddling up camels and loading them with pack supplies for 1000s of years. Why is she seemingly contriving her own camel tack and saddles? Shed been working with 2 people for 2 years now – one an Afghani camel herder for chrissakes. I kept wondering why can’t she just look at their tack and saddles and copy them?

Then when she went to meet with National Geographic people about sponsoring the trip and she admitted to us the readers that she hadn’t plotted a route yet. I think the words “you’ve got to be fucking me” crossed my lips. Talk about babe in the desert woods. At this point, I sat down with grim determination to see this adventure, via the book, through. She was like watching a toddler walk around with a loaded gun. Would she avoid killing/injuring herself and any more animals under her care before it was all said and done?

We then started the second third of the story and the change in her was almost night and day. Now that the journey has begun, she’s almost … competent. Much more in control and less hysterical than before even though the opening stages of the journey are even more of a learning experience. What items are needed and what she should have jettisoned before even starting? What’s the best way to pack the gear and distribute the weight? The coming days pared down not only the baggage but Davidson and this is where the book gets wonderful.

In the beginning, she was often among other people: tourists, the National Geographic camera man, rangers and Aborigines. Some of them were helpful, some annoying and some transformed her. Her time with Eddie, the elder Aborigine gentleman was illuminating and from him she began to see Australia as they always have. To slip into an almost dreamlike state of existing and coexisting. But this part also kept hammering home how much colonization has almost destroyed them.

Her description of her relationship with Rick, the camera man, came to annoy me. A friend of hers points out that without his advice to seek out National Geographic’s sponsorship, her trip might not have happened. But along with the money comes the stings and while I can see that, based on her original hopes for what the journey would be for her, having him tag along and document it in pictures utterly altered things, her whingeing got on my nerves. To answer her own question, yes she got too precious about it. He was only part of the snakes in her Eden and it was never going to be as pristine as she imagined. Maybe that’s my middle age speaking to her youthful 70s idealism but get over it.

We quickly see how dependent she is on the camels and their health. But while she takes good care of them, she totally falls down on the job in another quarter. She gives fair warning of what is going to happen, right before it happens, but I was sick at heart to read what befalls one member of their little party – especially since it could have been avoided. So while the opening line makes this sound like it could be fun to read, the reality is that this was anything but a breezy jaunt across Australia.

As I was reading the final third of the book, I kept thinking that this trip was a product of its era. That it probably couldn’t be done or repeated today and the epilogue confirmed this. Regulations and the modern thirst for publicity and fame would either condemn it or the person trying it for attempting to stay below the radar – to keep a tiny bit of privacy and have the journey, external and internal, remain their own. With the internet and GPS the prep and actual travel would be inevitably changed – maybe for the better but changed all the same.

Overall, I enjoyed the journey though the prep sounded like hell at times. I hated to see the privacy and ownership of the trip drift out of her hands, hated to see her get upset about this, hated to see the worst aspects of it too. But the trip is an interesting thing to read about and see how it all came together and, in some places, fell apart. I’m basically an armchair adventuress so I’ll leave such things to others to do and the reading of them for me. B