Initially I wondered whether I should have sent this book to Jayne. She’s not much of a fan of the menage, but she does love the period. The best thing about the book is not the sex or the period but the almost gothic like atmosphere of the story. It is told entirely from Alba’s point of view, an often dreamy not quite of this world point of view. 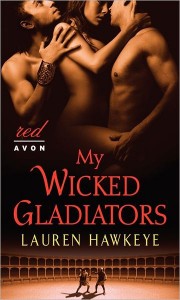 Alba is a member of the wealthy merchant class in Rome whose husband, Lucius, owns a gladiator school. The time period of the book must be circa 73 BCE as there are references to Spartacus in the novel. Alba lives a life of wealth and leisure but is dissatisfied, although she chastises herself for feeling such. Her husband no longer visits her regularly, primarily because she was barren. But he did not mistreat her nor did he ban her from taking her pleasure elsewhere. Alba is portrayed as rich and lonely, but naive and almost innocent. The latter characterization was inconsistent with her lifestyle and another unfortunate pass at representing a certain hierarchy of women based on their sexual morality.

Alba, despite having had both female and male lovers, self castigates for having feelings of lust for the gladiators that fight for her husband. “What kind of domina was I, imagining myself seducing a slave?” Alba asks herself. Not a page later, she recounts that her maidservant Drusilla and her had enjoyed a dalliance when they were younger but now only engaged in that act for the benefit of her husband.

When Lucius decrees that Alba must have a child in order to satisfy a wealthy patron who believes that men with large families make the best business partners, Lucius requests that Alba have sex with another man.  A doctor determines that the barrenness must be Lucius’ fault and he accepts this, deciding that Alba will be impregnated by their slaves.  How convenient for Alba it is two of the gladiators after whom she lusts!

Despite all the time we spend in Alba’s head, she doesn’t come off as a deep character nor one with any maturity.  She is taken aback, for example, by the overt lasciviousness a wealthy widow displays toward Alba’s gladiators.  She allows a manservant to take a position of power and almost dominance in her household.  It seems as if Alba simply floats through life, being dressed by her servant, bathed by her servant, being serviced by her gladiators.  At some point, she does show a spark of interest in the widow’s freedom but rarely tries to exert power in her own home despite being educated enough to read the business books kept by Lucius.

When I reflect back on the book, I think of Alba constantly trembling, her desires and life choices always a hairsbreadth from being taken from her.  Whether we were to take from this that women were seriously repressed and under the thumb of their husbands in Ancient Rome or whether that was simply Alba’s personality, I wasn’t sure.

We also get little insight into the gladiator lifestyle.  We know only that they serve at the whim of their owners and that they could win or buy freedom. Some were slaves and others took up the position of gladiator for lack of any other possible avenue.  The biggest question remains unanswered.  Why do the two top gladiators at Alba’s school desire her, particularly when the two have feelings for each other.

The story was written around the time of the Spartacus revolt and references regarding Spartacus were made but the exploration of this important political event was superficial, almost hesitant.  There were elements I liked – the ominous gothic feel and the setting of Ancient Rome.  I felt that the story didn’t live up to the promise. C