REVIEW: Rescue Me by Rachel Gibson

She’s 33, unmarried, and stuffed into a Bubble Yum pink bridesmaid dress. And the whole town wants to fix her up with anyone with a dental plan…

Everyone in Lovett, Texas knows Sadie has always been a ‘notional’ kind of gal. She got a notion to leave town asap , and never visit her daddy (bless his heart). Now, she’s back and got the notion to invite a good-looking, hard-muscled, total stranger to her cousin’s wedding. Better a stranger than some of the losers she’s dated.

Vince Haven got his muscles the hard way—as a Navy SEAL in Afghanistan. He’s staying in Lovett to visit his crazy aunt—the proprietor of the local Gas N Go. Before he can get the heck back out of the small town, his aunt makes him an offer he can’t refuse. Maybe he’ll stick around Lovett for a while. Maybe he’ll make a ‘go’ of the Gas N Go. Maybe he’ll rescue Sadie out of that pink dress!

“Rescue Me” is a slow Southern style romance. Great intro of the two with Sadie bluffing a stun gun and telling a friend all of Vince’s personal info. She impresses him and me with her smarts. Vince and Sadie don’t spent their time lusting, lusting, lusting – instead they head straight for the action and manage to keep their relationship as FWB which slowly slips into more. Nice, easy. The way the book is set up might annoy some readers in that there are portions of every chapter where Vince and Sadie don’t endlessly lust after each other or even constantly think of each other but instead – amazingly! – they get on with their (at this point) separate lives. Sadie deals with her father’s injury and recovery and Vince begins work on the renovation of the Gas and Go. Imagine, two protagonists who aren’t mindless puddles of drool as they only fantasize about body parts and boinking. I found it refreshing. 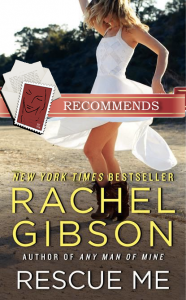 But the book also manages to be hot – sinfully hot. Sadie and Vince are both adults who’ve had physical relationships and don’t go all coy. They know what they want and when they get a chance, they get right down to it. It’s direct, it’s done well and it got my motors revved. I also appreciated that there were no regretful mornings after. At one point Sadie mentions they’re about to make bad decisions do things they might regret in the morning but thank God they never do. Regret them, I mean.

That being said, the “ILY” realization and declarations were a long damn time in coming. I don’t like books which drag on too much after everything is settled but this one literally took until the final pages before both of them were romantically on the same page. Still, I felt that both Sadie and Vince reacted realistically based on how you’d written their characters. Neither one shows emotion very easily and it takes a lot, in Sadie’s case a life changing event and for Vince a visit to his sister and assholic BIL who spouts some – bizarrely emo – words of wisdom which make me wonder if he’s going all soft and girly, to break their emotions loose and let them out.

Angst is certainly there but both are the type to keep things inside rather than cry in front of others or let it all hang out. They have to be rescued from that, from the closed in lives they were living, from the expectations of others who don’t really know them. They also need rescuing from their own feelings of self doubt and regret. Sadie always wanted to please her mother in pageant competitions and then her father in ranch stuff but never quite managed either. It’s not that her mother was mad at her but rather that since she died when Sadie was so young, Sadie never had the chance to excel at something for her mother. And only too late, Sadie gets an inkling of how little chance her father had to be a loving father to her based on his own messed up raising. She feels she was never what either parent wanted – a pageant winner or a boy to inherit the ranch. Never quite what either parent was looking for in her. And then there’s the expectations of the people of Lovett about her and the ranch. And the gossip.

I love how Sadie faces down everyone who wants to question and quiz her about her life – in the town, at the wedding with her deaf aunts shouting all her business to the reception, Sadie sucks it up, deflects when she can and acts like she was raised right.

The SEAL stuff isn’t so much in your face – My hero is a SEAL! since Vince is off the teams now. The weapons stuff sounds cool and probably correct but it doesn’t take over the story. Vince thinks about these things because they were a part of him for so long and are deeply ingrained but I never got annoyed that SEAL worship was taking over the book or that it made Vince just a cardboard cutout caricature of a man. All this stuff also serves to set up Vince’s “Rescue Me” issues which is the PTSD he refuses to acknowledge and which scares him more than any insurgents ever did. Big tough men don’t quake from dreams .Vince hates his BIL to be – and it’s totally believable how he never mentions Sam’s name to Sadie, never boasts of his famous BIL, just calls Sam a SOB. Vince’s personal issues relate to the death of his best friend and Vince’s feelings of guilt and anger and loss of his place on the team due to his damaged hearing.

All the Texas stuff might be over the top but I enjoyed it and laughed in appreciation. The hair – poofed please and never flat – the clothes, the language, the food, the descriptions of the lovely Texas evening skies – I like it all. Could be overkill, though, for those who prefer skyscrapers and smog.

Call me crazy but I like that Sadie doesn’t suddenly discover a love of the ranch. She still hates cows and wants to get rid of the Texas Cow Traditional style of decorating at the ranch house. What she finds is a love of the place and a love of the business … but still not cows. She also will always have unresolved issues with her father – there’s no Hollywood happy ending there but something that mirrors how life sometimes is. I was also slightly surprised that the issues of Vince’s father weren’t explored but instead you just use this to paint some more brushstrokes of his personality and past life without trying to force anything into a neat little box with a bow at the end.

You’ve ended the book on sort of a cliff hanger. What happened 28 years ago and how is Sadie going to find out and what will happen when she does? I think I can guess who will be the next hero but I will look forward to it, him and another trip to Lovett, Texas. B