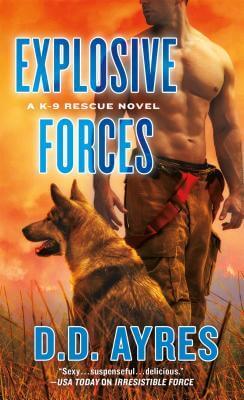 I wanted to like Explosive Forces much more than I actually did.  Unfortunately, I didn’t buy one of the book’s central arguments and the romance was a little fast. (It does end in a HFN which was more fitting for the characters so it didn’t end up being quite as fast as I’d initially feared.)

Carly Harrington-Reese is a Texas-born African American former model who has returned to her Fort Worth home to make a new start. She had been married to a fashion photographer who died of a drug overdose. She has turned away from her fashion career and is trying to reinvent herself. She is about to open her boutique, “Flawless”, a shop which will sell one-off pieces of art, jewellery, fashion and home decor items created by women artists and artisans. The night before Flawless is due to have its grand opening, she hears the sound of a dog whining in the vacant shop next door and goes to investigate. She finds there, a German shepherd with his leash tied around a pole and an unconscious man who smells of drink. Suddenly a fire breaks out in the shop and Carly, unable to leave the man there to die, is in a desperate race to save him and the dog from the fire.

While Carly initially assumes the man in the shop is a drunk and/or a vagrant, he is actually arson investigator, Noah Glover. Noah has been roofied and left to die in a fire set up to look like a suicide. A text message from his phone was sent to all his colleagues as a kind of suicide note and there are other things which lead fire investigators to believe Noah is responsible for what happened in the shop. Except it didn’t look remotely convincing to me. I didn’t buy that he would actually be a serious suspect. The set up looked too clumsy. Noah is a single dad, devoted to his four year old son Andy and has an unblemished record with the Fort Worth Fire Department and before then, the Fort Worth Police Department. The arson investigator assigned to the case is Noah’s former mentor. But Noah is treated like a criminal from the beginning and it just didn’t make sense to me.  While other evidence later comes to light which seems more compelling there is one (in particular) piece of evidence which screams there is more going on and that the investigator discounted it very early on puzzled me. It seemed the plot required that Noah be a suspect but the narrative to make it look like it was a reasonable conclusion wasn’t there. At least, not to me.

Because I didn’t buy that Noah ought to have been a suspect, I spent most of the book feeling like the FWFD and FWPD were incompetent fools and rolling my eyes.  The villain was a caricature and I found his behaviour extremely erratic – which made me wonder just how he had got away with his crimes for so long. I expected more red herrings than there were in terms of who-actually-dunnit and, generally, found the suspense plot underwhelming.

The timeframe of the story was fairly short and the romance developed against the background of a time-sensitive arson investigation so it wasn’t the case that Carly and Noah had a great deal of leisure to get to know one another and build a relationship. They didn’t do anything stupid (like having sex when bullets were flying for example), for which I was grateful, but it was still a little thin for me. It’s not that I couldn’t see what was growing/could grow between them. It was that it was too quick and too pressure-cooker for me to really trust it yet. However, the ending did save the romance thread for me because it didn’t go full-HEA. Rather, the book has an optimistic HFN.


There is a little bit of Harley POV (he’s the dog), which I mostly liked but the transition from Noah’s POV to Harley’s POV and back to Noah’s were unclear and I was a little confused exactly when they shifted.

It wasn’t all bad. I liked Noah and Carly well enough and I liked Harley (of course). Carly’s business was all about empowering women to make money from their art and showcasing female artisans. I liked Carly’s aunt, the juvenile court judge, and Carly’s cousin, Jarius, was funny and kind of charming, kind of a dawg. I liked the diverse representation of ethnicity and ability. They sat well within the book, enhancing the story and not demanding diversity cookies.

The intimate scenes clearly showed the chemistry between Noah and Carly and there were also some word pictures I particularly liked.

Noah watched Carly cross the pharmacy parking lot toward his truck. She wore skintight jeans that showed off miles of leg and cupped her butt like a territorial boyfriend.

There was one thing which confused me. Maybe readers can chime in here. Carly’s hair is described thus:

Her two-tone hairdo was new enough that she paused to study it. A riot of tight blonde-tipped ringlets cascaded over her brow from the crown. The naturally darker sides of her hair had been swept back and pinned to mimic the look of being cropped very close. It was an edgy urban look that turned heads on the streets of Fort Worth.

Noah refers to her hair as “Happy Hair” a couple of times in the book. I Googled it but, apart from a brand of hair extensions (which it didn’t seem likely that Noah would know) I came up empty. Is “Happy Hair” the name of the hairstyle?

I read an early copy which was heavy on errors – I’m hoping they will be corrected by release day. It is possible that some of the head-hopping I noted during the read will be corrected as well. Some of the errors changed the tone of the story quite a bit – I think the book will be a lot smoother without them but I can only grade on what I read.  Grade: C

→ Kaetrin
Previous article: REVIEW: A Little Luck, A Lot of Fate by Linn B. Halton
Next Post: REVIEW: The Tale of the Dancing Slaughter Horse by Victoria Shade