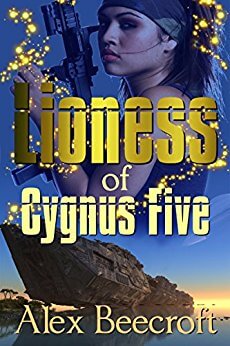 I have to admit that I was a little bit taken aback when I stumbled upon your new book, because it seemed to have an m/f romantic storyline.  I certainly do not mind reading an m/f story from you, but I was curious about whether you had switched to m/f romance permanently and went to check out your blog. Apparently you have been wanting to write an SF trilogy with queer people saving the world and romance present but as a secondary storyline (I’m paraphrasing, but I believe I got the gist of it correctly).  And I said to myself – sign me up – because this sounded like just my cup of tea. Apparently in the next two books we will follow a lesbian couple (I am sure I know one part of the couple already) and an asexual homoromantic couple (I think I know who one of the guys is, but I have no idea who his love interest is/ will be).

Aurora’s ship transports convicts in space (although for me the imagery invoked one of those historical fiction books where convicts are transported somewhere by sea).  We are reminded very quickly that this is science fiction because of what Bryant does to take control of the ship and rescue himself. Let us just say that he is coming from a society with a very high level of technology, where people can change their appearances and modify their abilities. It also has a highly invasive government which can kill its citizens at any time because they are injected something government-controlled almost at birth (either at birth or very early in life).

Bryant happens to be very skilled with machinery of all kinds, and he does not see much harm in bending people to his will when it will help his survival. He achieves a lot of what he sets out to do, but not his main goal – because as the blurb tells you, outside forces rudely interrupt his plans. After the crash, when the passengers are not sure at first who survived and who did not, he ends up together with the commander of his former jailers, Aurora Campos, a former brilliant soldier and commander of her world, but who is now disgraced and has a job transporting prisoners.

“She was an odd looking woman, somewhere between olive skinned beauty and prize-fighting troll. Past the first bloom of her youth – if she ever had one – she was well into hard-bitten military middle age. He’d heard of her, of course. Who hadn’t?”

As an aside, to the best of my understanding Aurora comes from a society of modern crusaders, I guess? We will bring God’s glory to the unbelievers and if we have to completely subjugate or kill them, oh well.

In Aurora’s society, (once again, to the best of my understanding, because I suspect that the world will be more fleshed out in the next two books), the technological advances that Bryant used to have at his fingertips seem not to be accessible to most people, only to the techs.  However, they do have space ships, so I don’t think they are completely unfamiliar with the technology. Aurora at some point describes most people at her planet as big families farming together.  Aurora is a Christian, which I suppose means that Christianity was a dominant religion in the Kingdom (they again reminded me of Crusaders, bringing everybody under God’s Kingdom). I really liked Aurora; she seemed competent and deadly, but also seemed to be very honorable and sometimes even kind.  More importantly, when faced with facts that challenged her preconceptions about how her society did things, she was not afraid to reexamine those preconceptions and sometimes even change her opinions. She definitely grew as a character throughout the book.

I thought that Bryant experienced the character growth too, and I was glad for that because to be quite honest my first reaction when I “met” him was not good.  And his standing did not improve after a couple of stunts he pulled in the middle of the book, but I did recognize a clear potential for redemption and kept reading. I am not lowering the grade just because Bryant was an ass several times – his character arc made complete sense to me. And this is not a pure romance, but rather science fiction with romantic elements, so I am less inclined to expect likeable characters here than in a book which fully belongs in genre Romance. But I did think that Bryant ended up much more likeable than he began and I enjoy when I get to watch a character change over the course of a book.

The action was really good; the book was fast moving from the very beginning, but it was not so fast that reader could not catch a single breath. I thought it was paced really well. What can I say without spoilers? Well, they fight a lot and eventually find themselves a place to live which will still need to be defended from even more powerful aggression. ;-). While Bryant and Aurora seem to be pretty solid, their overall story is by no means complete.

I always tell readers that I do not feel qualified to comment much on the writing style, but I want to say this. I have read most of Alex Beecroft’s books over the years and while I enjoyed her writing in this story as much as ever, it seemed quite different to me here than in many of her other works. I guess it felt less flowery? And when I describe her writing as flowery, I truly do not mean to be anything less than complimentary. I guess I should say it felt a bit less descriptive than usual.