I picked up your novella, Deep Desires, after Mandi at Smexy Books recommended it. Mandi was very enthusiastic about this book, and it sounded different, so even though I hadn’t read any of your previous works, I went for it. 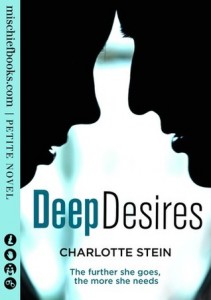 Abbie, the narrator of the story, is a survivor of an abusive relationship. She is living in an apartment complex called The Courtyard and working at a grocery store partly in order to keep a low profile. She is afraid of getting into another relationship because the last one turned out so badly.

She doesn’t believe the neighbor knows she watched him, but she is still troubled by her action when she sees him collect his mail one day. Another neighbor has nicknamed him “The Serial Killer,” because he is a loner and little is known about him.

She learns the man’s name, Ivan Orlinsky, from his mailbox. And in her own mailbox, she finds a package from him. It is a puzzle box containing an ingenious sex toy. Abbie knows Ivan could, indeed, be dangerous, but he always makes her feel she has a choice about how far to go, and since they don’t share the same space except when they briefly pass each other by in the hallway, she feels safe exploring her sexuality with him.

The trouble is that in some ways, Ivan feels more vulnerable than Abbie. In addition to having OCD tendencies, he is also afraid to leave his apartment – or even to let Abbie into it. Can these two damaged people heal each other?

Deep Desires is a hot and emotional read but in some ways, it was tough to suspend my disbelief in this story. I didn’t, for example, understand why Abbie felt safe watching Ivan when he masturbated in front of his window. It takes some suspension of disbelief to buy that she, an abuse survivor, would not feel more uncomfortable with his weirdness when I sometimes did.

At the same time, I wondered what attracted Ivan to Abbie, beyond the damage they had both sustained. It isn’t clear since he has so little opportunity to know her when the attraction begins.

Deep Desires is definitely steamy – and I liked Abbie and wanted to like Ivan. They were both characters with some complexity and did not fit the usual hero/heroine types. I think they would have been more real to me had I seen more of their lives, more of their story.

Instead, the novella was limited to the apartment complex. For me, the characters’ worlds needed to be expanded, and questions about them needed answering. Was it just the history of abuse that led Abbie to work as a supermarket cashier? Could she afford her apartment on those wages or was she struggling financially? And what about Ivan? Did he ever leave his apartment to run errands, or were the things he needed always delivered to him?

When Ivan and Abbie declare their love for each other, I didn’t buy it. The novella was sexy, even haunting, in its depiction of their attraction to each other and their need for each other. I could buy that they filled each other’s empty spaces to some degree, but not that this was necessarily a healthy attraction or genuine love.

I say this because outside of one briefly summarized phone conversation about poetry and the dramatic final scene, I never saw them spend any time with one another that wasn’t sexual, and I don’t equate sex with love.

[spoiler]Also, I didn’t understand what happened to the villain at the end of the story.[/spoiler]

If only for the haunting attraction, moody atmosphere, and hot sex, this novella was worth my time. But because of its flaws, I can’t see myself rereading it. C.