Despite many accolades and even your engaging excerpt posted here at Dear Author at the recommendation of a fellow reader, I balked at reading a book about poetry. But after reading every traditional publishing acquired self published, Slammed remained a nagging omission. An unchecked item on a to do list. A hanging fingernail. Finally, I broke down. 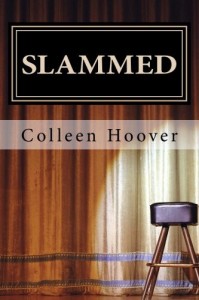 I realized that I had purchased these books a while back at the not very expensive price of $3.99. I’m not sure how much has been changed in the traditionally published version but I would hope the many grammatical errors and awkward sentences were cleaned up. These days, though, it is hard to tell what is an error and what is “authorial style.”

Layken and her family move from their home in the south to Michigan after the sudden death of Layken’s father. Layken meets a cute boy next door named Will. They connect immediately and Layken is finally feeling optimistic about her life despite all the past tragedy. Will even has a younger brother that is the same age at Layken’s younger brother. Unfortunately, Layken and Will’s burgeoning romance takes a header when an ethical situation supposedly prevents them from being together. I use the qualifier supposedly because they are together quite a bit even though they shouldn’t be.

Let’s get the poetry out of the way. It’s not that I don’t love poetry, but it’s that I find it hard to appreciate newer poets. And every other romance book I’ve ever read with poetry has been terrible. (I was unable to read Susan Donovan after her one contemporary containing the heroine putting her love for the hero’s penis into verse, un-ironically using “sausage” in the rhyme) The slam poetry in this book is more 8 Mile angry rap than platitudes praising the flowers or bonny Scotland (and make no mistake I love Burns and I love Burns as quoted by Johnny Harris to his former schoolteacher in One Summer by Karen Robards). Plus, even if a reader doesn’t like poetry, the primary text is long form narrative.

Each paragraph begins with a reference to an Avett Brother song and rather than adding a layer of poignancy or meaning, I thought it detracted because this was a story of young poets and how they used words to express their emotions. I would have rather had the epigraphs be poetry of perhaps Will or another character than introducing this band’s lyrics into the story at the beginning of each chapter and then into the story itself.

The conflict might be an insurmountable barrier for some but because of the relative age of the characters, it was workable. Was it believable? I’m not sure.

[spoiler]The conflict is that Will is Lake’s teacher at school.  He had to take the job because his parents died and he was left to support his younger brother. Will and Lake don’t figure this out until she actually starts school. How many schools can afford a special elective in poetry? Apparently Layken’s new school.[/spoiler]

The main drawback didn’t end up being the first person present tense, the poetry, or the conflict but the repeated use of death to evoke emotion. Having characters recovering from death or facing death presents an emotionally fraught situation. Using it repeatedly removes the emotional impact. Granted, Layken and Will can’t be in the situation they are in unless they are nearly unmoored but it drew away from the realism of the story. It is angsty and captures the spirit of the New Adult period well.  I stayed up late reading it and drew a new appreciation for slam poetry which is pretty amazing in and of itself. B-