JaneC ReviewsErotic-Romance / FantasyComments Off on REVIEW: Chains of Revenge by Keziah Hill 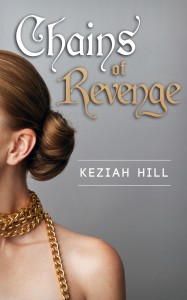 When Escape Publishing launched, each of the launch titles were $.99 so, of course, I bought all of them.  After my great success with Grease Monkey Jive, I couldn’t wait to see what else was in store for me.  Chains of Revenge had an evocative cover and I recognized your name as a regular commenter in the romance blogosphere. It appears that this title, along with Grease Monkey Jive, was self published initially.

The story opens strong.  Catiscal, a warrior and prince of a neighboring country, has been captured and forced to work as a slave in Lissa, Princess of Horvald’s country.  Lissa has Catiscal removed from the mines to come and service her sexually (in a scene reminiscent of Charlton Heston picked from the masses of slaves to come to the palace).  We know few things about Lissa’s country other than they capture others to serve as slaves and they are more sexually open than in Catiscal’s country.

Lissa is a virgin and is preparing to be married but first she must experience and be trained in the sexual arts.  Why she chooses a slave and not someone from her own country’s class is not explained.  This is the real crux of the problem in Chains of Revenge.  We do not know enough about anything to justify or understand the motivations behind the actions.  Why would Lissa choose a dirty slave from a country known for its sexual repression when there must be scores of men who are more adept at providing an inexperienced woman pleasure?

They begin to enjoy each other and he begins to challenge her idea of slave ownership. But then something massive happens and she becomes the slave and he the captor. He’s furious for what he deems to be a betrayal although I didn’t have any idea as to why he thought she could have prevented what happened to her. Instead of allowing the ache of loss to linger, however, we speed along to the next emotional trauma – him deciding to protect her against his own brother.

There was a good idea here for the story, but each emotional movement was truncated; each action seemed to spring out of nowhere.  Every time we got to a good emotional part, we were rushed through to the next emotional turn.  There were a lot of spaces in between the emotional movements that needed fleshing out and ultimately the story felt vapid.  C