REVIEW: The Secret of Ella and Micha by Jessica Sorenson

This book sat on top the Bestseller list for weeks and I bought it based on chatter over at Goodreads.  It fits into the New Adult category featuring post high school protagonists trying to figure out how to tame the world that is open to them.  This title was self published when I purchased it but has since been acquired by Forever, an imprint of Hachette. 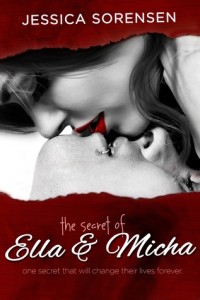 There really isn’t any secret either. Micha’s father left him and his only life now seems to be winning Ella.  Ella’s secret is basically revealed in the prologue.  She turns from the fun loving hard rock chick who went to drag races with Micha and laughed at the popular kids to a buttoned up mini version of a Stepford Wife due to her mother’s unexpected death.

From the beginning, I struggled with the book.  After the tragedy in Ella’s life, she ran off without telling anyone to college in Las Vegas, remaking herself from a poor jeans clad goth girl to a sweater set and pearls uptight whatever. Let us just stop here for a minute. Ella is supposed to be incredibly poor yet she can go to college in an entire different state, afford a new preppy wardrobe, and remake herself with no visible means of income.

The book tries hard to up the angst.  Ella opens the book with a drug induced unintentional suicide attempt, taking pills her mother took in order to feel “invincible”.  Micha saves her and tries to profess his love for her, but not wanting that Ella kisses him.  Fast forward eight months to Ella’s return home after college.  Micha has spent eight months searching for her, calling various colleges and universities in hopes of finding her when he finally spots a picture of her on the internet in … Las Vegas.  This is all unnecessary filler because Micha needs to look no farther than next door. Ella has returned home.

The inclusion of scenes and emotional arcs that go nowhere are scattered throughout the book like chicken feed scattered haphazardly on the ground. It’s a mixed up jumbled mess.  There is little continuity.  In order to evoke a necessary emotion, a situation will be written in and then it will be ignored in the very next section.   Despite the constant emo mewling of the characters, they are pretty shallowly drawn.  Ella is a hurt girl trying to remake herself and Micha is the somewhat pathetic “hot guy” who can’t understand why she ran away but will do anything he can to keep her with him, including giving up everything he has ever loved.

Ella’s repeated insistence that she and Micha are friends looks like rank stupidity in light of the way that he is constantly touching her, kissing her earlobes, finger combing her hair, and stroking her thighs.  He says things like “God I’ve missed your smell” and “you drive me crazy”.  Later we are to believe this is new behavior for Micha because up until Ella tried to jump off the bridge, they’ve only been friends.

Ordinarily, the non stop attentions of Micha might have been irritating but in this story, with both points of view and Ella’s obvious appreciation for those attentions, it was hard to figure out exactly why she was resisting Micha.  There are parties, band scenes (Micha is supposedly an amazing musician although that and his tattoos and piercings seem more for show than a true integration into his character makeup), other girls, drag races, and more parties but the serious issues of mental illness and suicide are never really dealt with.  I suppose the message is that the love of a hot band boy will save you from all mental trauma, but it’s not a message that resonates with me.

There was a good idea here but this book felt like a rough draft and needed at least one good edit to smooth out the inconsistencies.  D