REVIEW: Against a Wall by Cate C. Wells

This contemporary romance came up after I did not finish the first book in this series, Hitting the Wall. Commenters on the review described this one as better and I was in the midst of a three-month free trial of KU, so I decided to give it a shot. 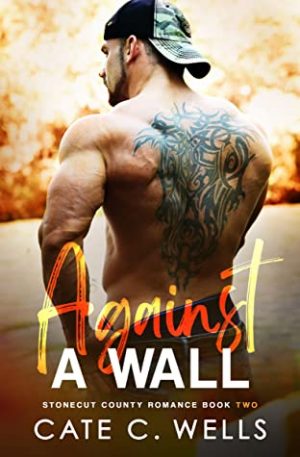 Glenna was bullied by Cash in middle school and high school. Even in adulthood, Cash makes fun of her. The book starts with Cash showing up at the cafe where Glenna works and mocking her, then loosening the lids on all the sugar jars (there’s one at every table). Glenna, who was recently dumped by her co-worker boyfriend, Toby, feels miserable when the sugar pours out all over the table in front of the customers who were in on the joke. She responds by removing the truck nuts from Cash’s truck (yes, he’s the kind of man who has truck nuts) to get him back.

To protect her father, the owner and editor of the local newspaper as well as the writer of an article about a scandal the sheriff is involved in, Glenna put the article under her byline. The sheriff is beloved by many and now tensions are high in the area. Glenna is on the receiving end of a lot of anger and cold shoulders.

Cash owns a business giving hunting and fishing tours on a mountain where Glenna, who wants to start a photography business, takes photographs. She’s sitting still taking one when one of the hunters Cash is guiding shoots her in the arm. Cash is frantic to help her and assists her down the mountain. He’s been secretly in love with her for years.

There’s also some history with Cash’s sister, Dina, who is neuroatypical. Dina and Glenna were close friends as children but Glenna dropped Dina in middle school after she overheard something really mean Cash said to his friends while she was visiting Dina—that Glenna was the chairman of the itty-bitty titty committee (why he said it is eventually explained).

Glenna never explained the reasons she stopped going over to Dina’s to Dina or anyone else, and to this day, there’s tension between her and Cash’s family members. Tension that is exacerbated by the fact that the article she “wrote” about the sheriff has led to an FBI investigation and the sheriff, a good family friend, has been forced to go on leave.

Eventually, Cash proposes to Glenna that they fake date so that she can get back at Toby and he can repair this reputation and that of his business after the shooting. This is more of a ploy to get involved with her than anything. Glenna plans to refuse but just then she sees Toby with his new girlfriend and she plants a passionate kiss on Cash to show Toby that she doesn’t care. The kiss is hot but more to the point, she now has to go along with the fake dating, at least for a little while.

Cash and Glenna’s “first date” doesn’t go well; a female friend of Cash’s is jealous and mean to Glenna. But Cash keeps trying to win her over. As he realizes how hurtful his behavior has been, he apologizes and makes up for it with better behavior.

This book was indeed better than Hitting the Wall, but I was still underwhelmed. The plot was slight; after a fair amount of buildup about threats that Glenna’s father has been receiving because of the article on the sheriff, we get very little payoff.

Cash made genuine efforts to make up for his actions and I believed he was sincere in his apologies and gestures, but I still didn’t like him. I often find good ole’ boy characters irritating and that didn’t help. I didn’t understand why the town loved Cash so much, beyond the fact that he was good looking, smiled a lot, and came from a powerful family. I guess that’s enough reason for many people but given his jerkiness to Glenna it seemed to me that someone besides her father should have been on her side. And why didn’t Glenna have any friends as an adult? That didn’t fully make sense to me.

In any case, Cash’s popularity, his remorse, and his attempts to make up for the past weren’t enough to make me love Cash like the townspeople did. I guessed that this book probably wasn’t for me after Cash helped the injured Glenna pee behind a bush on their way down from the mountain and got turned on as he was helping her pull her pants back up. Really? Also, I was bullied in school myself so it’s hard for me to see this setup as romantic.

I wasn’t a fan of Glenna either. She was morose and her low self-esteem annoyed me after a while. Yes, she didn’t deserve to feel bad about herself and yes, she was aware that it was a pitfall of hers. But I wanted her to get beyond acknowledging the issue to overcoming it, and I felt that could have been signaled more clearly. Just as I felt that Kellum needed to go beyond being good to Shay for me to be convinced that he had redeemed himself, I needed Glenna to go beyond deciding that she wanted to be with Cash to believe that she got her self-esteem back. I would have liked to see her make a friend and take her photography business further. That would have made her growth more convincing and satisfying.

Glenna’s response to something that happened as part of the dark moment was also really dissatisfying and read like a setback.

Glenna’s childhood backstory with Dina felt flimsy. If Glenna didn’t want to go to Dina’s house anymore, why didn’t she just invite Dina to hers? Dinah and Glenna could also have hung out somewhere else–the school grounds during lunch break, a quiet park, or at Glenna’s house. And even if Dina wasn’t up for that because of her disability, suggesting it would have at least allowed Dinah to know that Glenna still cared about her and liked her.

Toby was portrayed as a stereotypical small-town hipster wannabe and I felt he was a flat character and too obvious a punching bag. I would have liked to see a little more complexity there. He had used Glenna and gaslighted her so I also wanted to see him suffer a little.

As a vegan I was annoyed by the way veganism was attached to Toby. Vegans are so often stereotyped in books. Why??? Many of us are normal people and different from everyone else only inasmuch as that we don’t want to support the killing of animals. What’s so bad about this that we have to be stereotyped as weirdos with ridiculous reasons for our eating choices?

I was also annoyed that Cash and Kellum’s parents had apparently not gotten the memo about the sheriff from Shay and Kellum, and that Shay, who had been railroaded out of town by the sheriff as a teen, had to put up with hearing him praised at a dinner in their house. It’s a good thing I was partly prepared for that (Rose had warned me) but it still bugged me.

There were some nice things in this book. I appreciate that Cash’s reformation was genuine. He was too mean in the very beginning of the book for his backstory to make complete sense, but I went with it because I liked his efforts to do better.

I also liked that Glenna’s hair was blue—it gave her some individuality. I liked that her father was a left-leaning deadhead despite the fact that the town was almost certainly predominantly republican, although I felt like it would have been nice to have more insight into him. He went against the grain pretty hard in a place like Stonecut Country and got a lot of pushback, and though I’m sure his motives were genuinely good, it would have been more satisfying to get a deeper look at him and at them. I really liked Cash’s friends, the Carrols. There was a lovely moment involving Cash’s mom and the sheriff’s wife near the end of the book. Dina had a cool treehouse.

Other than that, eh. I’ve now tried three Cate C. Wells books. This one was the best of the three but still meh, so I have to conclude that this author’s voice doesn’t work for me. C-/C.