I picked up Hitting the Wall, the first contemporary romance in your Stonecut County series, because it came highly recommended by commenter DiscoDollyDeb. That it was included with my limited-time free trial membership in Kindle Unlimited made it easy to try; I don’t think I would have paid for it. Hitting the Wall had some things going for it but also some real issues and I quit at 44%. 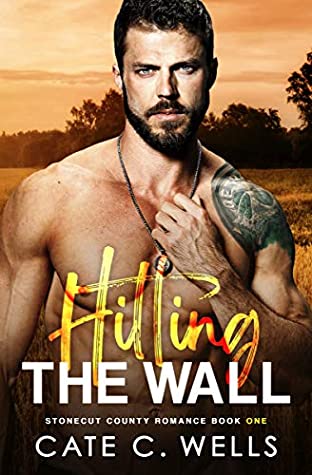 The first chapter here is essentially a prologue. Shay Crowder, a seventeen-year-old girl, is being railroaded by three men – Mr. Wall, Stonecut County’s most powerful and wealthiest rancher, Mr. Price, a successful businessman and friend of Mr. Wall’s, and the sheriff. This power gap is accentuated by the lollipop Shay keeps palming in her pocket for comfort. The confrontation is happening because she’s pregnant with the hero’s child and she is only seventeen whereas the hero is twenty-four.

Kellum Wall, the hero and Mr. Wall’s son, has no idea that Shay is that young. She had only recently moved to town to stay with her grandpa before the one time they had sex, and an older friend of hers had lied to Kellum about her identity. Kellum was also drunk. He had just broken up with his longtime girlfriend, Elizabeth, who decided she wanted him back shortly after that night.

The sheriff informs Shay that while sixteen is the age of consent in many cases, for a twenty-four-year-old man to have sex with a seventeen-year-old-girl is nevertheless a statutory sex offense and a crime, corruption of a minor. If it were true that it really happened, which of course it isn’t, says the sheriff, it would cost Kellum his job since Kellum is a police officer.

Of course, the sheriff has no inclination to arrest the man he calls a “stellar, up and coming young officer,” and who is also the scion of the town’s wealthiest and most powerful family. The sheriff even rests his hand on the butt of his pistol. But Shay knows that if her pregnancy were to become public knowledge, the sheriff might not have a choice. The scandal would be heard of far and wide and Kellum’s reputation would also be destroyed. Despite the confrontation, Shay doesn’t want that for him. Not only that, but Kellum’s father is Shay’s grandfather’s employer and landlord, so her grandfather, the one member of her family who cares about her, could be fired and evicted if she stays and makes life difficult for Kellum. Reading the writing on the wall, Shay promises to leave.

Mr. Price comes back a little later and gives Shay money for an abortion. Shay leaves the county, but she keeps both the money and the baby. She struggles on her own for seven years, until a day arrives when she can’t pay the rent and she (now twenty-four) is forced to return. Her daughter, Mia, is a little girl of six and she is on the autism spectrum (I don’t feel qualified to judge the quality of the neurodivergence representation in the portion of the book that I read). Shay and her little girl have been living hand to mouth for all these years, but now Shay’s grandfather is dead and though his longtime girlfriend lives in his trailer, Shay hopes she’ll be able to stay there without Kellum’s knowledge. She has no other place to go.

Kellum was aware of none of this. Not that Shay was seventeen, not that she got pregnant (she tried to call him to let him know but Elizabeth was with him and got annoyed, and to satisfy her he cut the call short and blocked Shay’s number), not what his dad, boss and Mr. Price did. Now he is the Deputy Sheriff and no longer with Elizabeth. Driving down a road to investigate a case, Kellum spots Shay and Mia walking by the side of the road carrying laundry on a hot day. He stops and quickly recognizes Shay. He realizes Mia is his because she resembles his (also neurodivergent) sister. Though it isn’t easy, he convinces Shay to let him give them a ride.

Her grandfather’s old trailer is overly hot and unsafe for a child, and when Kellum points this out and asks her to move into his house with Mia, Shay reluctantly agrees because she has few other options. Kellum admires Shay’s backbone and he’s also very focused on getting to know Mia and on keeping her safe and cared for. The latter was one of the few things I liked in him.

Soon after this, Kellum has it out with his family. But though he’s angry at them for all the years with Mia their actions cost him and even hits his brother for telling his father but not him about the pregnancy all those years ago, he doesn’t seem to fully grasp just how horrible his father, the sheriff and Mr. Price’s actions must have been for seventeen-year-old Shay to endure, and he still tries to rationalize it partly away. Kellum’s mom had no idea of all this either and she wants to see her grandchild, but Kellum is afraid that Shay will take Mia and split at the slightest hint of any possessiveness, so he tells his family to back off.

Of course there’s an incendiary attraction between Kellum and Shay. Neither ever felt like this about anyone before the one time they hooked up, and now the feelings come roaring back. Reading about how Kellum had never felt such an astonishing level of attraction as when he first saw Shay or ever had a hotter experience than the one he had that night made me uncomfortable given that Shay was only seventeen then and he was twenty-four.

There are good things to be said for the book. Shay is easy to like, a survivor who knows she doesn’t deserve the treatment she got and who stands up for herself with a combination of dignity and wounded pride. To be sure, it would be hard not to like a heroine who was chased out of town at seventeen while pregnant and had to raise her child in poverty, all the more so when the child has special needs that added to the challenges. But Shay’s scrappiness and her determination to protect herself and Mia add a lot to her characterization too.

Wells is also pretty good at conjuring an atmosphere and portraying a gritty milieu. Wealth inequality is more than subtext here, and it isn’t glamorized. The neglected trailer park, the flip-flops Shay wears, her and Mia’s shabby clothing and the way they carry laundry baskets for two miles without even a water bottle in the heat are contrasted with the comfort Kellum and his family live in, the ranch and horses they own, and the power they hold in their community. All of this might have made me inclined to read on if Shay had been paired with someone other than Kellum. It doesn’t bode well for a romance when the number one thing I dislike about it is its hero.

Kellum had sex with Shay against a tree, even though she was a virgin (which he didn’t notice, natch). He also didn’t think of using a condom until Shay insisted (he had to pull out to put one on). He didn’t notice when the condom broke either. We’re told he meant to make love to her again, more gently, by the river, before an emergency called him away, blah blah blah—so he probably wasn’t even entirely off-duty.

Furthermore, Shay was drunk (at one point, Kellum thinks “I left a naked, seventeen-year-old drunk girl alone by the side of a river.”). Not only could she have stumbled and fallen into the water and drowned, but sex with an intoxicated person is rape, period, no matter how old she is. Even if that wasn’t the law in Kellum’s jurisdiction, it certainly is in other states. Kellum couldn’t have been unfamiliar with this concept. He was sworn to uphold the law.

(Since he’s a police officer, I think it’s also valid to ask if there was there a designated driver who was going to drive him home. I certainly didn’t get that impression.)

Further, if he’s halfway perceptive, as he later shows himself to be (though to be honest, I had a hard time viewing him that way even so because of all that had gone down back in the past), then how could Kellum not have questioned Shay’s age at least a little? There’s no indication in the book that she looked or acted older than seventeen, and while he was told that she was someone’s out-of-town hairdresser cousin, that’s not a guarantee of anything. Pandy, the woman who told him that, was the area’s troublemaker.

The whole thing was discomfiting and it was hard not to squirm when Kellum reflected on how hot it had been. The fact that he hung up on seventeen-year-old Shay and blocked her number when she called and tried to tell him that she was pregnant made it even worse. Shay was still young enough to, when threatened by three men, take comfort from a lollipop.

Then there’s the fact that Kellum’s family has so much while Shay lives on the edge of hunger. The wealthy hero and the down-on-her-luck heroine is, of course, a staple trope, but here it was accentuated by the fact that Shay had nowhere safe to go when she left and no better choices she came back, that she had almost no money and little to eat, that she and her child are too thin, and that she was so young and on her own with a little girl, and a little girl who required special care. The power divide was very wide, and I felt that the author was capitalizing on that power gap.

The fact that Kellum had all these societal, financial, and familial protections bothered me. Wells made it evident that Shay would not have come back to Stonecut County if she had other options, or moved in with Kellum if she’d had other ways to provide Mia with safety. I wasn’t happy to see Shay saddled with him, and his societal, financial, and familial advantages were the means by which this saddling was taking place. They didn’t make him good enough for her. In the 44% I read, Shay never felt forced by Kellum in any way, either as a teen or as an adult, but if she had to choose someone as lackluster as him I wanted her to at least choose him from a position of greater empowerment and strength.

The book is also really slow. Though the first chapter is, like some of the others, wordy and repetitive, the beginning has some momentum. I continued reading because I wanted to see Shay get some emotional justice. But after Kellum’s fight with his family I lost interest. Kellum’s family isn’t particularly interesting or entertaining and in the middle section I got bored.

As readers of this review can probably tell, the romance itself didn’t really work for me because I didn’t like Kellum. I couldn’t help seeing him as someone born with a silver spoon in his mouth, and while he does feel guilty and bad for his actions when Shay was seventeen, I somehow doubt that by the end of the book he turns himself in for corruption of a minor and begins to pay his debt to society. If I hear that I am wrong on that score, I might be a little happier with this book. DNF.

→ Janine
Previous article: REVIEW: The Friendly Air by Elizabeth Cadell
Next Post: CONVERSATION: Where Do You Stand on Anachronisms?