How to Save a Life by Sloan Parker

Reporter Kevin Price has a knack for tripping over his own feet. And everyone else’s. He’s in over his head undercover at the Haven, a swanky gay sex club, determined to find out why members of the club keep vanishing. Five minutes inside and he can no longer deny the truth about his sexuality. He turns to the one man he can’t get out of his head, the sexy ex-cop handling security. Too bad Kevin doesn’t trust cops. Not since the only night he let himself be with another man.

Walter Simon doesn’t do the club scene anymore. Not since he found love and lost it. That doesn’t mean he’ll let anyone hurt more innocent gay men. Even if that means going head-to-head with the klutzy, closeted, much-younger reporter. Kevin has information about the disappearances. Better to keep him close. And safe.

Neither is at the club to hook up or fall in love. Now they must work together amid their growing passion in order to uncover the truth before more men disappear.

I really liked Walter and Kevin from the moment I “met” them on page. Walter seemed like a very decent man helping his friend to investigate the disappearances of the men from the sex club. 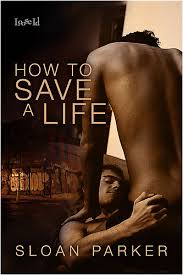 Kevin was adorable, and I thought his nervousness and trying to come to term with his desires, while trying to conduct the investigation was well portrayed. I also thought that from the moment they met their chemistry was off the charts. I liked that Walter was sweet with Kevin despite his gruff exterior of former cop and Kevin’s chattiness just seemed to fit his character so very well.

There is twenty year difference in their ages, and I actually thought they fit together nicely despite such huge age difference, if Walter would not keep reminding me about their age difference over and over and OVER again. I did understand it after I have read something like this for the umpteenth time that he is obsessed with their age difference. There was no need for further repetition.

The action had his light brown hair stuck up all over, leaving him looking five years younger than he had a moment ago. Great. Like Walter did not already feel ancient next to him.

Only he usually did not feel that way with Kevin. In the past forty-eight hours he’d felt younger than he had in years.

“We already covered this. I look young for my age.”

“Yeah.” Walter stepped back and ran his hands through his hair. His spent cock lay outside his open pants. The always-together former cop had never looked so disheveled, so unsure. “I’m old enough to be your father”

The book overall was a mixed bag for me. This is mostly because according to the publisher it also belongs in the “mystery/suspense” genre. While I would agree that some parts of the book could be characterized as suspense, I take a huge issue with “mystery” characterization. I am really tired of mm romances that claim to want to be mysteries, but their main purpose seems to be to have guys having a lot of sex no matter what they were supposed to be doing – be it investigating stuff, catching the bad guys, or what have you. The way I see it if the main purpose is to get the guys together to have sex, there is no need to distract them with investigations if they are going to forget about investigations the first chance they get.

Initially Walter wants to talk to Kevin because he suspects that Kevin has the information about the disappearances. The talk turns into sex pretty fast. Kevin is deep in the closet, but of course here comes Walter and the walls fall down and fast. Walter is supposedly concentrating on the case so hard and all that concentration goes down south where Kevin is concerned and repeatedly so.

He was seriously losing it. Practically fucking with their clothes on in the bathroom of a stranger’s apartment while they looked for clues to find said stranger. He’d never been so out of control while working on a case.

Basically I was not impressed with the “mystery/suspense” part of this story at all. Even if we forget about continuous sex interruptions of the actual investigation because Walter and Kevin cannot keep their hands off each other, there are several instances in the course of the story where Walter for me did not fit the part of experienced ex-cop turned private investigator.