I bought this book several weeks ago after another of your books was featured in one of our daily deals. I’ve always meant to get back to your trad regencies after enjoying “Mad Maria’s Daughter” and the description of this one made it look like slightly madcap fun. The positives of star crossed lovers, a stolen painting with Deep Significance and lots of family connections are undone by a meandering plot and dry romances that seemed to drag more slowly the further I got. 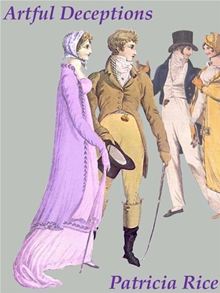 I have to be honest and say that this book sounded better in theory than it turned out to be in reality. Generally I enjoy a mismatched lovers plot – but with the caveat that I know who belongs with whom – which can be a goldmine of opportunity for fun as they and those around them zig zag and backtrack to a HEA . Here I was initially unsure for quite a long time of exactly what the final pairing would be which made me feel off balance. It’s a personal bugaboo but I want to know who to root for romantically. Eventually the pairing became clear but the romances still left me unsatisfied for a number of reasons. First, all four characters are stubborn and too mule headed for most of the book. Watching them crack heads, seemingly willfully disbelieve their own feelings and those of others quickly moved past interesting and into boring. How many times would they spout the same nonsense? How many times would another character attempt to talk sense into someone? How long would the misunderstandings continue? It felt endless. Arianne is practical and Melanie is emotional and they both managed to annoy me as one obstinately refuses to see love in front of her and the other mulishly pushes for love Right Now just because she wants it Right Now. The hero who dodges her sulky self is the lucky one, IMO.

The heroes aren’t much better. Galen has decided he’ll make an offer more because it’s expected, does so and is rejected. His next offer takes place practically overnight and he can’t see that the new woman he offers for has trouble believing his sincerity? At this point he decides to pursue this romance slowly which then drags this relationship to a crawl. Meanwhile, Rhys has muddied the waters by seeking a marriage of convenience despite being madly in love with another but refuses to act on that due to family circumstance. He practically has to be dragged, kicking and screaming into admitting his love and even then refuses to make a bid for true love. At this point, I simply wanted to kick some sense into the four of them as there appeared to be no HEA in sight.

The book is further hampered by one of my least favorite stock characters: the muddle headed, idiot father. Dumbass fathers/husbands who can’t get their heads out of their cracks to realize the appalling mess their moronic selves have created by their endless devotion to something stupid drive me mental. His wife’s health is declining, his eldest daughter is left to try and keep his other neglected children from acting like monkeys in a zoo and daddy dearest can only rarely pull his head out of a fog to acknowledge they exist. Most of the other characters merely wander through the story from time to time in order to force me to try and keep yet another of them straight in my head.

There is a long held secret to be uncovered but by this point, I just barely cared enough to keep reading. With one couple held at arm’s length by the hero’s pride and the other only slowly getting to know each other, the romance is pretty dry here. By dint of skimming I got the the end but the payoff didn’t match the effort expended to get there. D