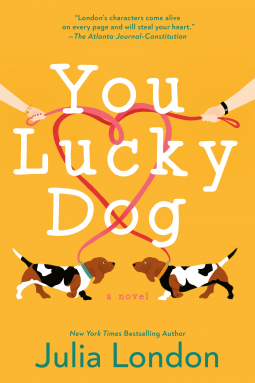 Carly Kennedy’s life is in a spiral. She is drowning in work, her divorced parents are going through their midlife crises, and somehow Carly’s sister convinces her to foster Baxter–a basset hound rescue with a bad case of the blues. When Carly comes home late from work one day to discover that the dog walker has accidentally switched out Baxter for another perkier, friendlier basset hound, she has reached the end of her leash.

When Max Sheffington finds a depressed male basset hound in place of his cheerful Hazel, he is bewildered. But when cute, fiery Carly arrives on his doorstep, he is intrigued. He was expecting the dog walker, not a pretty woman with firm ideas about dog discipline. And Carly was not expecting a handsome, bespectacled man to be feeding her dog mac and cheese. Baxter is besotted with Hazel, and Carly realizes she may have found the key to her puppy’s happiness. For his sake, she starts to spend more time with Hazel and Max, until she begins to understand the appeal of falling for your polar opposite.

The blurb for “You Lucky Dog” seemed to promise a fun, contemporary romance. Plus basset hounds. I was unable to resist giving it a try. The opening scenes are told from an omniscient narrator’s POV but soon, this ended. I liked a lot of the book but towards the end, I realized that there were a few things that annoyed me, too.

The set-up with a basset hound switch leading to the main characters, Max and Carly, getting together worked better than I thought it would. Max and Carly were given backstories and jobs which we learned a lot about and which were important to them. I loved how Max’s knowledge of neurochemicals came into play when he was around Carly and thought about the boatloads of dopamine her presence dumped into his bloodstream. His area of research was fascinating as well and was born of someone who was very important to him. Carly’s job in public relations was a bit more generic but she was giving it her all and trying to do great things for her – frankly – idiotic clients. But the number of times she’s turned into a doormat for her sister was annoying.

The humor made me chuckle —

“We have to get out of here before you eat my house.”

The dog responded with excited tail wagging as she trotted alongside Carly on their way down the hall. “If you’re wondering who is responsible for this disaster? It’s Brant, your former dog walker.” She opened her front door. “Just so you know, he’s a dead man walking, so FYI, you may not be romping around Lady Bird Lake next week. He’s dead just as soon as I get Baxter back.” The dog gazed up at her with adoration. “No offense, Bubbles.”

Judging by the wag of her tail, it didn’t appear that any offense was taken.

Once Max and Carly met, they did not have an attraction leading to an immediate relationship. There was a teensy bit of friction as Carly let Max know her views on dog ownership and Max was stunned and confused as to exactly what Carly was wearing (one of her client’s haute couture creations). Carly also thought Max might have punked her into dog sitting for him. But soon they discovered they could relax around the other and began to look forward to dog outings. The continuation to some hawt sex was given time to percolate but once they dove into things, the relationship moved very quickly to deeper feelings. Maybe a bit too fast for what I saw on page. But still, the dogs were cute and I was invested.

After a while, a few things began to dim my initial enthusiasm. The humorous zinging one liners that were all over the first chapters started to fade out as the book delved into more serious issues. I can understand the reasons to be more serious but I missed them. Then came the big surprise. I’ll try to avoid spoilers – even though it was fairly obvious what was about to be unloaded on Max and Carly. Once this entered the storyline, Max and Carly both stepped down a notch in my estimation. Yes, this is a romance that is mainly focused on them but their reaction was like sand in the vaseline. Suddenly instead of looking at how this event was going to – mainly – affect the other people involved, it was all them, them, them. And their “them” was in the nature of sulky and slightly petulant children. Now it’s not as if they didn’t have some legitimate concerns but those could have been addressed much more maturely instead of the way they were.

There was a profoundly autistic character in the story. He was very important and I think was depicted accurately, but he was more there as a means to an end, a construct to move the plot and the relationship forward, rather than a fully-fledged character with his own arc and agency. Max’s relationship with his brother was a nice mix of love and caring but also concern and, at times, frustration. That might not seem to show Max in the best light but it felt honest. Carly’s family members were also problematic for me as they appeared to be more caricatures and two dimensional than fleshed out characters. Carly’s mother needed a thump on the head for some of her actions and the sister was a hot mess.

The last third of the book seemed a bit darker to me and there was a whopper of a final conflict. The relationship between Max and Carly also confused me as at one point it seemed that both sides had decided to end it, then no, then yes again, then no. The final reconciliation allowed both sides to have worked out what they wanted and tried for their dreams so that was nice.

I was looking forward to a cute rom-com and that was partly what I got. The book seemed to morph into self discovery and family drama.But somehow the end result didn’t equal the sum of its parts. There were aspects I loved, parts I definitely laughed while reading but there were also things that bothered me. The blurb is sweet, the cover is cute but it just didn’t check all my boxes. C+